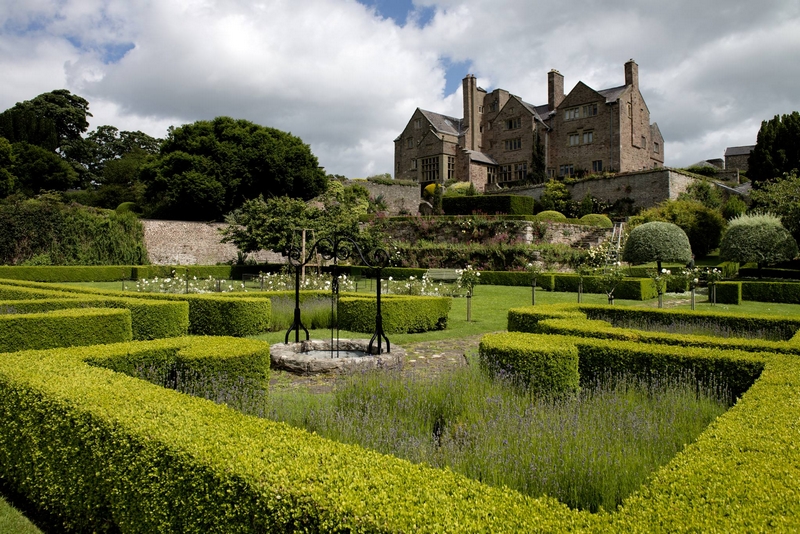 This article titled “Room with a bloom: 10 beautiful garden getaways in the UK” was written by Genevieve Fox, for The Observer on Sunday 21st April 2019 06.00 UTC

Bucolic bliss awaits at Barnsley House hotel in Cirencester. Redesigned by Rosemary Verey in the 1950s, its 11 acres combine formal gardens, clipped yews, rock roses and mixed borders with an ornamental fruit and vegetable garden that gives on to wild meadows. The laburnum walk is Barnsley’s showstopper, but look out, too, for the frog fountain and, at the other end of the long vista, the whimsical, classical Temple reflected in an octagonal pool. A fabulous spa is hidden in one corner of the garden and the grade II-listed 17th-century manor house has the lauded Potager restaurant and 18 chic bedrooms. Think taupe, splashes of colour and rub-a-dub-dub freestanding bathtubs.
• Doubles from £224 room-only, barnsleyhouse.com. The garden is open year round to guests. Non-guests £15 entry, including tea and biscuits

The Georgian palace of Ickworth is a corner of classical Italy in rural Suffolk. Orderly corridors of box hedge, flat lawns and sky-topping cypresses provide a dramatic evergreen setting for the neoclassical rotunda of the main house, created in the 18th century for Frederick Hervey, 4th Earl of Bristol. A perfect semi-circle of raised promenade runs around the garden, looking inward over a lugubrious stumpery of upturned roots and outwards over Ickworth’s vast meadows and parklands to the flat landscape beyond. In the spring, there are carpets of snowdrops and aconites.

Take a quiet moment in the Temple Garden with its classical summerhouse and Mediterranean herbs, grasses and perennials. A short walk downhill from the formal gardens takes you past Ickworth’s ancient church and into the largest walled garden in East Anglia. Chickens drill and scratch through this five-and-a-half-acre wonder, right up to the door of Gardens House, formerly home to the estate’s head gardener. Now available for holiday rentals through the National Trust, the three-bedroom cottage boasts two private gardens of its own, one filled with espaliered fruit trees, the other backing on to a lake. Dogs (up to two of them) are welcome, too. Guests of the cottage have access to the main house and Italianate gardens, particularly wonderful out-of-hours when the daytrippers have gone home.
• Stay at Gardens House sleeps 6, from £445 for three nights, nationaltrust.org.uk. Price to visit Ickworth’s parkland and gardens only, £10, open daily 10.30am-5.30pm

Tresco is a family-owned island, 30 miles off the coast of Cornwall. The sub-tropical Tresco Abbey Garden has been dubbed Kew without the glass and the dazzling gardens are built around the ruins of a Benedictine abbey. Even the most hardened urbanite will relish exploring the 17 acres of perennials. You can enjoy whimsical features, such as two cross-walks, a walled garden, terraces and a fantasia of plants from around the world.
• There is a wide range of accommodation on the island, including self-catering cottages and the 16-bedroom New Inn, with rooms from £170 B&B, tresco.co.uk

Stay at the tranquil Cider House B&B within the grounds of the 700-acre, 13th-century Buckland Abbey Estate on the edge of Dartmoor National Park in Devon. Sir Francis Drake’s former home is owned by the National Trust, and you can pretend you’ve come indoors after a day’s pruning in the Elizabethan gardens or the enchanting kitchen garden, or a romp through the meadow. Guests at the contemporary four-bedroom boutique B&B enjoy free access to the Abbey and its stunning gardens.
• Doubles from £160 B&B, cider-house.co.uk

As B&Bs go, Austwick Hall may only have four bedrooms but the Tudor manor house is a grand affair with an imperial staircase, four-poster beds and curios and antiques aplenty. Set in 13 acres, the terraced Italianate gardens are a similar delight and boast long herbaceous borders and ancient woodlands peppered with Martagon lilies and Asarum europium, with sculpture trails as well as an outdoor wood-fired hot tub.
• Doubles from £125 B&B, austwickhall.co.uk

The Salutation in medieval Sandwich is an exquisite boutique hotel with whimsical gardens and eight bedrooms in the Grade I-listed Queen-Anne style masterpiece of a main house. Designed by Edward Lutyens in 1912 and inspired by his longtime collaborator Gertrude Jekyll, house and garden vie for best in show. A succession of separate gardens, or rooms, flow into each other as effortlessly as the eye is guided to the garden’s vistas, terraces and features, including the joyful grass meadow planted with over 40,000 bulbs, and the long border, that includes over 40 species of tulips. Enjoy afternoon tea on the East Terrace, opera and a picnic on the lawn as part of the inaugural Pelagian Opera Festival in weekends in June and July, then luxuriate in the sumptuous bedrooms, which include Emperor beds with views that include the long border and the bowling lawn.
• Doubles from £243 B&B, the-salutation.com. Garden entry for non-residents £8.50 (children free); free garden entry with afternoon tea bookings

Seventeenth-century Bodysgallen Hall, a 31-bedroom hotel with cottage suites, sits on Pydew Mountain near Llandudno within 220 acres of its own parkland and landscaped gardens – sea views and Snowdonia in the background are an extra bonus. Now owned by the National Trust, there’s a formal rose garden, a lovingly restored showpiece of a 17th-century box-hedged herbal parterre. Neo-Romantics will enjoy the fortified folly, an obelisk, a rockery with cascade and a Gothic tower. Other amusements include lily ponds and the Woodland Walk, an ancient site that includes a 200-year-old handkerchief tree and the 18th-century Ladies Terrace with views of Conway Castle. Dress up for fine dining in the main Hall, then repair to the floral bedrooms and imbibe the views through the pretty mullioned windows.
• Doubles from £190 B&B, including spa, bodysgallen.com. Gardens open to non-residents visiting the spa

A magical garden need not be on a grand scale, as the third-of-an-acre, steeply sloping walled garden of Millgate House B&B in Richmond testifies. Romantic and densely planted, the garden overlooks the River Swale. Spring visitors can expect “several hundred hostas all just coming into leaf” says Austin Lynch who, with his partner Tim Culkin, bought the property in 1979. Along with clipped topiary and a flight of stone steps, seasonal stars include “epimediums in variety, erythroniums, rhododendrons in flower, lots of rare ferns.” The six bedrooms work a restrained Regency country house aesthetic, and there’s the five-bedroom Coach House, which can be rented via English Country Cottages.
• Doubles from £125, millgatehouse.com. The garden opens daily, 10am to 5pm, until 21 October

Come to the Grade I-listed Endsleigh estate and choose between two very different places to stay: a luxury hotel set on the hilltop with extensive views, or a rustic fairytale self-catering cottage nestling in a dell beside a pond.

Humphry Repton created the wildly romantic Endsleigh gardens in 1814 for the 6th Duke of Bedford and his wife Georgina. The style he deployed on the 108-acre estate was Picturesque: a combination of idealised architecture and landscape (a rose walk, parterre, sweeping lawns, a shell grotto, follies, ponds, rocky waterfalls).

Hotel Endsleigh, set in the former hunting and fishing lodge and now run by Olga Polizzi, sits high above the River Tamar with views across to Cornwall. It boasts an extraordinary herbaceous border, 100 yards long, filled with flowers from April through to the first frosts. Here you can take tea, play croquet or simply gaze at the view unfolding before you.

And the fairytale cottage? One of two rustic cottages on the estate owned by the Landmark Trust, Pond Cottage takes its name from the body of water before it, full of fish and patrolled by a heron. Down in the dell, just a five minute walk from the hotel, there’s no WiFi, no mobile signal, no landline, no TV – a compelling reason to stay. Stepping out through the honeysuckle-covered porch, you’ll find yourself surrounded by secret grottos, carpets of gunneras, streams, waterfalls – and perfect peace.
• Doubles at Hotel Endsleigh from £190 room-only or £235 B&B. Pond Cottage sleeps 5, from 326 for four nights. The garden is open all year to hotel guests and from 10am until dusk to garden visitors, entry £5, free to RHS members (rhs.org.uk)

Glenapp is an arborealist’s dream. Situated near Ballantrae, South Ayrshire, in an area of outstanding natural beauty, the 19th-century baronial castle presides over 36 acres of formal gardens and coniferous woodland. Highlights include champion trees, a giant sequoia, the tallest firs in Britain and a head-turning rhododendron collection. The pleasing geometry of Gertrude Jekyll can be seen in her Italian garden. Work up an appetite with a ramble through the estate and on to Kilphin Glen or a game of outdoor chess beside the azalea pond before taking afternoon tea in the Walled Garden. The hotel itself is sumptuous, with oak panelling, opulent furnishings and spirit-soaring views across the sea to Ailsa Craig, Arran and Holy Island.
• Doubles from £217 B&B, glenappcastle.com. Gardens and the Victorian tea room open to non-residents