SPARE PARTS exhibition at London Science Gallery explores the art, science, ethics and technology of human repair and alteration. Can ‘spare parts’ exist outside the biological body? Are our bodies a sum of independent parts that are regenerated, enhanced, donated or altered? What the future of medical engineering might mean for us all in the near future. 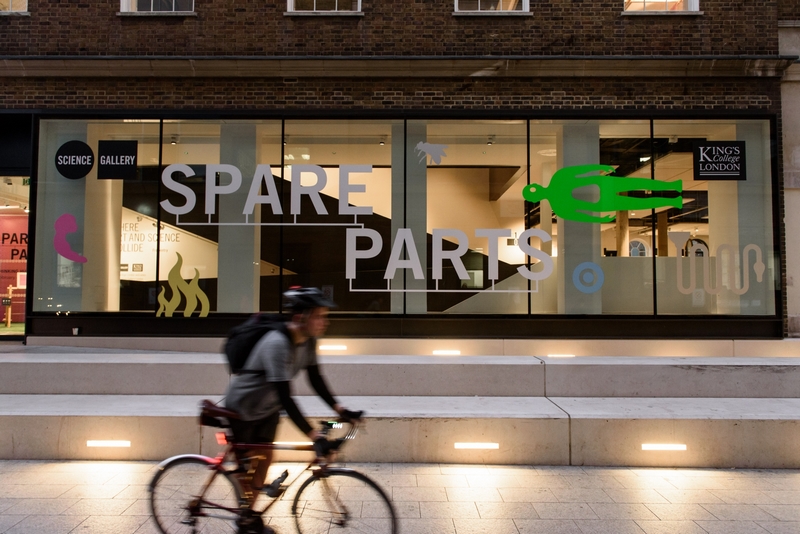 This article titled “Rodent leather and designer kidneys: art in the age of bio-revolution” was written by Stuart Jeffries, for theguardian.com on Wednesday 20th March 2019 11.53 UTC

John A Douglas has a lot to thank medical science for – not least the new kidney he received in 2014 from an anonymous donor. “Since the operation, I’ve become a gym bunny, and lost 35 kilograms,” says the Australian artist over Skype. “But the main thing is I’d be dead otherwise.”

Still, the procedure left him with complicated feelings to process. “I was absolutely devastated after the surgery. At the beginning, you lose your sense of self. I’ve been surgically altered with the DNA and tissue of another person. So in a sense I’m a post-human whose death has been deferred at the cost of lifelong compliance programmes of medication, diet and fitness. My body will be monitored and observed for the rest of my life. In a sense it’s not my body any more – it’s been successfully invaded.”

Douglas isn’t complaining. But he’s keen to take a critical perspective on what has happened to his body since he got the new organ. His latest video and performance piece, Circles of Fire, traces his emotional and physical journey. It features in Spare Parts, a new exhibition at King’s College London’s Science Gallery that uses the work of artists and designers to explore the emotional aspects of living with replacement organs or limbs, as well as the hopes that tissue engineering might help us grow new body parts. It’s an extraordinary show at the cutting edge of science, which also embraces art, ethics, craft and even how we might use compost to create living cells.

The story of Douglas’s contribution to the show starts in 2004, when he went partially blind in one eye – a symptom of the renal disease that had destroyed between 60-70% of a kidney. That disease was the result of the former heroin addict sharing dirty needles from which he contracted hepatitis C. At the time, he was finishing a master’s degree in fine art. What he decided to do thereafter was to make visible the hidden world of the chronically ill.

“I have a chronic illness but it’s not clear to the world that I do,” he says. “I want to make myself visible. And in the same way I want to make visible a lot of things we choose to erase – illness and death being the leading ones.”

So he started expressing his experiences as a patient – “which is often painful or just boring, but I try to make them moving and poetic”. In 2013, for instance, he put on a 10-hour performance while connected to a peritoneal dialysis machine and wearing a metallic-gold skin suit that heightened the show’s very odd nature. “I call it my gimp suit,” he says.

The suit features in other works, such as those that use volcanic and fiery images (including those taken of Turkmenistan’s “Doorway to Hell”) to convey the existential struggles of recovery.

I ask Spare Parts curator Stéphanie Delcroix what the point of her show is. “We’re trying to challenge preconceptions about repairing the human body,” she says. “Quite a lot of it is tongue in cheek, even as it shows off cutting-edge science and our experiences of transplants and tissue engineering. We hope it will be appealing to children and non-scientists.”

She cites two pieces made by artist Svenja Kratz for the exhibition. Monument to Immortality is a live video feed of the cells growing in the gallery and a 3D-printed structure created by translating movement of cells into a sculptural form. The Ghost Writer is a machine that uses a programmed neural network to produce a narrative based on an original text created by Kratz about the prospect of separating the mind from the body and being resurrected as an artificial entity. During the show’s run, it will rewrite the original story.

“They’re deconstructing the idea that tech companies tomorrow will be able to download someone’s consciousness,” says Delcroix. “The artists and designers here are picking through the hype.”

Many of the artists in Spare Parts are doing something else, too – such as imagining a future in which we not only grow organs but also grow clothing materials rather than take them from animals. A few years ago, London-based textile designer Amy Congdon did a project for her master’s degree called Biological Atelier. “It was a speculative design project looking at a potential future for haute couture and fashion, where we might grow luxury and bespoke materials,” she says. In 2080, she imagined, fashionistas might be wearing ethically grown ivory bracelets or sustainable fur jackets whose material would be sourced harmlessly from several different species, including humans.

Where did these ideas come from? “I started from a textile background, learning to knit and do embroidery. Then a tutor showed me a magazine article about how all the craft skills I’d been learning could be used to grow human tissues.” She was especially captivated by artists Oron Catts and Ionat Zurr of the Tissue Culture and Art Project, who had been working on what they called “victimless leather”, coating biodegradable polymer with mouse cells to form connective tissue and topping it up with human bone cells to make a stronger skin layer.

The first victimless leather jacket they made, in 2004, was two inches high and 1.4 inches wide. It would just fit a mouse. But it was revolutionary to Congdon, who travelled to the SymbioticA research laboratory at the University of Western Australia to study with them. “They had this incredible idea that, rather than killing an animal, you’d take cells, expand them in the lab and use that to produce the leather.” This semi-living couture came with a moral lesson. “People were disturbed by the ethics of using living cells to grow living fabric,” Zurr told Wired magazine, “while the use of leather obtained from animals seems to be accepted without any concern for the wellbeing of the animals.”

The cells used in their leather jacket came from a mouse who lived in the 1970s. Since then, Catts and Zurr have taken cells from a frog and grown them into something edible, displaying it next to the still-living frog. The result, Disembodied Cuisine, suggested one way we could make food from animals without killing them.

After working alongside Catts and Zurr (whose Compostcubator 2.0 is exhibited in the Spare Parts show), Congdon returned to London where she is now working with scientists at the tissue engineering and biophotonics department at King’s, using her knowledge of textiles to research the making of couture biological body parts. Her knitting and embroidery skills have turned out to be surprisingly useful.

“One of the key areas of research is the design and development of scaffolds to support cell growth,” Congdon explains. “You need these scaffolds to give cells an architecture on which to grow. And textile disciplines like the ones I’ve learned help create scaffolds. They mimic natural structures in the body, creating bespoke architectures that are often difficult, or impossible, to achieve in other mediums.”

For the Spare Parts show, Congdon has created an installation called Crafting the Body, which explores some of the research she’s doing for her PhD into the making of designer body parts. But why would we want haute couture organs or limbs? “What if they could be beautiful?” Congdon says. “People spend so much time and money getting a beautiful bespoke suit. Why not something for their body or their health? Think of how people will wear fabulous lingerie that no one else ever sees. A kind of gift to yourself. How about if your body needs repairing – say you need breast reconstructive surgery – you do not have a utilitarian replacement, but a bespoke haute couture one, the equivalent of a monogrammed handkerchief? It’s not much of a stretch to imagine that this kind of couture will be developed in the not too distant future.”

The Spare Parts exhibition shows that it is artists and designers like Congdon, as much as scientists and medics, who are imagining and perhaps realising such futures. “I only did science up to GCSE, so it’s been wonderful and completely unexpected that I can get my hands dirty in the lab,” says Congdon. “I’m fascinated by blurring the boundaries between science and design, between medicine and art. It’s like seeing a surgeon as a mix between scientist and artist. Which it should be. Leonardo would laugh at you for supposing they’re different.”

It’s not too fanciful to imagine that in the future we will grow designer livers and limbs and jewellery from living animals’ cells. It’s possible, too, that when someone like John Douglas needs a new kidney, it won’t be something donated anonymously, but rather one grown – and even designed as a thing of beauty.