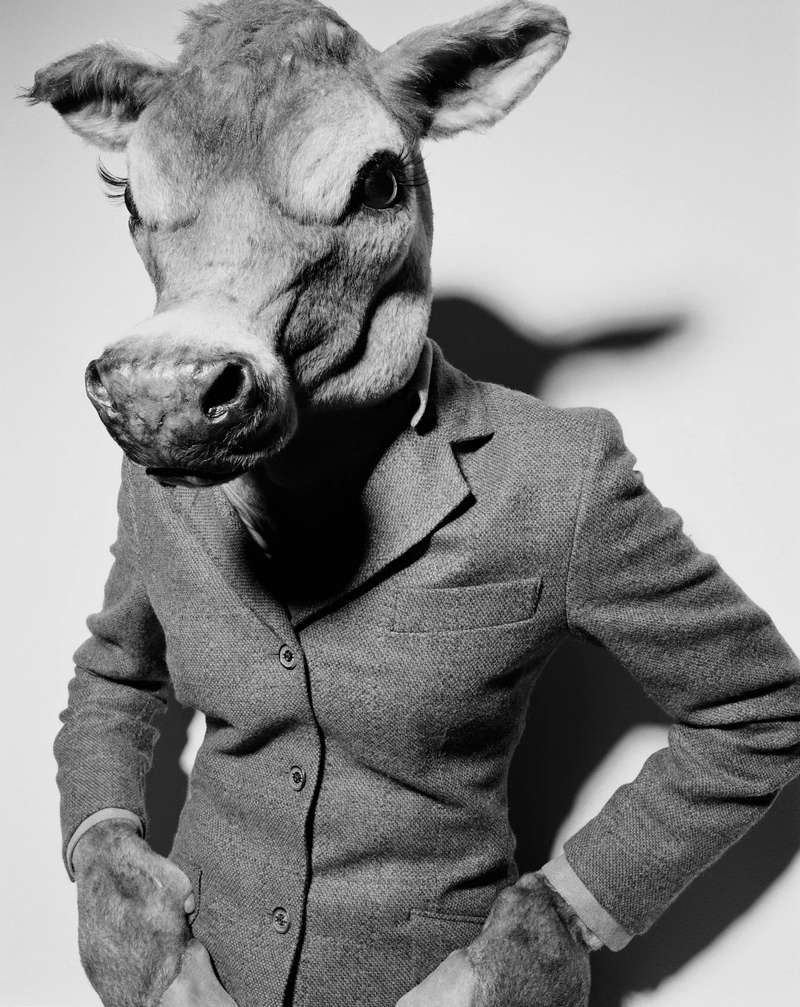 ‘I can’t remember who made the jacket – probably someone really important’ … Livestock 2001 by Rankin (stylist Miranda Almond). Photograph: Rankin Photography

This article titled “Rankin’s best photograph: a supermodel in a cow mask” was written by Interview by Nell Frizzell, for The Guardian on Thursday 8th November 2018 06.00 UTC

This was taken at a time when I was becoming a little jaded about fashion. It’s a commentary on the way I thought some models were treated, right in front of me. I felt they weren’t being treated like people. I had done another project, Breeding, about how models have an almost homogenous look, with everything equal and in particular proportions. So I suppose I was already interested in livestock as a theme.

People always call me a fashion photographer, but really I’m a commercial portrait photographer. I’ve never felt I fully belonged in the fashion world, particularly the churning business side of it all. You hear these ridiculous things, like someone saying: “I have to fly this dress on Concorde!” Why would you ever have to fly a dress on Concorde?

I had done a version of this already at Kentish Town City Farm in 1993, with the stylist Katie Grand. My studio is just down the road and I’ve got a bit of a soft spot for the farm. For this shot, though, we wanted to make it look very realistic so I ended up borrowing someone’s farm in Dorset. Well, I think the farm was in Dorset. I know it was absolutely miles away.

I’m a massive fan of Monty Python and that sort of British comedy. I thought: “Why not do a really funny fashion shoot actually about cows and sheep?” Fashion can be so absurd: I just wanted to put a mirror up to it, do something ridiculous. I knew people would either really like it or be really annoyed by it.

I once did a cat fashion shoot. The owner had given his pet so many treats, it had put on weight

It was a fun shoot, but it was uncomfortable for the models. We used a cow barn, a pigsty, and a sheep field. This one is from the barn, where we also set up a white studio. I shot the cow with Polaroids, both sides, to make it look hyperrealistic. But I also used the Mamiya RZ67 I had back then. I do that sometimes: double up on cameras, just in case one approach doesn’t work.

There was just something funny and silly about bringing a model on set, then putting hooves and a cow mask on them. It could be anyone under there. I can’t remember who made the jacket – probably someone really important who I’ve now forgotten.

I’ve always loved animals. A few years ago, I became a vegetarian. I have three dogs and I take photographs for Battersea Dogs & Cats Home. They’re beautiful to photograph. Every year, my wife and I do a dog calendar for the family – pastiching film posters, classic album covers, that kind of thing.

I once did a full cat fashion shoot. We had all these outfits made for the cat, based on Prada and Chanel stuff. But the owner had been giving the animal so many treats, it had put on weight and couldn’t fit into any of the clothes. So there it was again, that need to tell a model they’ve put on weight.

I don’t want to bite the hand that feeds me. I’m really seduced by fashion and I love the imagery. But I’m interested in humanity. And I see much more of it in that shot.

• Unfashionable: 30 Years of Fashion Photography by Rankin is published by Rizzoli (£50).

High point: “Working with Katie Grand and Jefferson Hack, although at the time we wanted to kill each other.”

Low point: “When that scene fell apart – it turned into squabbles about who was paying for what.”

Top tip: “Listen to Tristan Harris’s interview on the Waking Up podcast with Sam Harris about technology addiction.”