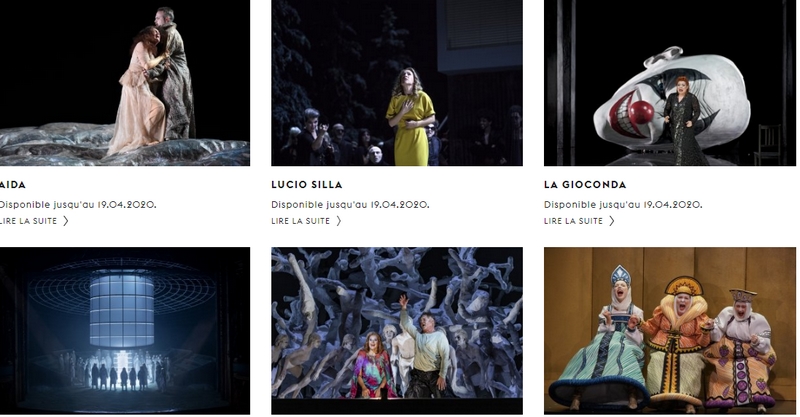 This article titled “‘Quarantine soirees’: classical music and opera to stream at home” was written by Imogen Tilden, for theguardian.com on Wednesday 25th March 2020 17.45 UTC

This page is being regularly updated [last update: Weds 25 March]. Please email us (details at end) of things we have missed, or tell us in the comments section.

Operas and concerts on demand

• Brussels’ famous opera house La Monnaie has curated a “virtual season” with seven recent productions (including Tristan und Isolde, Aida, Dusapin’s specially commissioned Macbeth Underworld and a hallucinogenic La Gioconda). Not all the surtitles are in English – try this database of librettos to gen up). You can also access the same content on its YouTube channel.

• Bavarian State Opera (Bayerische Staatsoper) are live-streaming a chamber music concert each Monday evening, then available on demand for a fortnight. The first, featuring Christian Gerhaher, the Schumann Quartet, and pianist Igor Levit was watched by almost 50,000 live and is available until 31 March. Here’s the second (highly recommended); Jonas Kaufmann is among the artists who will feature in coming concerts. Check the schedule here. The opera house has also made available a 2013 recording of Il Trovatore, starring Anja Harteros and Jonas Kaufmann (until 28 March), and Lucia Di Lammermoor with Diana Damrau and Kirill Petrenko conducting (until 8 April).

• The EU-wide Early Music Day was of course online only this year but featured live-streamed concerts that can all be watched on demand alongside plenty of previous concerts and shorter performances. Don’t miss Steven Devine’s performance of Bach’s 48 Preludes and Fugues on the harpsichord at the York Early Music Centre, or, if you need a lift, Bach’s Toccata and Fugue (other Baroque composers are available) arranged for four very nimble-fingered recorder players.

• The Gstaad Menuhin Festival and Academy (currently still scheduled to run from 17 July to 6 September 2020) have an online space where you can watch performances, backstage interviews and masterclasses from previous festivals. Registration is required (but this will also enable the non-German speakers among us to access the English-language version of the written content).

• Deutsche Oper Berlin have a regularly changing programme of past productions available on demand. Check for details

•The audio stream of Missy Mizzoli’s Breaking the Waves (which was at the Edinburgh international festival last year) captured in Opera Philadelphia’s premiere production in September 2016 is available via a Soundcloud embed.

• The Royal Opera House is making available weekly ballets or operas streamed live (and then available on demand) on their Facebook and YouTube channels. 2009’s Acis and Galatea is on 3 April, 7pm (BST) and the 2010 outing of Jonathan Miller’s Così fan tutte on 10 April. More ROH content is available on Marquee TV (see below).

• Arts and culture streaming platform Marquee TV has extended their trial period to 30 days, giving free access to a huge array of theatre and ballet productions and a large and varied collection of operas that includes most of Glyndebourne festival’s recent productions (from Brett Dean’s Hamlet to Jonathan Kent’s glorious staging of Purcell’s Fairy Queen, bonking bunnies and all). Other must-sees include Arvo Pärt’s Adam’s Passion, and Opera North’s award-winning production of Jonathan Dove’s children’s opera, Pinocchio, and one of the greatest opera events of the last decade: Aldeburgh festival’s outdoor production of Peter Grimes, staged on the beach where Britten’s opera is set. Registration (and thus credit card details) are required to activate the free trial period, but you can cancel anytime.

• The Bavarian Radio Symphony Orchestra has a wide array of past concerts on demand and will be adding to this page regularly. Of many wonderful concerts there, try Daniel Barenboim’s joyful performance of Beethoven’s 5th Piano Concerto under the baton of Mariss Jansons (from November 2017), or watch their celebrated and much missed Chief Conductor Jansons conducting Bruckner’s Mass No. 3 F minor.

• Opera North’s acclaimed semi-staged Ring cycle from 2016 is available on their website. Their 2017 production of Trouble in Tahiti is available via Now TV and Sky on-demand services, and, on operavision (more of which below) you can watch their production of Britten’s Turn of the Screw, captured live on 21 February 2020.

• Established opera streaming platform operavision.eu has a wonderful archive of productions from across Europe all available free. The site might be short of live operas to stream at the present time, but instead it has announced an increase in its archival offerings, with a mini Mozart festival running up to the end of March. You can also watch via their youtube channel.

• The Teatro Massimo in Palermo has several concerts and recent opera productions recorded live available to watch on demand. At time of writing the operas include Madame Butterfly, La Traviata, a Barber of Seville (check out the witty animated opening) and a Cav and a Pag. And there’s more to come, we are promised.

• The Teatro Regio in Turin has set up a youtube channel “Opera on the Sofa” and is making available past productions from the historic theatre. The opening offering is Nabucco, staged last February.

• Vienna State Opera has opened its archives and is offering a different opera available to watch each day, for free, via its streaming platform. Today’s offering (16 March) is Adam Fischer conducting Das Rheingold in a performance recorded in 2016; you can catch the rest of the Ring cycle later this month, plus from Falstaff to Figaro and Eötvös’s Tri Sestry (Three Sisters) – not staged in the UK since 2001 – there’s a mouthwatering array.

• New York’s Metropolitan Opera is streaming past productions from its award-winning Live in HD series of cinema transmissions while the opera house is closed. Productions will be available from 7.30pm EDT (11.30pm GMT) for 23 hours. More details on @MetOpera.

• Many UK organisations livestream concerts and make them available via YouTube or other channels. Check out the Wigmore Hall, which has a huge array of their past chamber music concerts free to watch, or try the BBC Scottish Symphony Orchestra’s YouTube channel or Melbourne Symphony Orchestra, who have continued these last few weeks to perform concerts and live-stream them.

• From Wednesday 25 March, violinist Daniel Hope is live-streaming Hope at Home – 14 half-hour episodes of live musical performance by leading classical artists, interspersed with English and German talk, live from his living room in Berlin. Tune in at 6pm CET/5pm GMT via the ARTE Concert website, where each episode will then be archived for 90 days, or on Deutsche Grammophon’s YouTube channel. And lest you be worried, no more than two artists will perform together at any one time, and they will always take care to keep at least two meters between them, while the film crew are using remote cameras.

• The London Symphony Orchestra are streaming full-length concerts on Sunday and Thursday evenings. Sunday kicks off with Francois-Xavier Roth conducting Debussy, Bruckner and Bartók, on Thursday 26 March you can watch John Eliot Gardiner and soloist Isabelle Faust in a programme that includes Schumann and Mendelssohn. Details here. Each concert will be available up to midnight on the day of broadcast, and thereafter on streaming site Stingray Classica (currently offering a free 30-day trial)

• Every evening at 630pm (GMT) there’s a live organ recital from Worcester Cathedral on Facebook Live.

• Pianist Igor Levit is broadcasting nightly “House Concerts” on Twitter. Boris Giltburg, likewise – follow him on @BorisGiltburg to find when the next one is.

•Cellist Yo-Yo Ma is playing short pieces that give him comfort and posting regularly on twitter, facebook and instragram. Search for hashtag #SongsofComfort. Fellow cellist Gautier Capuçon, on lockdown in Paris, is posting daily doses of Bach on twitter. Alisa Weilerstein has embarked on a #36daysofBach project – each day a different movement of Bach’s six Cello Suites streaming performances on twitter, instagram and facebook.

• Bass Matthew Rose and cellist Steven Isserlis are introducing each other to new music each day on twitter. Follow their dialogue and listen to their choices (here’s the first one).

• Ivan Fischer and musicians from his Budapest Festival Orchestra are livestreaming chamber concerts in a series they have called Quarantine Soirées. Check the website for details.

Please send us details (email imogen.tilden@theguardian.com, or tweet @tildeni) of what we’ve missed and we’ll aim to keep this updated. Many thanks to all who’ve sent information so far.