From the contrasting style of Lagos-based designer Lisa Folawiyo to Doreen Mashika’s traditional Tanzanian fare, Victoria & Albert Museum’s Africa Fashion exhibition is packed with inspiring patterns from across the continent. 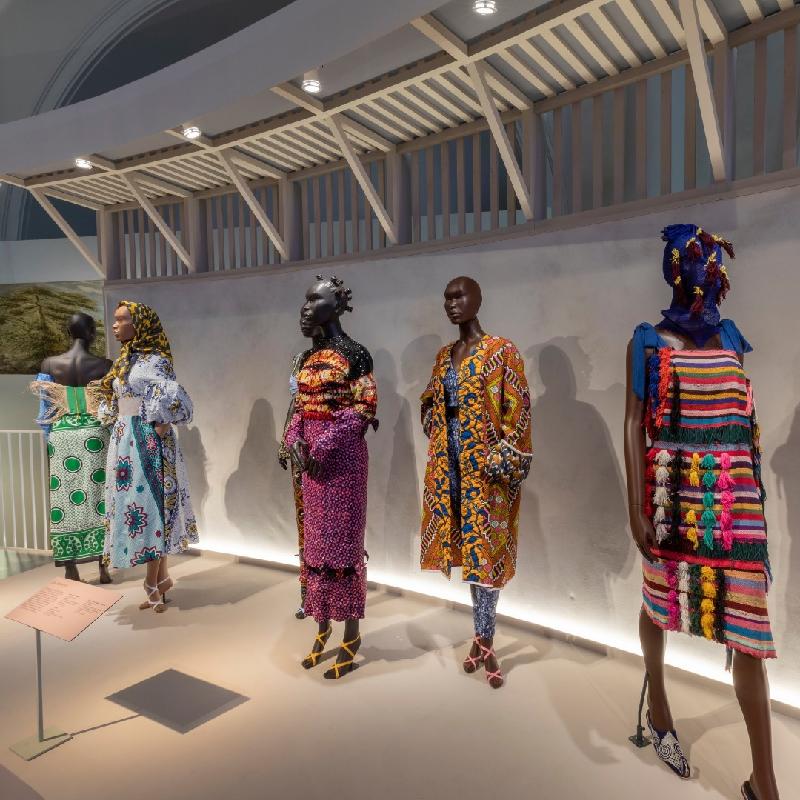 Over 250 objects are on display for the exhibition, with approximately half of these drawn from the museum’s collection, including 70 new acquisitions. Many of the garments on show are from the personal archives of a selection of iconic mid-twentieth century African designers – Shade Thomas-Fahm, Chris Seydou, Kofi Ansah and Alphadi, marking the first time their work is shown in a London museum. 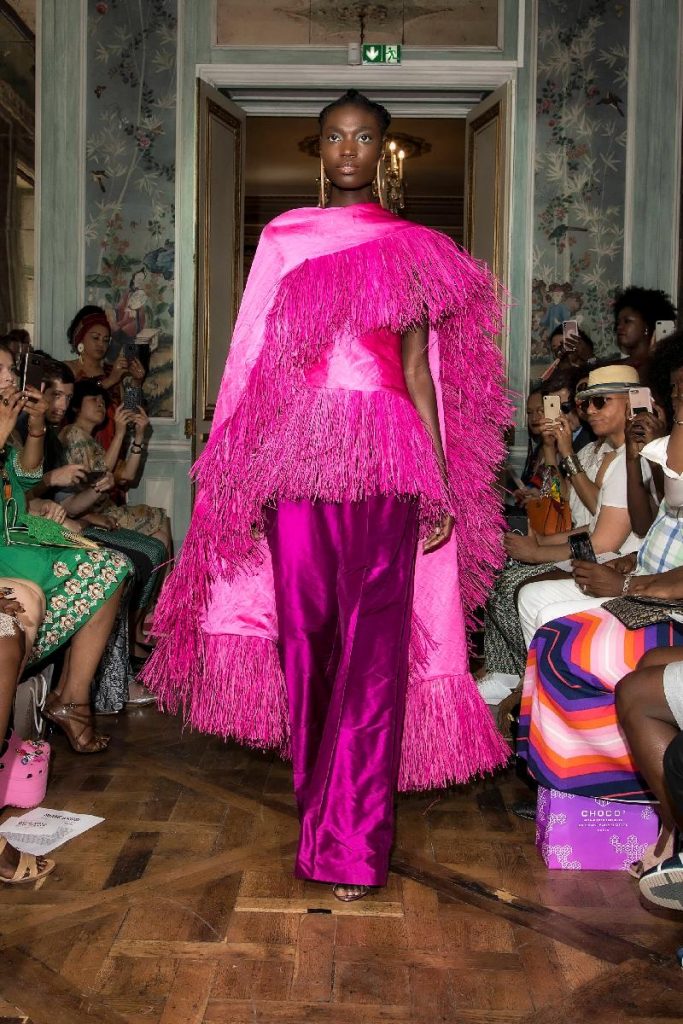 The exhibition also celebrates influential contemporary African fashion creatives including Imane Ayissi, IAMISIGO, Moshions, Thebe Magugu and Sindiso Khumalo. Africa Fashion showcases these objects and the stories behind them alongside personal insights from the designers, together with sketches, editorial spreads, photographs, film and catwalk footage.

New acquisitions highlighting fashion trends of the day from across the continent, paired with personal testimonies, textiles and photographs, are on display for the first time. Highlight objects include photography from 10 families answering the public call-out, an Alphadi dress of cotton and brass gifted to the museum by the designer and a new piece designed specifically for the exhibition by Maison ArtC.

Dr Christine Checinska, Senior Curator African and African Diaspora: Textiles and Fashion, said: Our guiding principle for Africa Fashion is the foregrounding of individual African voices and perspectives. The exhibition presents African fashions as a self-defining art form that reveals the richness and diversity of African histories and cultures. To showcase all fashions across such a vast region would be to attempt the impossible. Instead, Africa Fashion celebrates the vitality and innovation of a selection of fashion creatives, exploring the work of the vanguard in the twentieth century and the creatives at the heart of this eclectic and cosmopolitan scene today. We hope this exhibition will spark a renegotiation of the geography of fashion and become a game-changer for the field.

Starting with the African independence and the liberation years that sparked a radical political and social reordering across the continent, the exhibition looks to explore how fashion, alongside music and the visual arts, formed a key part of Africa’s cultural renaissance, laying the foundation for today’s fashion revolution. Across contemporary couture, ready-to-wear, made-to-order and adornment, the exhibition also seeks to offer a close-up look at the new generation of ground-breaking designers, collectives, stylists and fashion photographers working in Africa today. It explores how the digital world accelerated the expansion of the industry, irreversibly transforming global fashions as we know them. From global fashion weeks to celebrity wearers and the role of social media, Africa Fashion celebrates and champion the diversity and ingenuity of the continent’s fashion scene.

The exhibition forms part of a broader and ongoing V&A commitment to grow the museum’s permanent collection of work by African and African Diaspora designers, working collaboratively to tell new layered stories about the richness and diversity of African creativity, cultures, and histories, using fashion as a catalyst. 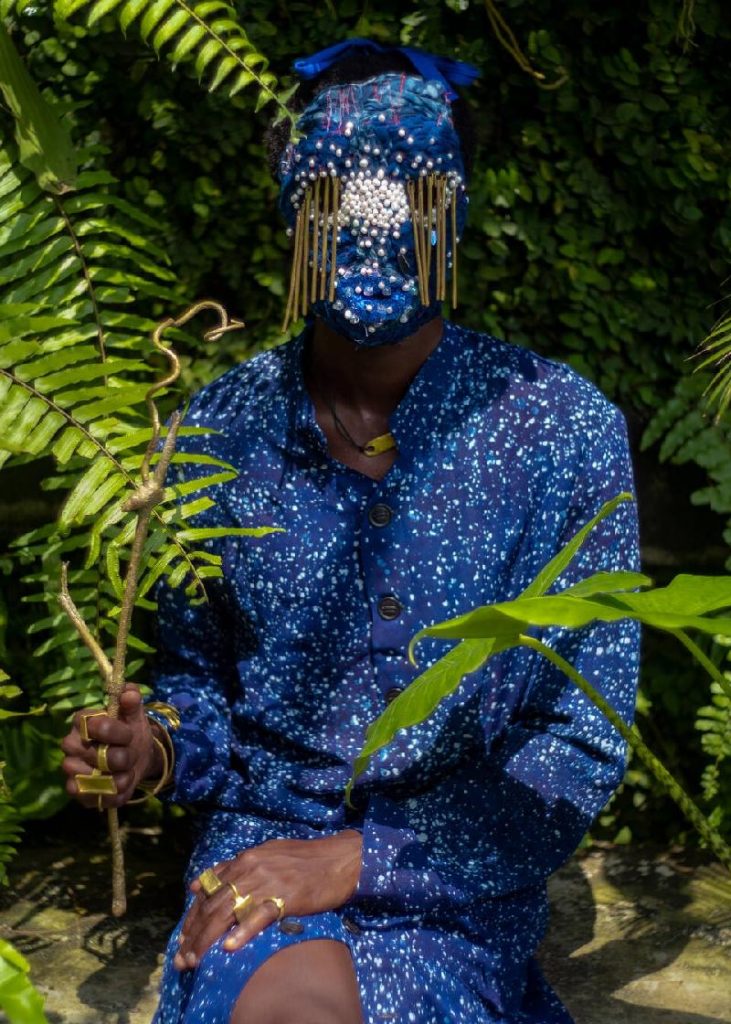 “It’s not just designers, there’s a whole ecosystem of models, make-up artists, photographers, illustrators – imagine bringing everybody’s work to life season in season out. Fashion that’s created by our people for our people and for the benefit of growing and developing our economy. This exhibition is important because for the very first time fashion from the continent will be viewed from a diverse perspective which spans centuries” – Omoyemi Akerele, Founder and Director, Lagos Fashion Week and Style House Files.

“I feel like there’s so many facets of what we’ve been through as a continent, that people don’t actually understand. Now more than ever African designers are taking charge of their own narrative and telling people authentic stories, not the imagined utopias.” – Thebe Magugu, Womenswear Designer.

The exhibition begins with a contemporary ensemble that combines shimmering silk with exuberant layers of raffia by Imane Ayissi. Born in Cameroon, the couturier sits at the crossroads between fashion systems, bridging historical and contemporary periods, continental and Global Africa, artisanal craft making and haute couture. This ensemble introduces the idea that African fashions are beyond definition and that creatives can and do choose their own paths.

The ground floor of the exhibition continues with an African Cultural Renaissance section that focuses on the African liberation years from the mid-late 1950s to 1994. Politics and Poetics of Cloth considers the importance of cloth in many African countries and the way in which the making and wearing of indigenous cloths in the moment of independence became a strategic political act. Wax prints, commemorative cloth, àdìrẹ kente and bògòlanfini are shown – fragments of a rich textile history that includes thousands of techniques from across the continent. Highlight objects include a strip of printed seersucker cotton from the V&A collection featuring the image of an open palm and the words ‘freedom in my hand I bring’ incorporating the newly independent Ghana insignia – a visible expression of community concerns as well as national, and individual identities. 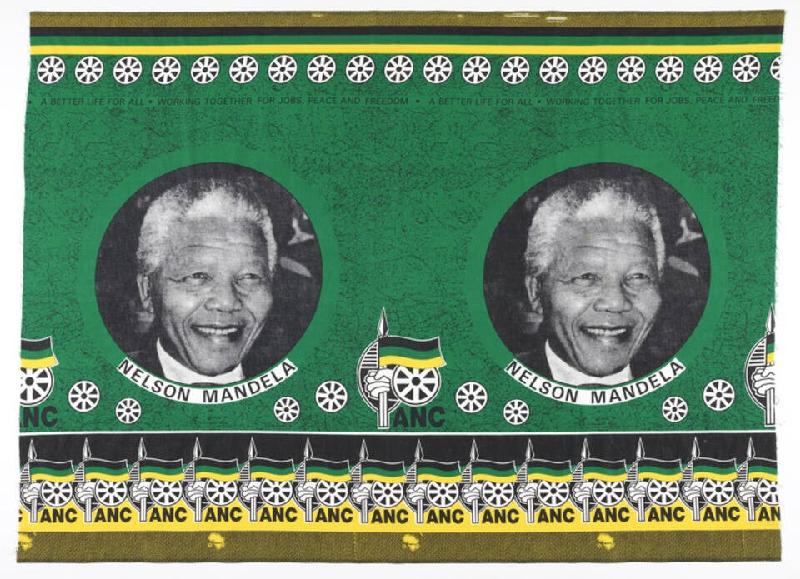 Also on display is a commemorative cloth made in the early 1990s following the release of Nelson Mandela, featuring a portrait of the soon to be first Black President of South Africa and the words ‘A BETTER LIFE FOR ALL – WORKING TOGETHER FOR JOBS, PEACE AND FREEDOM’.

Shade Thomas-Fahm (b.1933), Chris Seydou (1949 – 1994), Kofi Ansah (1951-2014), Alphadi (b.1957), Naïma Bennis (1940–2008) and their peers represent the first generation of African designers to gain attention throughout the continent and globally. Marking the first moment in which their work is shown in a London museum, the next section, The Vanguard, traces their rise and impact, their creative process, and inspirations, brought to life by real stories from those who loved and wore their distinctive designs.

Highlights include a re-imaging of the traditional Nigerian ìró by Shade Thomas-Fahm – known as ‘Nigeria’s first fashion designer’. Alongside are a dress of silk and lurex from 1983 by Chris Seydou, known for promoting indigenous African textiles like bògòlanfini on the global stage. Ghanaian fashion designer Kofi Ansah’s iconic fusion of African and European aesthetics are represented in a blue robe with traces of the Japanese kimono, the European judge’s robe and the West African agbádá robe. The innovation of Alphadi, described as the ‘Magician of the Desert’ is shown with a dress of cotton and brass from 1988, gifted to the museum by the designer. 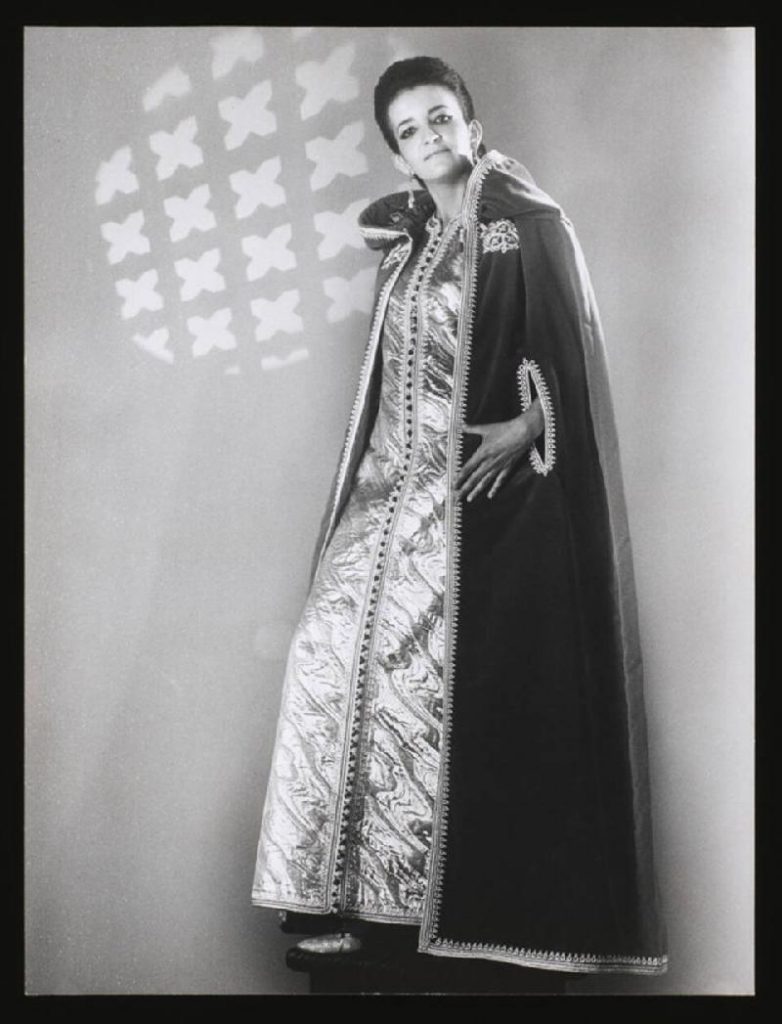 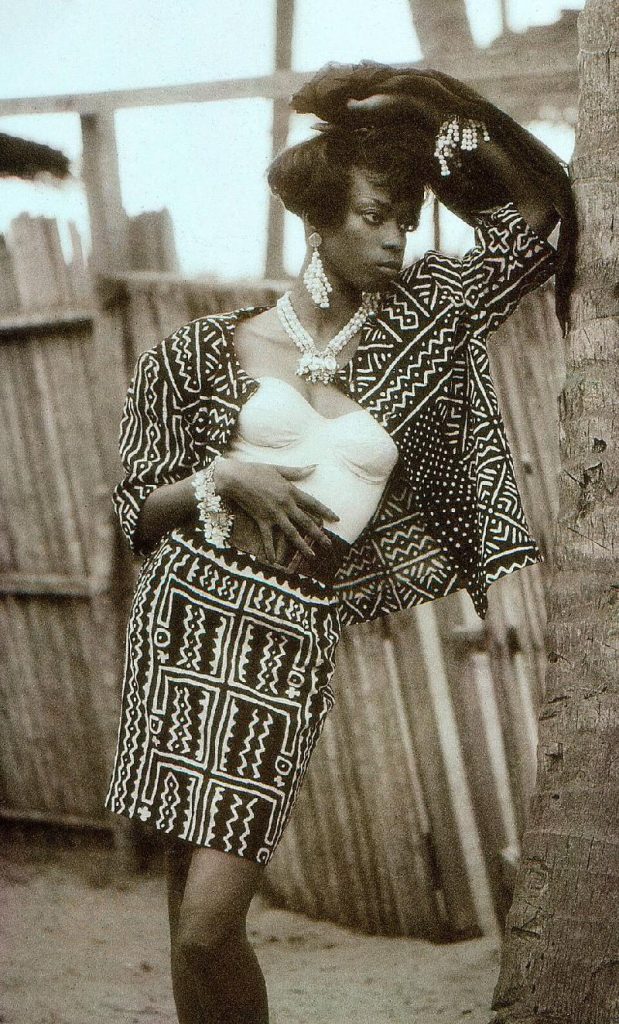 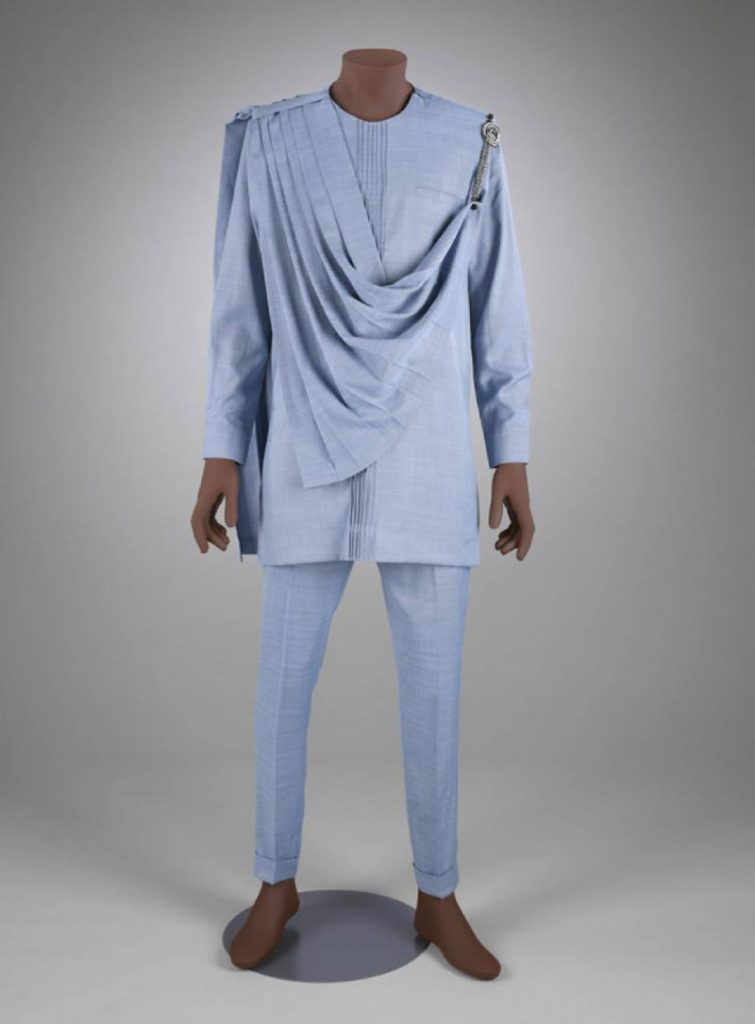 On the mezzanine level of the exhibition, the new generation of ground-breaking designers, collectives, stylists and fashion photographers working in Africa today is celebrated. A new piece designed specifically for the exhibition, ‘A Dialogue Between Cultures’, by Maison ArtC introduces this floor.

A first section on Minimalism features a look by Rwandan fashion house Moshions, known for re-imagining traditional Rwandan forms and cultural motifs into contemporary pieces. Paying tribute to the ceremonial attire worn historically by Rwandan royalty, the menswear look on show references the traditional Umwitero, a sash draped over the shoulder as well as beadwork and embroidery taking inspiration from Imigongo aesthetics. 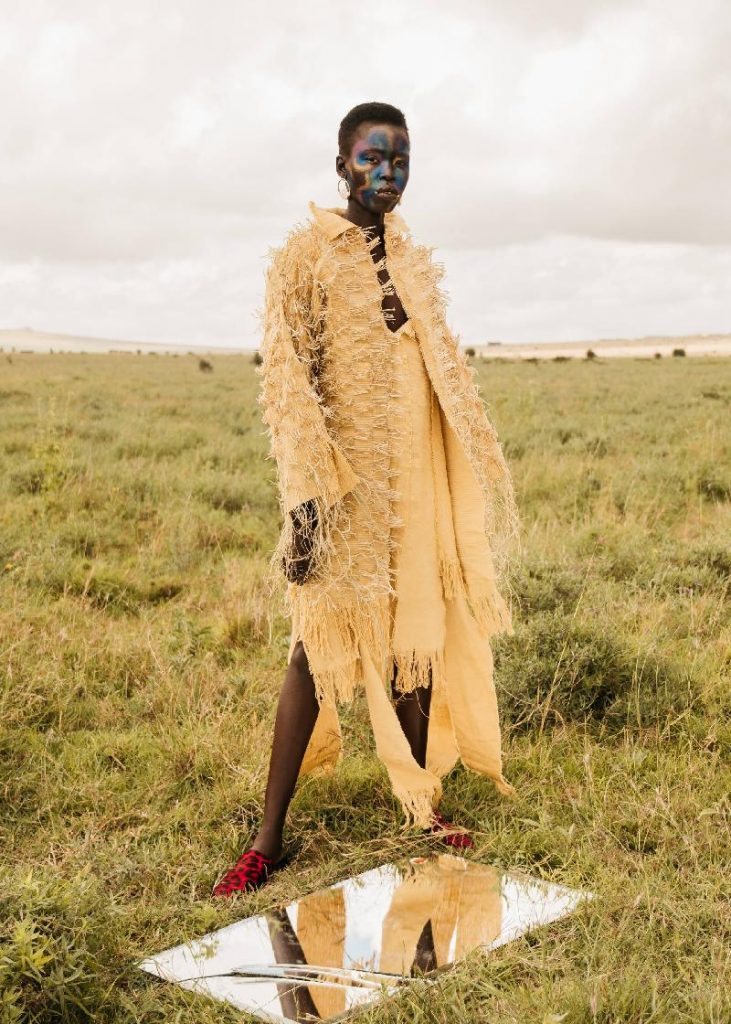 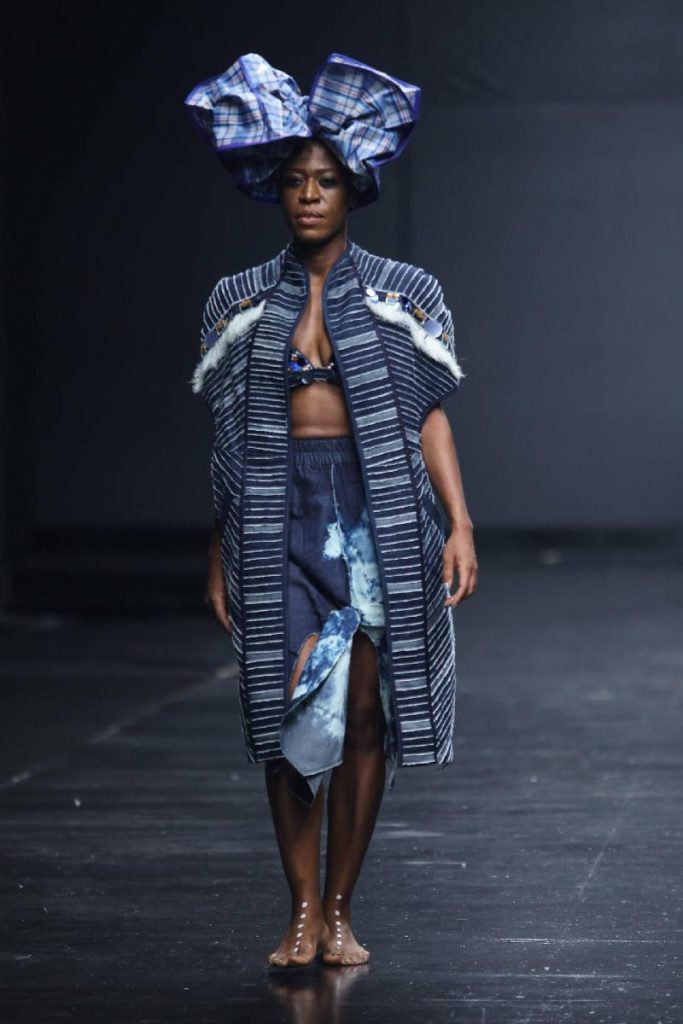 Artisanal showcases a blue and white ensemble of DAKALA CLOTH by NKWO, who work with small-scale artisan makers across the African continent that specialise in hand crafts such as hand dyeing, weaving, beading and embroidery. NKWO explores ways of using waste materials in her designs while still preserving traditional textile craft skills. DAKALA CLOTH, made from waste fabric is stripped and then sewn back together with a technique that gives the appearance of traditional woven cloth.

Afrotopia features a look from Thebe Magugu’s Alchemy Collection that centres on African spirituality and the relationship we have with our ancestors. The designer collaborated with Noentla Khumalo, a stylist and traditional healer, on the collection. Alongside is a look by Selly Raby Kane, which takes inspiration from Afro-Futurism. 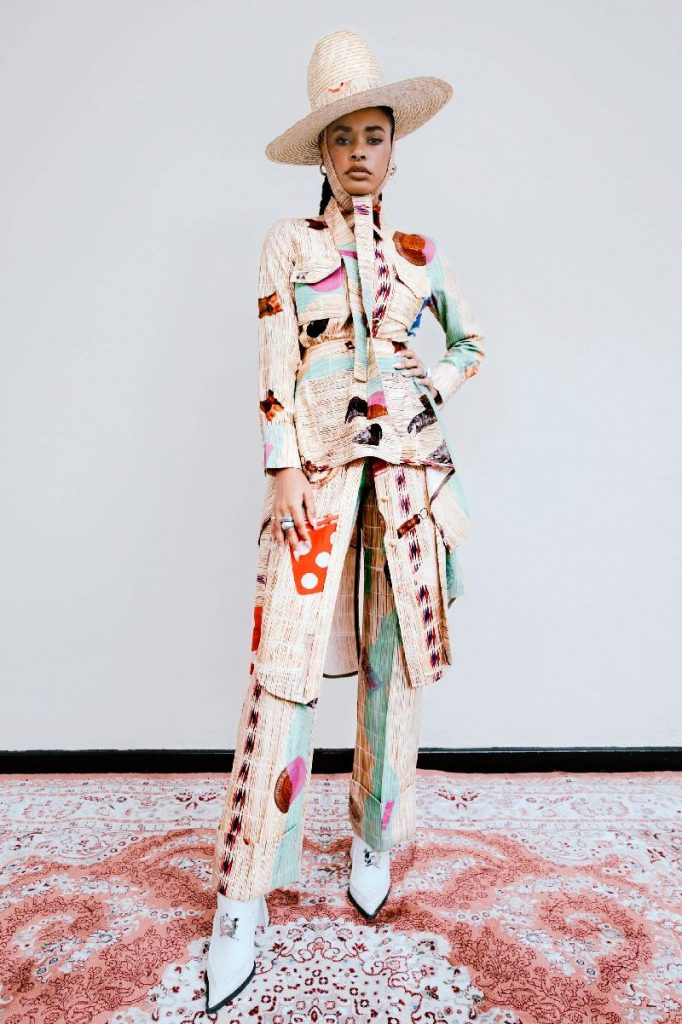 In Adornment a neckpiece made of brass, sisal and borax salt from Ami Doshi Shah’s ‘Salt of the Earth’ collection examines the talismanic properties of jewellery and the storytelling ability of materials drawn from nature. 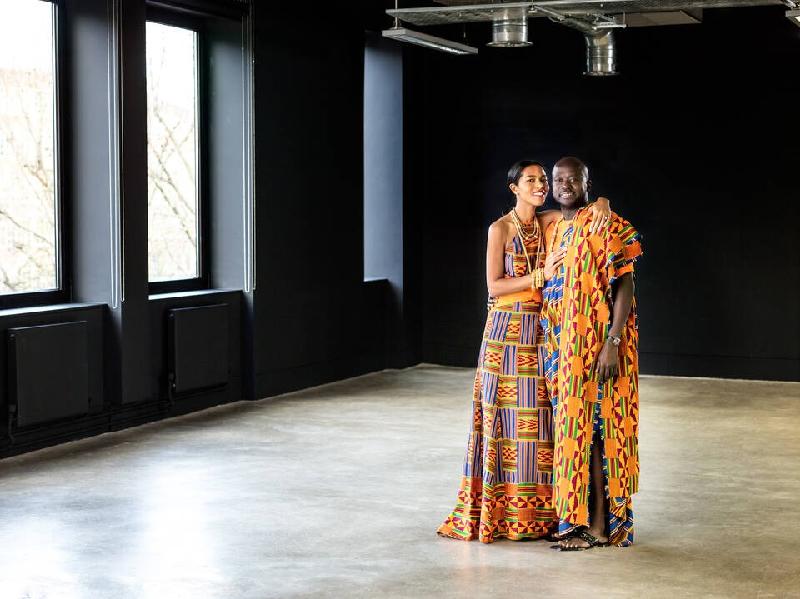 Designed by Kofi Ansah, ensembles for the wedding of Ashley Shaw-Scott Adjaye and David Adjaye. Ghana, 2014. © Photographed in London in 2014 by Robert Fairer

Co-Creation spotlights personalised, contemporary twists on tradition with commissioned bespoke outfits made for the wedding of Lady Ashely Shaw-Scott Adjaye and Sir David Adjaye OBE by Kofi Ansah. Over the course of four appointments at his atelier in Accra, Ansah and the couple discussed every aspect of the designs, made from Ashanti Bonwire kente cloth from the designer’s extensive collection. The couple were later photographed for British Vogue magazine wearing their Kofi Ansah designs.