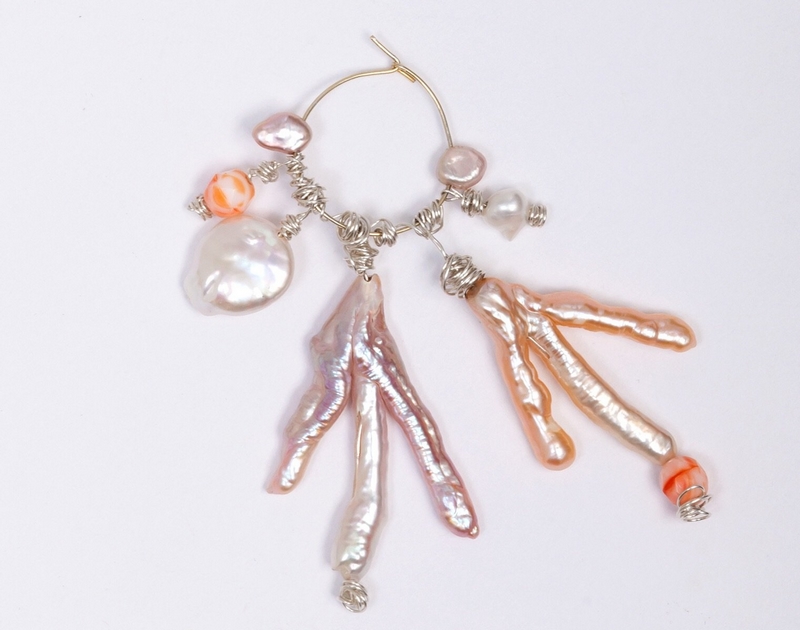 Area NYC: the buzzy brand blowing up this season

Generally, when fashion editors are prepared to get wet to watch a show, buzz status is bestowed. This happened on the rainy roof of Seward Park high school on the Lower East Side last September, with New York-based Area, a brand on the radar of style magazines since it was founded in 2016. This collection saw it continue on a journey through pop culture. Set to the sensual melodies of Estonian soul artist Velly Joonas, remixed by the Late Night Tales collective, designers Piotrek Panszczyk and Beckett Fogg captivated the audience with a collection that felt fresh yet grounded, powerful yet playful. Inspired by little-known Czech artist Libuše Niklová, the pioneer of inflatable children’s toys in the 60s, it was sculptural, sexy and textured. “[Her] bold, graphics and colourful blown-up shapes started our journey in playing with volume and we began cutting our patterns to mimic inflation,” Panszczyk says, hence the “inflated folklore dolls reimagined in sheer organza with regal embellishments that evoke early 60s couture”. The beaded lattice overlays and boots with swinging beads – inspired by both Polish folk costumes and the mass-market trinket trade in China – created what the designers like to call “a modern clash of embellishment”. One worth waiting in the rain for. SC

Mary Quant may as well have been talking about the 2010s when she said, “Fashion, as we knew it, is over. People wear now exactly what they feel like wearing.” It makes sense, then, that London’s V&A is paying tribute to a designer who feels as relevant now as she did in 1966. From 6 April, the museum will host the first international retrospective of the 85-year-old’s work, exploring her career from its experimental beginnings to the designs that made her an icon. With her trademark bob and miniskirt, Quant famously became the figurehead of the youthquake in London, targeting young women with clothes their mothers would have raised an eyebrow at. But that is only entry level. “The exhibition is long overdue,” says co-curator Jenny Lister. “Everyone thinks of the 60s and miniskirts, but there’s so much more to the story. Almost every designer is influenced by the strength of her brand and how she marketed herself.”

Her ability to connect with the public is also enviable: 35 garments were donated by an army of Quant fans who answered a V&A call-out. This exhibition will only add to that fanbase – and probably increase your desire to wear a miniskirt. LH

Charlotte Knowles: this is what feminist fashion looks like

The Charlotte Knowles brand pulls few punches when it comes to what it’s about: “The future of femininity, what it embodies now, and the loss of intimacy thanks to social media.” Knowles, 26, and her partner Alexandre Arsenault, 29, launched the label after graduating from Central Saint Martins in 2017.

For SS19, they built on their feminine yet deconstructed aesthetic, using Knowles’ family holidays to Salcombe as inspiration. The result – corsets crossed with bikini tops, dresses and trousers with extreme cutouts and mesh layering – is “quite menswear in a very womenswear sense”, athletic yet sensual. Drawstrings, semi-sheer fabrics and tortoise graphic patterning were included. “There are English heritage references, classic prints and checks,” says Knowles, whose nods to the English seaside are “a little bit tongue-in-cheek”. The brand may be in its infancy but it counts Charli XCX and Princess Nokia among its fans. Expect more wearable, and doubtless provocative, looks in their third outing on the Fashion East catwalk for AW19. LH

The artwork on the moodboard of jewellery designers in 2019? Johannes Vermeer’s 1665 Girl With A Pearl Earring. Pearls are everywhere at the moment and it’s thanks in large part to Wald Berlin. Its sweet-water-pearl-in-a-shell necklace became an Insta hit last year, when it was worn by the most influential of influencers. It was a precursor to this season’s penchant for all things beachcombed. “We love how you feel by the sea and how it’s associated with freedom and being nomadic,” says designer Dana Roski, who founded the brand in 2018 with Joyce Binneboese. “It is a very strong childhood memory for both of us – playing and running around collecting shells – and we both have a strong connection to nature and the materials nature gives us.”

Their SS19 collection, The Bonita – handmade, like their others, by mothers and grandmothers, including their own – incorporates dramatic drop shell earrings, as well as bracelets with colourful childlike beads reminiscent of a seaside souvenir. It’s set to be another sellout success at new stockists Net-a-Porter, Harvey Nichols and the Modist, among others. “We wanted to take some elements of our first collection but give them a more contemporary feel,” Roski says. SC

Artica Arbox: the unisex brand that wants us all to be heroes

Paria Farzaneh’s parents moved to the UK from Iran more than 30 years ago, and while her roots certainly influence her label, the 24-year-old designer says, “the story shouldn’t ever be pigeonholed as the same thing every time”. She describes her current – second – collection as sitting somewhere between her heritage and the present. This means elegantly tailored khaki streetwear liberally covered in a Ghalamkar, a traditional hand-printed fabric seen in every Iranian’s home, “from a bedspread to a tablecloth”. The prints come from a city in Iran called Isfahan, and each pattern is carved by hand from a woodblock.

Despite being a woman working exclusively in menswear, Farzaneh thinks designing for gender is a moot point, and “talking about gender in 2019 is completely irrelevant”. On the radar of the likes of Hypebeast, Dazed & Confused and the LN-CC store, her focus, too, is in flux: “Streetwear is definitely a trend [but] it’s not something with a long shelf life,” she says. “Fashion has become very lazy… we need to smarten up.” Time to dust off the iron. MF

Parley for the Oceans: the organisation making ocean plastic into fashion

“Purpose is the new luxury,” Parley for the Oceans founder Cyrill Gutsch declared at December’s Fashion Awards as he lifted the gong for innovation. The creator of recycled Ocean Plastic – used in tote bags designed by artist and long-time collaborator Julian Schnabel and by Stella McCartney for Adidas – says that the industry “has the power to create change fast”. With various clean-up projects in the works, he believes, “This is the start of a material revolution.” SC

Ahluwalia Studio: the brand asking us to reuse, relove and rewear

Having a clear-out? Think of Ahluwalia Studio. Seeking a sustainable solution to throwaway fashion, designer Priya Ahluwalia “repurposed things that could be thrown away” for SS19. Her pieces use traditional methods that honour her Indian-Nigerian heritage. “We know so much about fashion’s impact on the planet, it’s impossible to ignore,” she says. SC