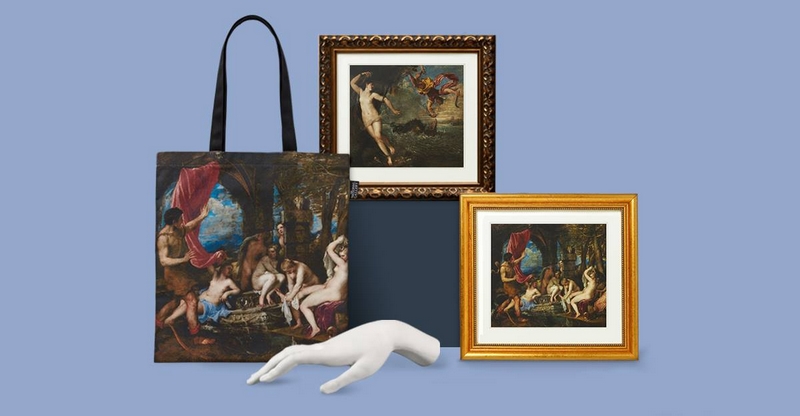 You might not be able to visit UK’s National Gallery’s ‘Titian: Love, Desire, Death’ exhibition, but you can still head to the online shop to discover the dedicated range including ornaments, prints, glassware lines and much more. @national gallery

This article titled “We must use arts funding to rewild our cultural landscape after coronavirus” was written by Suzanne Moore, for theguardian.com on Wednesday 6th May 2020 15.07 UTC

No one has died from not going to an art gallery. Or from missing a night at the theatre, or not seeing a great band. So when people are actually dying it may seem a little churlish to complain that culture feels a little dead.

Yet it is flat. The arts establishment seems to me as lumbering, London-centric and out of touch as ever. Just as they had nothing to say about Brexit – beyond that it was a very bad thing – what are they telling us about Covid-19?

There are various pushes to make sure that, post-pandemic, the big institutions, from the Tate to the V&A, get back to normal. But I don’t want things to get back to normal if that just means rich art collectors jetting round the world to buy paintings as interior design. Is normal when Hollywood figures out how to make crappily scripted films again by checking the temperatures of its actors? Does normal mean stadium tours by big bands with ticket prices in three figures?

Already, it is clear that successful artists and institutions are not the ones we need to prioritize. Rather, it is the upcoming generation of culture-makers. We already know what happens when we don’t make it viable for people from every background to enter the arts: art schools have become finishing schools, often for well-heeled international students. The TV industry and theatre are dominated by the connected and wealthy. If social mobility has stalled generally in society, in the arts it has actually gone backwards. A working-class artist is still something to be.

This is hardly new, but post-Covid-19 it is our chance to revitalise this monstrously monotone class landscape. Otherwise, we could be left simply with a wasteland.

We can take lessons from the past. A lot of now-famous artists, from Tracey Emin to Jarvis Cocker, talk of the dole and small enterprise allowance that allowed them to become what they are. In 2009, following the financial crash, some of us were involved in an effort to kickstart our young creatives. Martin Bright had written an inspirational article in the New Statesman citing Franklin D Roosevelt’s New Deal programmes following the Great Depression, when parks, buildings and libraries were built. Roosevelt’s Works Progress Administration created 3,500 libraries and put on 4,400 music performances every month. Jackson Pollock, Willem de Kooning, Mark Rothko, Saul Bellow and John Cheever were some of the beneficiaries of his Public Works of Art scheme.

What Bright suggested was a New Deal of the Mind to equip creatives. With the help of Maggie Darling (wife of Alistair), we had a meeting at Downing Street with many key cultural figures of the time. The mistake, I think, was that this was presumed by some to be another begging bowl for arts funding. It was the opposite. We were arguing that a key way out of recession was through cultural projects.

In terms of recovery, this should be a no-brainer. Before the crisis struck in February this year, our creative industries contributed almost £13m to the UK economy every hour. That sector was growing five times faster than the national economy. This is playing to our strengths. We are good at it! As a country, this is our strength, and there are jobs to be created. We were talking about hooking up engineers with arts grads, designers with scientists, tech kids with care homes. Innovation happens in this cross-fertilisation and, post-Covid-19, this is where we need to be.

What we also didn’t realise perhaps in 2009 was how fast the digital world was moving and how the gig economy was becoming normalised. Artists need a safety net in this freelance, self-employed world. They also need space no longer possible in city centres. Back then, we asked for commercial empty spaces to be used. Post-Covid, the high street will surely be full of such spaces?

Other countries can help show us paths forward. Germany has a federal aid package of €50bn (£43.6bn), and is distributing it in small chunks – €5,000 to freelancers in places like Berlin. Small lump sums to individuals, rather than massive grants to institutions. Initiatives should be local. Textile workshops in Italy are teaching people how to make masks.

A thriving culture is not about the next artist to be exhibited at Frieze or the next McQueen. Nor is it about fame or glory. It’s about creating the conditions in which an ecosystem of artistic collaboration may grow. As we hit a global recession, I would argue that culture, far from being a luxury, becomes a necessity. How do we make that culture sustainable? We invest. As Eleanor Roosevelt said: “The future belongs to those who believe in the beauty of their dreams.”

Now is not the time to lockdown the dreams of our creative young people. Instead, we should make sure they can unlock them.