Motor Mouths, created by the photographer and digital artist Richard Jones, offers an insight into Britain’s automotive landscape. Working in partnership with the British Motor Museum and Arts Council England, the audiovisual project includes a 17-minute digital installation of ‘talking portraits’ and timelapse clips featuring workers at the Vauxhall, Bentley and Morgan plants. 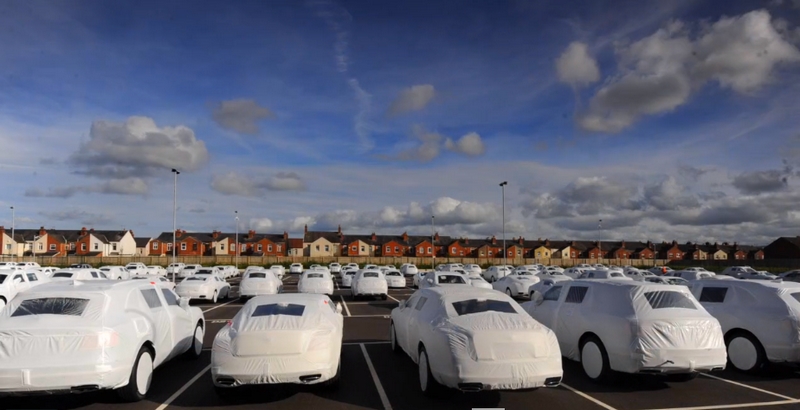 This article titled “Motor Mouths: an audiovisual guide to the UK car industry – in pictures” was written by Richard Jones, for theguardian.com on Thursday 3rd May 2018 11.00 UTC

Motor Mouths tells the story of the automotive landscape in the UK, from highly automated car manufacturing plants to heritage, hand-built vehicles. Produced by the photographer Richard Jones, the audiovisual project – which took more than two years to plan and 14 months to create – centres on the work of Bentley, Morgan and Vauxhall.

The result is an installation that glides from automated high-volume car manufacturing to Morgan’s hand-built wooden-framed cars, before pausing to consider the impact of factory closure at Longbridge, once the UK’s largest car plant.

Vauxhall operates a highly automated plant where approximately 1,200 employees work alongside 900 robots. While staff numbers have decreased, the capacity of Astra production has increased.

The plant can produce 37.5 vehicles per hour, or 680 per day. Once the steel is pressed, a car takes about six hours to construct. Last year Vauxhall produced 92,020 vehicles. A new model costs at least £17,000.

We are all robots; we are all creatures of habit.

Dave Owens, a robot operator and mechanic in the body shop at Vauxhall’s Ellesmere Port plant, says: “We are all robots; we are all creatures of habit. I do what the robots do: I park in the same place, come through the door at the same time, change into the same gear every day … I follow a pattern. The only thing is, we have to teach the robots the pattern to take.’

Bentley Motors in Crewe, which employs 4,000 people, is a highly modern plant that mixes state-of-the-art technology with craftsmanship. The company’s German owners have invested heavily in the Cheshire-based plant. Bentley cars feature Italian leather made from Highland cows that graze in alpine meadows and plush walnut wood interiors.

In 2017, Bentley Motors the Crewe plant produced a record 11,023 cars. The Bentayga model (pictured) costs from £165,000 and takes about 40 hours to build. The Mulsanne, which has an extended wheel base, is a sedan and costs at least £275,000. Customers can travel to the factory and visit its showrooms where they can see their car being built. After, they are offered a tour of the factory and chauffeured around the complex in Bentleys.

Even these robots can’t do what we can do

Phil Ward, who works in the wood shop, says: “Bentley is bringing the new robots and that sort of stuff – but even these robots can’t do what we can do. The cars still have to be made by hand on the bench by us.”

The family-owned Morgan plant is nestled in the Malvern Hills, Gloucestershire. The factory opened in 1909 and has stayed true to its mission to construct high-quality, handmade racing-style cars. The plant produces 850 cars each year, all built to order, and employs 205 people.

Morgan cars cost about £60,000 each and the company says its order books are full. The carmaker has recently released an electric version of the classic three-wheel car, and the average Morgan, which still has a wooden frame made by local carpenters, takes about four weeks to build. Despite the brand’s traditional image, its owners say they keep up with the latest technology.

At the Morgan factory, the men are the machines

The Motor Mouths installations are made entirely from individual photographs, with more than 200,000 images captured for the project. Portraits have been cut into several layers to give the impression of 3D, known as the parallax effect. Timelapse clips, each one composed of thousands of images, are weaved among the portraits.

Kineton, a local high school, and the Factory Young People’s Centre in Birmingham helped film sections of the project in a series of workshops. The acclaimed musician and soundscape artist Phil Reeve created a piano-based soundtrack to accompany the Motor Mouths that combined factory sounds and interviews.