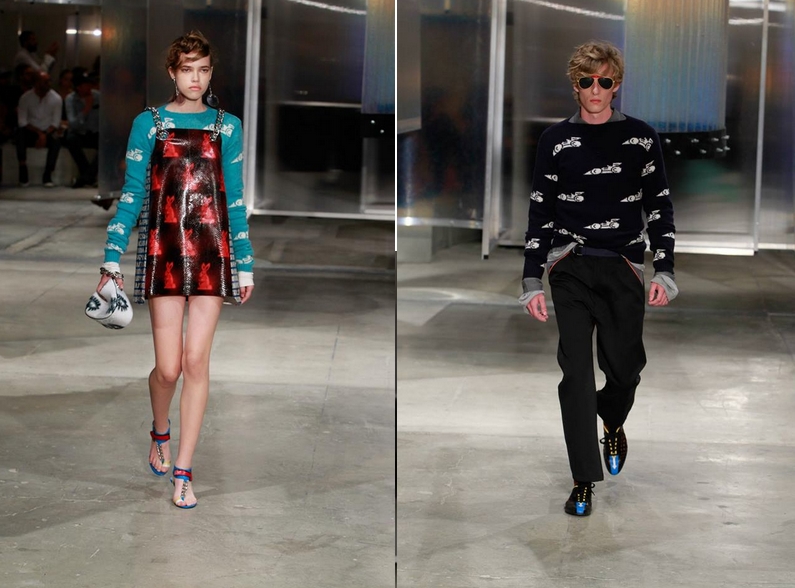 There was a sense of threat in the air, quite literally, at Prada’s fashion show in Milan, as huge slabs of clear plastic swayed gently above the guests’ heads.

Some pieces were curved, like tubes that might suck you up into an alien spacecraft. Others were as straight as a blade and seemed likely to chop you in half.

As Italian fashion’s preeminent intellectual, Miuccia Prada’s shows can be tricky to decode – although, given her impeccable reputation for predicting trends, everyone tries.

Last season’s menswear show was particularly unconventional, as she turned the slot into a presentation for both genders. This season, again, was officially a “men and women show”, although the male models dominated at first on Sunday.

The male models’ palette was relatively subdued: grey and navy blazers, red turtle necks as layers, soft, billowing mustard shirts. Short but roomy navy shorts with visible white stitching looked like oversized school uniforms. Then graphic symbols appeared on jumpers and jackets: rabbits, eyes, racing cars, rockets, crosses and arrows. But it was the entrance of the women that really dazzled, with palette sequins, shift dresses in plasticky fabrics and knee-length kilts comprising a mashup of panels in contrasting fabrics.

Backstage, wearing a heavy silk tobacco-coloured overcoat and a skirt from the show covered in oversized rivets, Prada cautioned against taking overt meaning from the rabbits and rockets. “They represent any kind of symbolism – advertising, logos – although I don’t like to simplify thoughts, so we chose stupid symbols, the most infantile, that worked graphically,” she said.

This was a collection with three titles, she added – “post-modest, post-industrialist and post-pop” – then spoke of the difficulty of retaining modesty and humanity when it is neccessary to be so “bold, aggressive and loud” in the modern world.

In March, Prada reported a 28.2% slump in net profits in the 12 months to 31 January. As with fellow megabrands Louis Vuitton and Gucci, Prada’s falling sales have been linked to a changing political landscape in China and an increasing desire, among luxury consumers, to buy understated, less obviously branded, goods.

Growth in men’s fashion has been outperforming women’s, however, and last year Prada announced plans to focus on menswear.

It was interesting, then, that this collection did not play obviously to the home crowd of men’s journalists and buyers. While current and former Prada menswear campaign stars Jack O’Connell and Michael Shannon were in the front row, on the catwalk the women’s clothes were by far the brightest and most shiny.

But perhaps Prada does not believe its admirers to be easily distracted by shiny, bright things. After all, Prada is a brand that thrives on being contrary and surprising, on the concept of “ugly beauty”, on thoughtful dressers and challenging clothes.

That impression has been cemented by the company’s latest project – a vast new headquarters for its art-collecting arm Fondazione Prada, designed by architect Rem Koolhaas in an industrial area of Milan – where tonight Prada’s fans will toast the collection amid work by Jeff Koons and Damien Hirst.