Driverless cars technology is inspiring a new era of marine exploration. A global consortium of partners, led by marine research organization ProMare are building an unmanned, fully-autonomous ship that will cross the Atlantic on the fourth centenary of the original Mayflower voyage in September 2020. 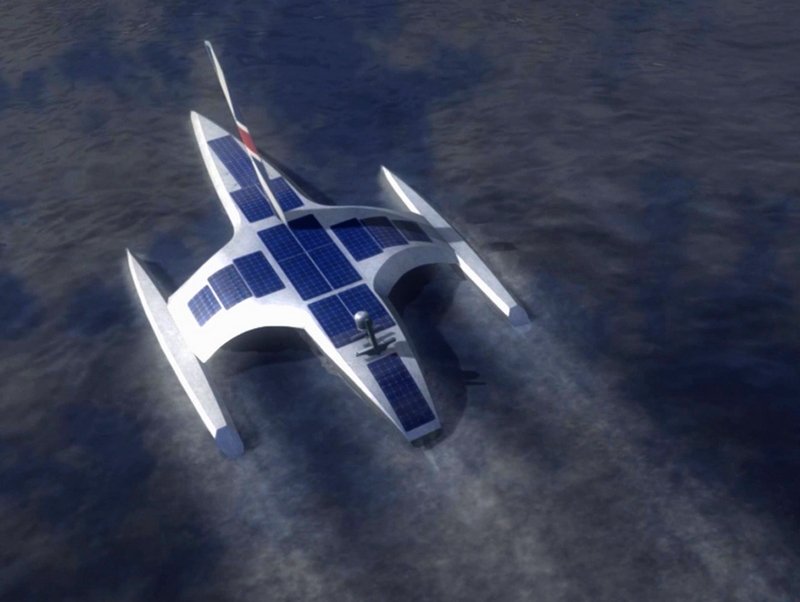 The Mayflower Autonomous Ship (MAS) will use IBM’s AI, most powerful servers, cloud and edge computing technologies to navigate autonomously and avoid ocean hazards as it makes its way from Plymouth, England to Plymouth, Massachusetts. If successful, it will be one of the first self-navigating, full-sized vessels to cross the Atlantic Ocean and will open the door on a new era of autonomous research ships.

“Putting a research ship to sea can cost tens of thousands of dollars or pounds a day and is limited by how much time people can spend onboard – a prohibitive factor for many of today’s marine scientific missions,” said Brett Phaneuf, a Founding Board Member of ProMare and Co-Director of the Mayflower Autonomous Ship project (together with fellow Board Member Fredrik Soreide). “With this project, we are pioneering a cost-effective and flexible platform for gathering data that will help safeguard the health of the ocean and the industries it supports.”

Andy Stanford-Clark, Chief Technology Officer, IBM UK & Ireland, added: “IBM helped put man on the moon and is excited by the challenge of using advanced technologies to cross and research our deepest oceans. By providing the brains for the Mayflower Autonomous Ship, we are pushing the boundaries of science and autonomous technologies to address critical environmental issues.”

The vessel will carry three research pods containing an array of sensors and scientific instrumentation that scientists will use to advance understanding in a number of vital areas such as maritime cybersecurity, marine mammal monitoring, sea level mapping and ocean plastics. The work will be coordinated by the University of Plymouth, UK, who are at the forefront of marine and maritime research, with support from IBM and ProMare. 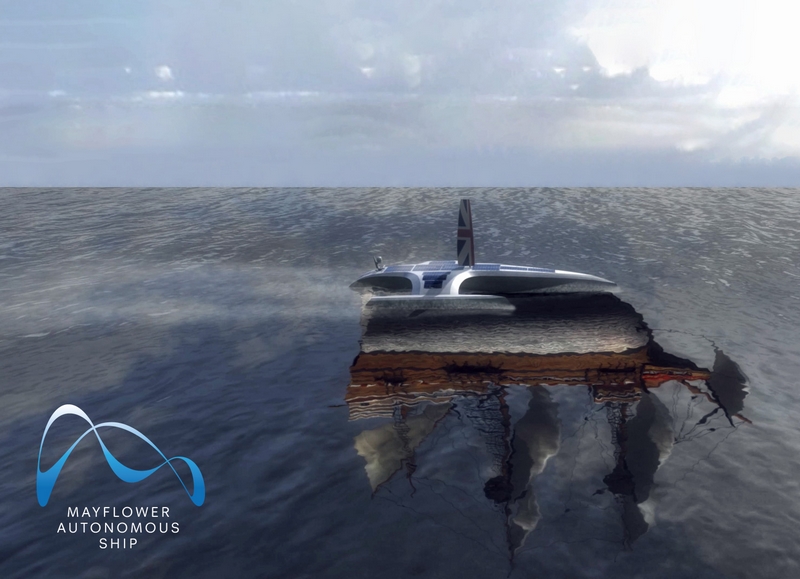 Mayflower Autonomous Ship at sea with a reflection of the original Mayflower, an inspiration for the project; Credits: University of Birmingham’s Human Interface Technologies Team (HIT)

Ocean Plastics: Microplastics present a substantial challenge to our oceans

According to a study conducted by One Poll on behalf of IBM in the UK, more Brits are concerned about plastics in the ocean than any other form of plastic pollution, and 80% are worried about microplastics ending up in the food we eat. The University of Plymouth – a global authority in microplastics – will lead research to advance understanding in this critical area, analyzing water samples from MAS as it sails across the Atlantic to understand more about the origin, distribution and potential impact of microplastics in the ocean.

Over 700 species come into contact with marine litter which is found from the poles to the equator, and estimates are that the quantity of plastic in the oceans will triple in the decade to 2025. The Mayflower Autonomous Ship gives us the opportunity to rethink how to collect data and further our understanding of this global issue.”

Also coming on board is the UK’s University of Birmingham which will be responsible for the use of virtual, augmented and mixed reality technologies in the MAS mission. Birmingham’s Human Interface Technologies (HIT) Team is leading the development of a Mixed Reality Telepresence Science Station which will allow school children and members of the public around the world to experience the transatlantic mission. 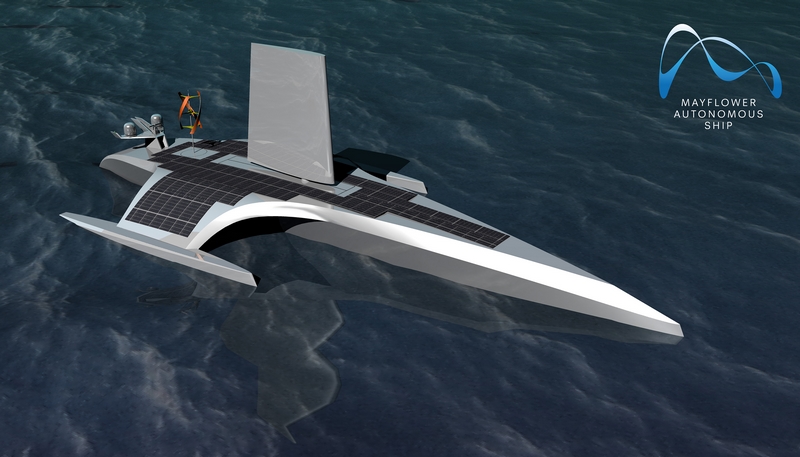 CGI Visualisation of the Mayflower Autonomous Ship at sea, with the wingsail and the solar panels propelling the ship visible.; Credits: University of Birmingham’s Human Interface Technologies Team (HIT)

AI and Other Advanced Technologies at the Helm

By pairing IBM PowerAI Vision technology with IBM Power Systems accelerated servers (the same technology used by the world’s most powerful supercomputers), IBM is helping ProMare to build deep learning models capable of recognizing navigation hazards which come into view in MAS’s on-board video cameras. Trained on real data and images from the Plymouth Sound in the UK, MAS will be capable of recognizing hazards such as buoys, debris and other ships and will have constant situational awareness thanks to RADAR, AIS (Automated Identification Systems) and LIDAR – the same
technology used in autonomous cars.

When a hazard is detected, MAS will use IBM’s Operational Decision Manager software to help decide autonomously whether to change course or, in case of emergencies, speed out of the way drawing additional power from its on-board back-up generator. Fusing data from nautical maps, sensors and weather forecasts, MAS will be able to determine the optimal path and speed it should take across the Atlantic.

The hull of the Mayflower Autonomous Ship is currently being constructed and outfitted in Gdansk, Poland by Aluship Technology, before being transported to Plymouth, UK later this year. 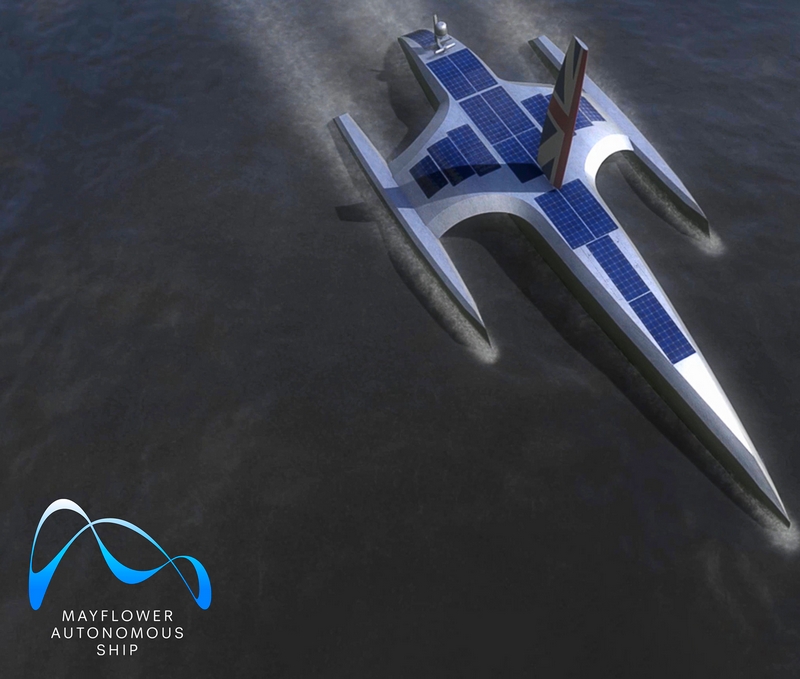 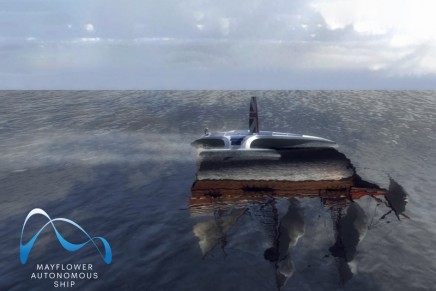 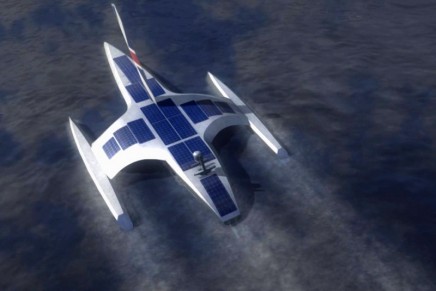 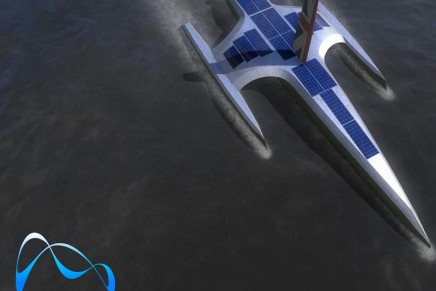 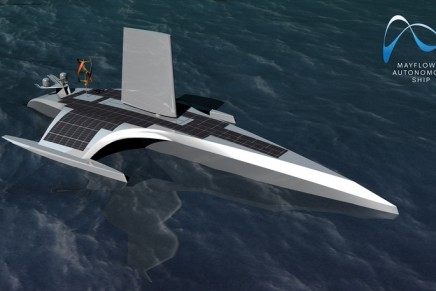