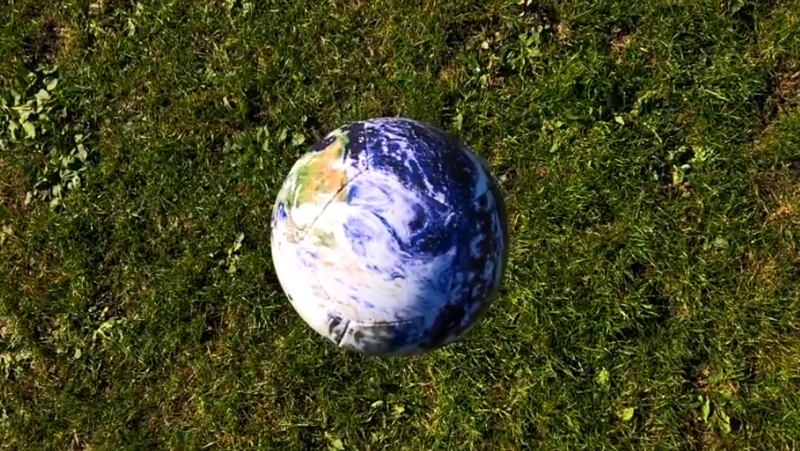 This article titled “Mark Wallinger wants football teams in the UK to kick his artworks” was written by Mark Brown Arts correspondent, for The Guardian on Friday 2nd November 2018 07.00 UTC

Up to 2,000 artworks by the Turner prize-winning artist Mark Wallinger are to be distributed to grassroots football teams across the UK with the message – please do kick it.

Wallinger was commissioned to create a new work of art by the Liverpool Biennial and 14-18 NOW, the UK arts programme marking the first world war centenary.

He has been inspired by the Christmas Truce events of 1914 when, possibly, British and German soldiers came out of the trenches, exchanged gifts and played a game of football.

The artist has used a football as a canvas, digitally printing on it a NASA satellite photograph of the world. Wallinger said he had in mind the celebrated Earthrise image taken during the Apollo 8 lunar orbit on 24 December 1968.

The resulting artwork is called ‘One World’, a contribution Wallinger said to the legacy of the Armistice signed 100 years ago and the Earthrise photograph 50 years ago.

“I wanted to make something which was hopeful,” said Wallinger. “It’s time to stop fighting and start playing, play the beautiful game… the world would be a better place.

“Let’s take that image of a precious and fragile world into the future and celebrate the joy of playing together.”

Editions of the work will be sent to community and grassroots football teams across the UK with a request that people, with “whatever creative inspiration they might have”, upload their own #OneWorld video message.

Wallinger is one of the UK’s leading contemporary artists, winning the Turner Prize in 2007 for his installation State Britain. His work Ecce Homo was the first piece to occupy the empty fourth plinth in Trafalgar Square and he represented Britain at the Venice Biennale in 2001.

He hopes teams will use the football for what it is meant for. “It needs to be used,” Wallinger said. “It is very hard to keep a football indoors, it really needs to get outside. It is an infectious thing. If a ball rolls towards you in the park, you’ve got to kick it.”

The 1914 football match is embedded in the national psyche although whether it actually took is another matter. Wallinger is a believer although he added: “I’m not sure it matters. There were other truces during the war, a kind of live and let live policy, tacit agreements to make repairs and gather the wounded.

“I think it did happen and I think we need to believe it.”