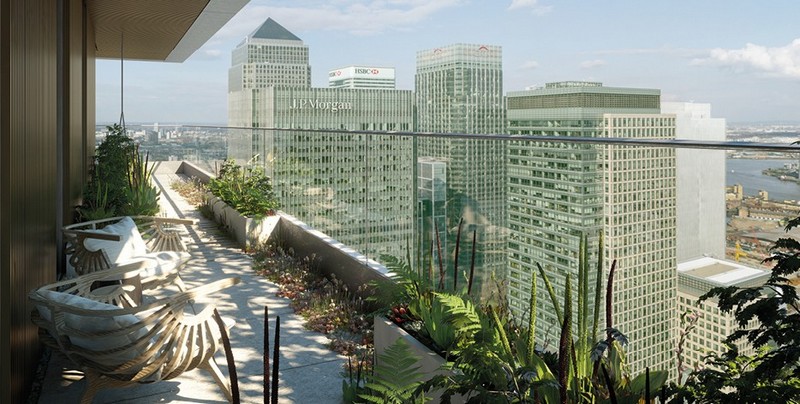 Gardens 55 storeys above ground and London’s highest botanical gin garden are among the selling points of the latest luxury apartment block to go on sale in the capital.

Weeks after unveiling plans for a 35-metre high “sky pool” in Battersea’s Nine Elms, developers Ballymore and EcoWorld will on Thursday start selling the Wardian development in Canary Wharf. As well as the concierge service, private gym and cinema that have become standard with luxury homes, buyers of the 624 apartments in the two new towers will have their own “sky garden”, the largest of which will measure 37.2 sq m.

Named after the Wardian case, a sealable glass container designed for growing or exporting plants, the Wardian towers will be full of foliage, from sunken gardens outside the lobby to exotic plants in the rooftop bar. Even the 25-metre open air swimming pool will be “set within a flourishing tropical environment”.

The two towers, one 50 storeys high and the other 55, were approved by Tower Hamlets council last year and are expected to be completed in 2019. Prices begin at £395,000 for a studio and £525,000 for a one-bedroom flat, while the penthouses will be on sale at £2m. The area is popular with overseas investors, and although the properties will not be sold abroad until next weekend, marketing has already begun in Kuala Lumpur.

Huw Morgan from Camlins, the landscape architect that worked on the project, said: “Green space is one of the most sought-after commodities in London and Wardian London capitalises on this with abundant planting of more than a hundred different exotic species of plants and flowers across the development.”