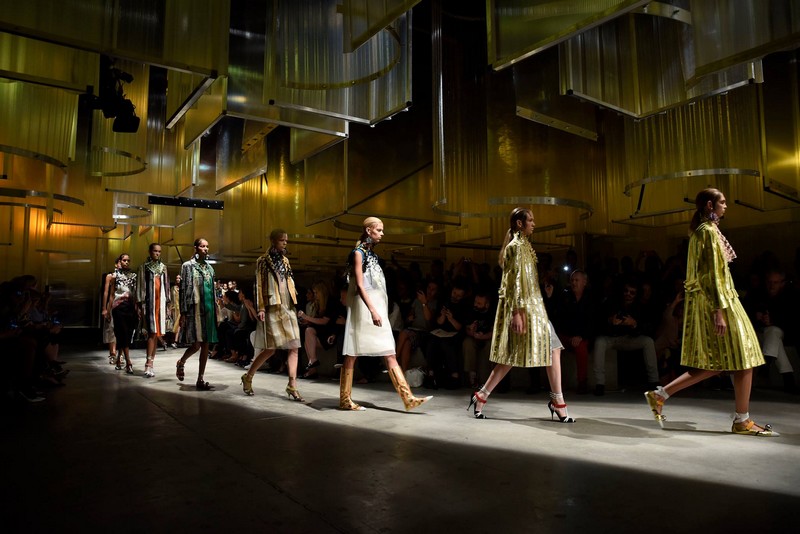 This article titled “Prada calls up memories of other times and dresses at Milan fashion week” was written by Jess Cartner-Morley, for theguardian.com on Thursday 24th September 2015 19.03 UTC

At most Milan fashion week shows, the philosophy behind a sheer skirt is the desire to show a bit of leg, but things are different at Prada. The sheer organza layers were “about the idea of a dress, or the memory of a dress as a memory of another time”, Fabio Zambernardi, Prada’s design director, said backstage.

Muiccia Prada herself was not present, following the death of her 103-year-old aunt the previous day. Mrs Prada had been in the studio until midnight finishing the collection, but had left the day of the show in the hands of Zambernardi, who has worked at the house for over a decade.

Where last season’s womenswear was almost sickly sweet, this show had a melancholic, faintly seedy quality. The clear plastic structures that had hung over the show space for June’s menswear show were lit with yellow bulbs, lending the room a patina of age. Each model had wisps of hair stuck to her forehead and greased down her cheeks into sideburns. The gender ambiguity was, of course, the point. With the addition of a slick of gold lipstick, the look wound up somewhere in the Frida Kahlo field of glamorous androgyny.

The first outfit was a pale leather skirt suit, the jacket blouson-shaped and sporty, the skirt falling loosely to the knee. Then there were more suits, in mismatched tweeds; after that, there were sheer suits. “Mrs Prada was obsessed with suits this season,” said Zambernadi with a shrug after the show. “She likes obsessions.”

Drop-waisted silk dresses stood for “a memory of another time”. They were worn over chunky tank tops, a deliberately off-kilter layering that made these elegant dresses look a little ridiculous, which was probably the point.

The Inside bag that Prada introduced earlier this year – an in-joke of an It bag – starred in intense, brooding colourways. The miniature spike of a kitten heel ended in a flat disc, so that it looked like a shoe balanced on an upside-down drawing pin. The strength of the accessories this season is important, because Prada could do with a hit show. The aesthetic about-turn at Gucci has seen a rival brand that once occupied completely separate aesthetic territory stage a dramatic land grab for the quirky-chic look that defines Prada.

What’s more, recent financial results have been distinctly gloomy. Prada’s net income fell 23% in the first half of the year, to €188.6m. China, once Prada’s golden goose, is now the source of its woes. Consumer spending is down, and Prada has been hit particularly hard, as it has struggled to position itself as equally aspirational as Louis Vuitton and Hermes.