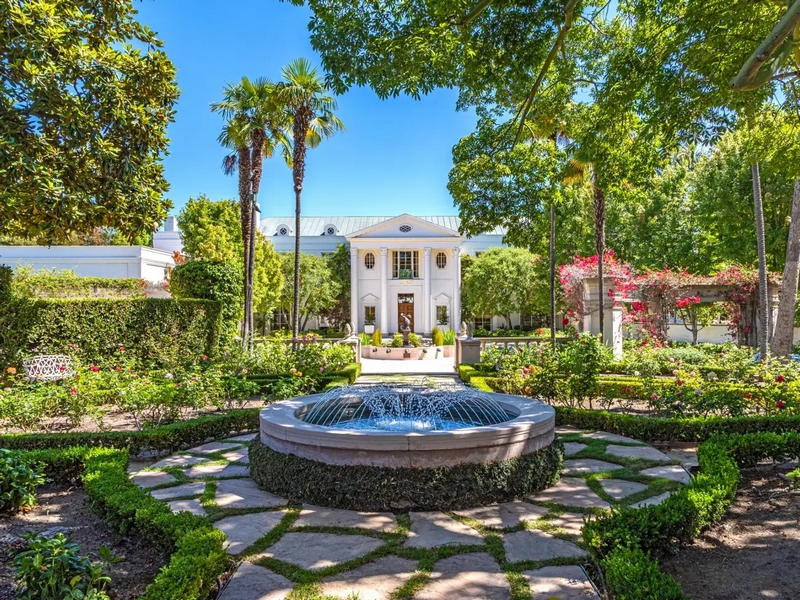 Casa Encantada can become the most expensive home ever sold in California; @Hilton Hyland

The Georgian-style mansion, which sits above the Bel-Air Country Club in Los Angeles, is on the market, listed for the highest price in the United States. It is owned by Gary Winnick, a financier and philanthropist. He purchased the home 19 years ago for $94m, at the time the highest-priced residential sale in the country.

The estate was built in 1938 by Hilda Weber, the widow of a wealthy midwestern bottle manufacturer. She bought the land for $100,000 – considered a fortune during the Depression – and spent more than $2m ($35m in today’s dollars) to build and furnish the mansion with details such as iconic gardens and formal columns. Weber reportedly had a household staff of 21, and she employed another 21 full-time groundskeepers and gardeners.

In 1948, she put the mansion up for sale for $1.5m. There were no takers – until two years later, when Conrad Hilton, founder of the Hilton chain of hotels, purchased Casa Encantada for just $225,000.

The house has played host to presidents and dignitaries from across the globe during its 80 year life. It boasts 18-foot tall ceilings in many of its 60 rooms, an architectural pool house with a professional screening room and formal bar, a north-south lighted tennis court, a separately constructed basketball court, a full guest house, multiple greenhouses, and koi ponds. The Winnicks have made some updates and revisions to the original property.

But it remains to be seen whether it will sell at its eye-popping listing price, says Paul Habibi, a real estate professor at the University of California, Los Angeles.

Habibi says that we’re late in the expansion cycle – when developers create new properties – and the market is at an all-time high in terms of pricing. “Even more relevant is the idea that we have this uber-wealthy segment of society that has the means to purchase such a home,” he says. “The likelihood that a house could sell in the nine-figures is significantly higher than it was five or 10 years ago.”

Still, sales in so-called high-end mansions are slowing after developers hit the sector hard, Habibi says. Another Bel-Air megamansion, which comes with its own helicopter landing pad and bowling alley, has seen its price cut several times to $150m, with no takers so far. The manor owned by Hollywood producer Aaron Spelling took three years and a 40% reduction in price to sell this year – at $120m. “We’re a hundred million away from the next-closest sale,” he says.

According to real estate tracker CoreLogic, LA’s median sale price climbed to $615,000 in May, tying an all-time record, but home sales have slowed even in the non-wealthy market as prices reach new highs. Sales in the $10m and $20m range on the west side of LA have dipped 20-25% this year. “The range between the high end and the median has increased,” says Habibi.

He adds that the typical buyers in this high-end real estate markets tend to be either people who have large inheritances or foreign buyers. There used to be more Chinese buyers, but these days it’s more likely to be someone from the Middle East. Even for the super-wealthy, $225m is a stretch, though. “I don’t think a house is going to sell for $225m,” Habibi says, “because there’s no precedent for that to happen: we’ve never seen it before.”

• This article was amended on 21 October 2019. An earlier version misnamed Gary Winnick as “George Winnick”. This has been corrected.