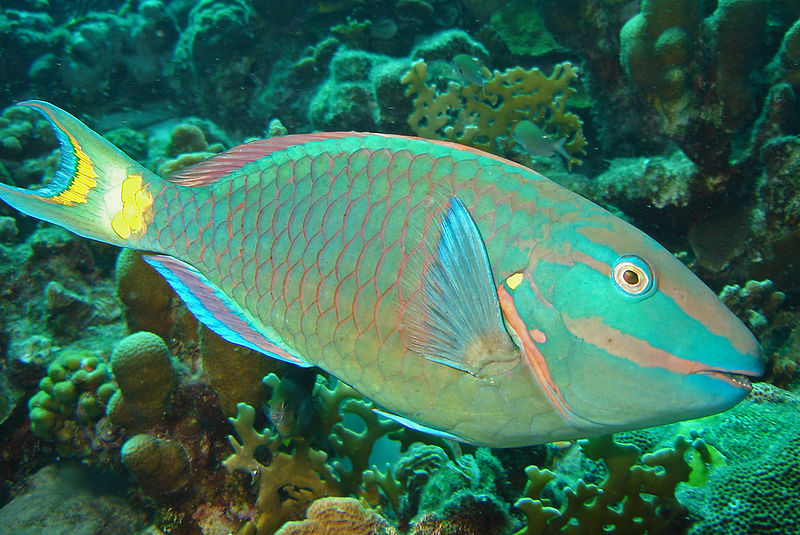 This article titled “Limiting catch of one type of fish could help save coral reefs, research finds” was written by Michael Slezak, for theguardian.com on Monday 4th April 2016 21.59 UTC

Limiting the take of just one type of fish could protect coral reefs around the world from the most serious immediate impacts of climate change, researchers have found.

Studying Caribbean coral reefs, Peter Mumby and colleagues from the University of Queensland found that enforcing a rule limiting the fishing of a single type of herbivorous fish – parrotfish – would allow coral reefs there to continue to grow, despite bleaching and other impacts associated with climate change.

Coral reefs damaged by bleaching or storms can recover when new baby corals settle and grow on the dead old corals. But the new recruits must compete with seaweed. If the seaweed outcompetes the coral, the reef can be lost forever, transforming into a seaweed-dominated ecosystem, where most of the biodiversity is lost.

But herbivorous fish can eat the seaweed, giving the baby corals a fighting chance.

Banning the taking of parrotfish under 30cm, and limiting total catch to 10% of the mass of the total population, would allow the reefs to cope with climate change until at least 2030, the researchers found.

The Caribbean reefs were perfect for the study, but the results were not directly applicable to Australian reefs, Mumby said.

“It’s relatively simple – it has one tenth the number of species of coral and fish than we have here in Australia,” he told Guardian Australia. “In the Caribbean, the parrotfish are the most important herbivores.”

However, the results indicated Australia should also consider limiting the catch of herbivorous fish, he said.

It is the first time scientists have identified how many reef-saving fish you can catch without severely affecting the reef’s ability to recover.

Climate change is increasing the regularity with which damaging events hit coral reefs around the world: the number of severe cyclones is increasing, and with increased water temperatures, corals are much more prone to bleaching when there are bursts of even warmer water.

The future of the reefs depended on how well they could recover from those events, Mumby said.

They then tested the model and showed it could reproduce striking changes that occurred to fish populations and reef health in the region. For example, in Bermuda, trap fishing was rampant until 1990, when it was banned. The traps would only catch fish over 15cm in length. Plugging those variables into the model, it reproduced a change in population that happened when the traps were banned.

Mumby said the current model applied only to the Caribbean reefs, but the results were relevant to Australia’s Great Barrier Reef, which is a much more complex ecosystem, and is in the middle of one of the worst bleaching events on record.

“People’s dietary preferences change. Were some of the other species like coral trout to decline even further, you would expect then there would be a diversification of fisheries – people would start to harvest a broader range of fish.

“Everywhere in the world, pretty much, has eventually developed herbivore fisheries if they haven’t maintained their other fisheries effectively. So how many times do we have to learn this lesson internationally?”

“So Australia is in a very time now to take some action so this doesn’t become an issue in the future,” Mumby said. “It would be a pragmatic issue to deal with now while there isn’t going to be a lot of pushback from stakeholders who are exploiting parrotfish.

“It would be one thing to safeguard reefs for the future,” he said.

The research was published in the Proceedings of the National Academy of Sciences.