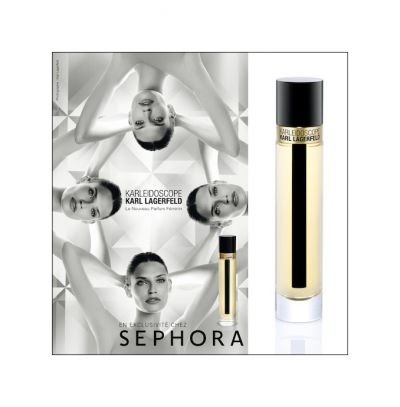 Karleidoscope is the new Karl Lagerfeld‘s self-referencing perfume (launched in European stores on October 11) that comes in a kaleidoscope-shaped bottle. How is the new Karl’s perfume? It features notes of freesia, heliotrope, patchouli, violet, angelica, tonka bean, and …benzoin.

The ad campaign is fronted by Lagerfeld favorite Bianca Balti, who also starred in Lagerfeld’s edition of the Pirelli calendar. Karleidoskope it’s priced range from €39 to €63.

“I love to play with words, as I love to play with scents,”  the designer told Women’s Wear Daily.  “A fragrance is not made to be explained by words. A mix of scents creates something we can smell but not describe…I don’t want to be too technical about the fragrance. I prefer a sentimental approach.”