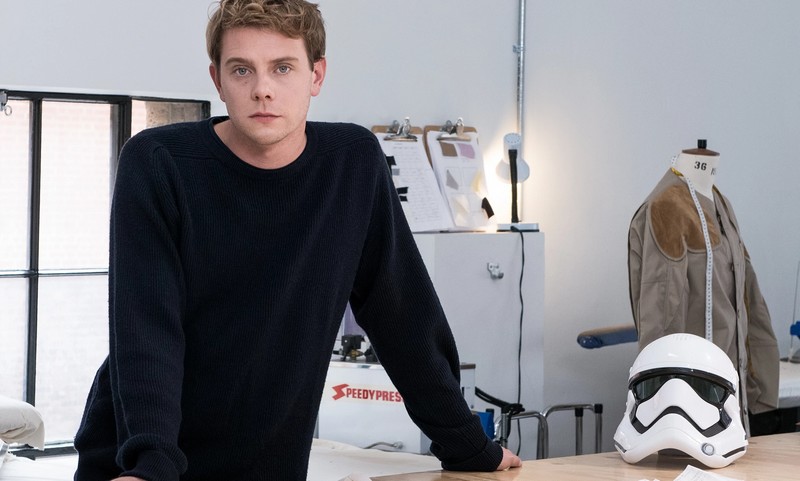 This article titled “JW Anderson on the Star Wars effect on fashion” was written by Hannah Marriott, for theguardian.com on Thursday 19th November 2015 07.04 UTC

There aren’t many fashion designers with whom a conversation about Star Wars would veer from Live & Kicking to a declaration that “boredom is the new electric”, but Jonathan Anderson has never been one for convention.

As creative director of his own label, JW Anderson, and of Spanish luxury brand Loewe, Anderson is one of the most influential forces in contemporary fashion. He is famed for producing designs that may look unsettlingly avant garde at first – think men in blouses and women cloaked in androgynous tunics – but are later widely adopted by the industry.

For autumn/winter 2015, Anderson did high-gloss, brightly hued 1980s brash while his peers were still mining the sepia-toned 70s for inspiration; inevitably, the outlook for spring/summer 2016 is heavy on the lurex. Right now, the 31-year-old affectionately known as J-Dubs says he is thinking about “the normality of people; the normality of textures” and “the idea of boredom” in his work. “Something that is part of society, that feels as though it was always there,” he says – hence the “boredom is the new electric” edict. He delivers these opaque, Yoda-like proclamations with a smile, perhaps knowing that some poor trend forecaster will soon be devoting hours to decoding them.

Anderson’s latest project is a collaboration with Star Wars. Several London labels, including Preen and Nasir Mazhar, have created T-shirts and sweatshirts inspired by the upcoming Star Wars: The Force Awakens film. The tops will be sold from Thursday at Selfridges in London, while catwalk looks will be auctioned on 26 November in aid of Great Ormond Street children’s hospital.

Anderson’s T-shirt and sweatshirt are tie-dyed, which, he says, “looks kind of like the universe”, with patches of graphics from the film. He says the images remind him “of those amazing bedspreads you get as a child.”

Anderson grew up on a farm in Northern Ireland and remembers Star Wars as “go-to escapism films”, which he watched alongside classic 90s daytime TV fare (Live & Kicking and Roland Rat), as well as playing with his brother “building tree houses and making clubs for two people”.

Like many designers of his generation, Anderson does not remember a time before Star Wars existed. He says it has become “so ingrained in culture that it’s as if Star Wars is real. If we ever go futuristic in a collection, there is always a Star Wars reference, even if it’s not actually on the mood board.”

“What I really love in the costumes of the film is that they take hyper-futuristic approaches and then you have this incredible, medieval organic-ness,” he says. “It is incredibly difficult to create garments that are iconic or robots that are iconic,” he continues, “to create costumes that look like a non-moment – a non-decade, if that makes sense – costumes that do not date. You look at the costumes and believe that you already know what they feel like, even though they are completely new. They do not feel fake, which actually makes the whole thing quite uncanny.”

As for the best-dressed characters? The J-Dubs seal of fashion approval goes to the Stormtroopers’ modular, monochrome uniforms, but he also has a lot of time for C-3PO (“I like that you can see the landscape reflecting in someone,”), Han Solo (those knee-high boots, he laughs, are “quite directional”) and, of course, the white robes of Princess Leia (“I think of her like a futuristic version of Elizabeth I; it’s very baptism”).

There is a lot of resonance with his own work, which is also about creating a believable character each season, because “we are living in a period of time which is kind of post-fashion, where you are looking to the past and reinterpreting it for now”. And so the industry will continue to take inspiration from Star Wars, he believes, because “ultimately, everyone’s dream is to create something so iconic”.