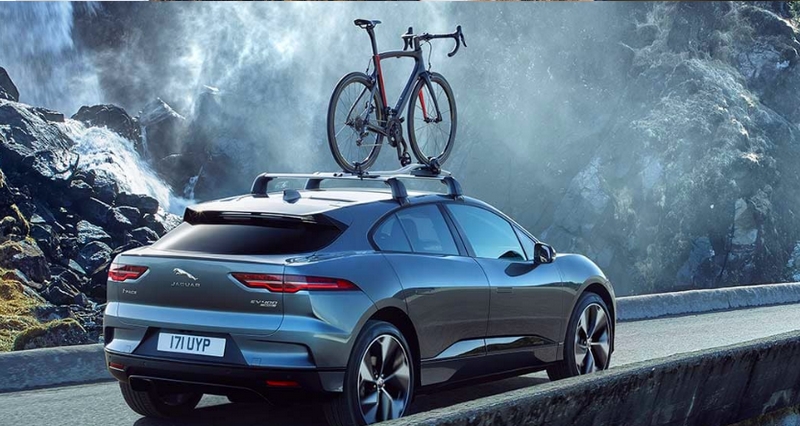 Jaguar I-Pace on the road; @JAGUAR

This article titled “Jaguar I-Pace: ‘An SUV that’s fast, nimble, desirable… and electric’” was written by Martin Love, for The Observer on Sunday 2nd June 2019 04.59 UTC

“But electric cars are soooo naff,” exclaims Sarah. My neighbour doesn’t mince her words, she tends to fire them at you with a tongue as sharp as a Taser. I’d just driven her home after a night out and she was astonished to find the luxurious SUV she’d been lounging in was not some fume-spewing macho SUV, but a battery-powered vehicle. To be fair, few people would guess that Jaguar’s I-Pace is electric. We still think of EVs as being clumsy, boat-like affairs. But this Jag is a different beast. It’s fast, nimble, desirable, high-performing and electric.

Jaguar’s premium EV has swept all before it this year. It scored a historic hat trick by winning the 2019 World Car of the Year, the World Car Design of the Year and the World Green Car of the Year, becoming the first vehicle ever to win all three categories at once. So far more than 11,000 I-Paces have been delivered in more than 60 countries, with 1,800 sold in Britain alone.

The UK is slowly but surely switching to electric vehicles. Last year we bought more plug-in hybrid cars than ever before and the next few years will see a surge in demand as we ditch fossil fuels in favour of electricity. Alongside the likes of the bestselling Nissan Leaf and Kia Niro, high-end manufacturers realise there is also a swelling demand for premium cars that are as clean as they are sumptuous. This niche has been dominated by Tesla, which has had a halo effect on other carmakers as they realise what is achievable when you put your mind to petrol-free transportation – or as Jaguar’s CEO Dr Ralf Speth calls it: “Destination Zero!”

From the outside, the I-Pace is a real showstopper. The cab-forward profile gives it a proper sense of drama, while the chopped nose flanked by frowning front lights hovering over the large air-intakes gives it a meaningful snarl. There is nothing apologetic about it. It’s green and mean. The rear end mirrors the front – it is squared-off with thin, beady wraparound lights. The bonnet is vented, there are large, technical-looking wheels, and polished panels give it a nipped-in waist. Flush doorhandles and a flying spoiler complete the picture. There is nothing about the car that makes you think the I-Pace is an EV. It’s a performance SUV first, an eco-wagon second. Under the polished skin you’ll find a smart and sophisticated operator. Power comes courtesy of two concentric electric motors, one on each axle for permanent four-wheel power. To drive, it has the remorseless appeal of a Scalextric car – one that never spins off the track or burns through its brushes. There are no gears, you just squeeze the throttle as hard as you like and off you go. It doesn’t so much flatter your driving, as get on its knees in fawning obseqioiusness. Along with the digital dashboard and large infotainement screen, it feels more like a driving game than driving in the real world. Some will hate that, but I loved it.

So far, so very good. But now we come to the vexed issue of charging. Clearly topping up the battery is not like filling up at the petrol station. On a slow charge it takes up to 10 hours to do 80%, on a fast charge (if you can find a 100kW point) it’s 40 minutes. It’s complicated. There are different plugs and different providers, subscriptions and memberships. One evening, I spent two hours trying to find a charge point that was both vacant and that I could access. I then had to sit and read my book for an hour while the battery boosted. Most owners will charge at home or at work, but it’s all a bit chicken and egg. EVs need a charging infrastructure to be viable, but there aren’t enough EVs yet to justify a grid. But we’ll get there. Apart from anything, we have to…

High Performance: When Britain Ruled the Roads is a thrilling and fascinating race through the glory days of British motoring by Peter Grimsdale. Order it for £17.60 at guardianbookshop.com