In an era when humanity is facing new challenges posed by big data, bioengineering and climate change, Whitechapel Gallery has invited ten groups of artists and architects to explore the potential of collaboration and offer their visions of the future. They imagine scenarios in which queer desire, house music and fracking meet on a mountainside; grief and microbes generate new possibilities for housing; or machines dispense objects and emotions to support our place in the technological world of tomorrow.

Is This Tomorrow? takes as its model Whitechapel Gallery’s landmark exhibition This Is Tomorrow (1956), which featured 37 British architects, painters and sculptors – including Richard Hamilton, Eduardo Paolozzi and Alison and Peter Smithson – working collaboratively in small groups. 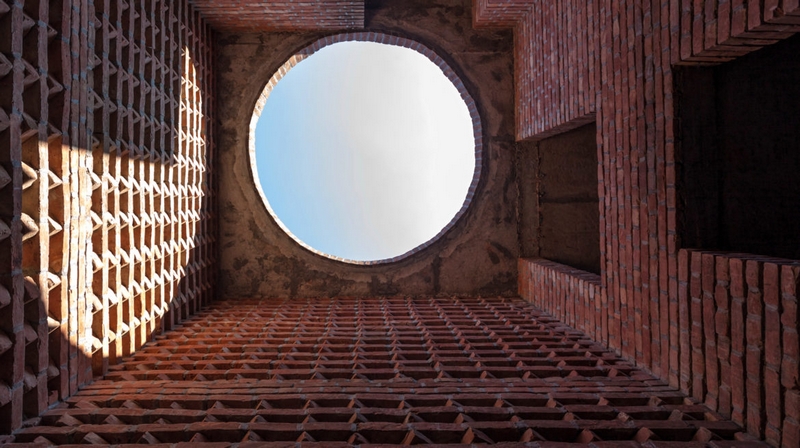 Exhibition “Is This Tomorrow?” at Whitechapel Gallery, London photo: whitechapelgallery.org/exhibitions/is-this-tomorrow/

This article titled “Is This Tomorrow? review – back to the future as architecture meets art” was written by Rowan Moore, for The Observer on Sunday 17th February 2019 08.00 UTC

“Strange, yes,” barks a Pathé news voiceover, calling us across the decades from 1956, “but provocative and exciting.” He’s talking about an exhibition, This Is Tomorrow, at the Whitechapel Gallery that – for the strength of its thinking and the later achievements of its protagonists – still reverberates. Coordinated by the architect Theo Crosby, its aim was to bring together art forms in what Pathé primly called “proper collaboration”. It featured the young brutalists Peter and Alison Smithson and the proto-pop artists Richard Hamilton and Eduardo Paolozzi. Ernö Goldfinger, whose 31-storey Trellick Tower is now an unofficial national treasure, was in it. Reyner Banham, the most exciting architectural writer of his time, wrote an introduction to the catalogue in the form of a semi-poem.

With their new show, Is This Tomorrow?, the Whitechapel is consciously remaking its old hit, with the historic newsreels shown by way of reminder. Here, too, artists are teamed with architects and asked to consider, in some way, the future. They have recruited a thoughtful and talented crew. Also a multinational one, with representatives from Mexico, Bangladesh, China and Spain, and others with origins in Iran, Ghana and Japan.

Farshid Moussavi and Zineb Sedira, for example, have made a labyrinth out of security turnstiles that says something about borders and migration. David Kohn and Simon Fujiwara invite you to stick your head inside an architectural model of imaginary themed display spaces, which drives to hyperabsurdity the already absurd phenomenon of the maybe-Leonardo, Salvator Mundi, sold at Christie’s for £342m. Scenarios include a recreation of the auction room where it was sold, or of the domestic stair hall in which it hung before its discovery.

The show avoids obvious messages, however true they might be: Trump Is Bad, say, or Data Capitalism Is Scary

The exhibition’s change of title from statement to question is telling. If in the 1950s architects and artists felt empowered to shape the future, now they seem happier only to interrogate it. The other significant shift is in the assembling of the team. The 1956 show was put together by Crosby from his friends and allies, especially from what was called the Independent Group, and proposed to the Whitechapel as a package. The 2019 edition is put together by a curatorial team led by the gallery’s chief curator, Lydia Yee.

This maybe reflects a shift in power in the museological world from creators to curators. It certainly means that the new show – even allowing for the tendency of the past to look more directed than it was – is more discursive than the old. This Is Tomorrow insisted that art and architecture should be part of everyday life, and on an anti-snobbish attention to ordinary streets, everyday objects and the culture of magazines and advertising. Is This Tomorrow? leaves a less clear message to posterity.

Which is not to say that it is not engaging and provoking. Spirits Roaming the Earth by Andrés Jaque and Jacolby Satterwhite is an evil-looking black mountain, encrusted with organic and artificial material, which breaks open to reveal a video of an imaginary tower animated by orgiastic scenes. Some scrolling texts on adjoining screens explain that the piece is about some combination of fracking, Edward Snowden, gay porn and financial elitism. The words are verbose, but I’m grateful for at least one insight: it’s weird how the architecture of extreme wealth and extreme hedonism is typically wrapped in cool glass. This exhibit takes the wrappers off.

It is certainly the most dystopian work. In general, thankfully, the show avoids obvious messages, however true they might be: Trump Is Bad, or Data Capitalism Is Scary. Some content themselves with making dreamy spaces that seem to say little more than that it would be nice if the world might be like this. Rana Begum and Marina Tabassum, for example, make a calm white room with a circular opening in the ceiling, its edges multicoloured, for looking towards the sky. David Adjaye and Kapwani Kiwanga have made a pavilion out of dichroic glass that creates multiple reflections, transparencies, colours and shades. It is like a Dan Graham sculpture, only friendlier.

Mind Garden, Heart Garden, by Mariana Castillo Deball and Tatiana Bilbao, takes a bit of explaining, being a work of steel frames and looping coloured metal based on a magnificently perverse ceremonial calendar (13 days in a week, 260 days in a year) used by the Aztecs. Once you get it, it grows on you, as a delicate suggestion that you might live by less frantic measures of space and time.

The piece that holds it all together is the first one you see when you enter the exhibition. This is Enclosure, by 6a Architects and Amalia Pica, in which the equipment used for managing animals – sheep pens, equestrian show-jumping poles, cat-scratching posts, cattle-feeding troughs, toys for seals – form a plausible but nonsensical assembly. Its beauty is in its reality, as this material is already out there and in use, while also revealing unconscious attitudes to animals and nature.

It hints at themes running through the show, such as barriers and exclusion, without ramming them home, and can be seen as both sinister and fun. Although it is neither as sinister nor as fun as the single best moment in the exhibition, in the Kohn and Fujiwara piece, where an animated, interactive version of Salvator Mundi is offered, with the serene features of the maybe-Leonardo breaking out into hideous rictuses of communication. “If you’ve got a rigid approach to art you’ve come to the wrong place,” as Pathé News said in 1956, but “it gives everyone something to think about.”

• Is This Tomorrow? is at the Whitechapel Gallery, London, until 12 May