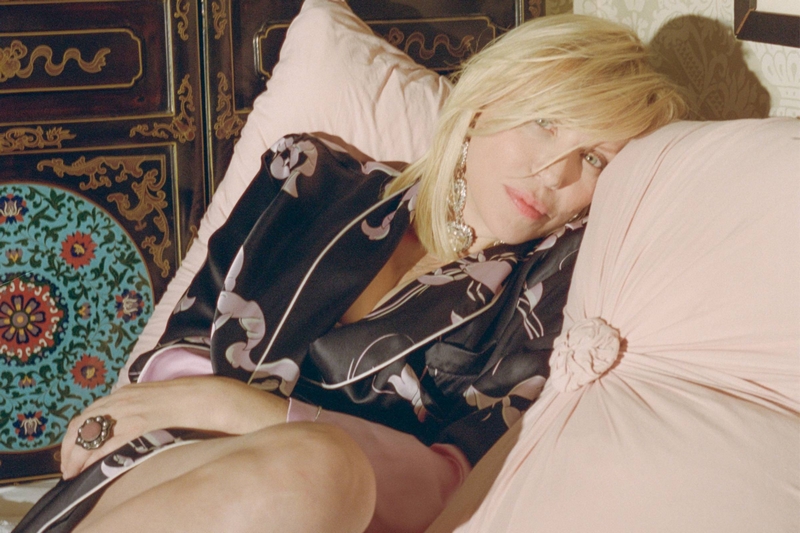 This article titled “‘I talk to my clothes’: why Courtney Love is selling her best-known outfits” was written by Sam Wolfson, for theguardian.com on Friday 7th December 2018 09.00 UTC

Courtney Love is one of those rare figures whose sense of style helped to define an era. Her love of ruffles, lace and vintage slip dresses injected the baggy grunge aesthetic of the 1990s with a burst of an antique heresy. Her alternative style even inspired Marc Jacobs’ spring 1993 collection for Perry Ellis (the brand decided he had gone too far and the pieces he sent to Love and Kurt Cobain were burned, but it went on to make Jacobs’ career). As her career moved into acting, she flirted more with high-fashion. After her role in The People vs Larry Flynt she was nominated for a Golden Globe and was invited to the Oscars, where she wore such distinctive gowns that she won a VH1 award in 1997 just for her sense of style.

Now, after nearly three decades of wearing nice clothes, she is selling some of her best-known pieces on Heroine.com, the upmarket sister to trendy resale site grailed.com, with some of the profits going to her sister Nicole’s anti-bullying charity, Stand for Courage.

Love has kept a near-meticulous archive of her clothes throughout her career but, speaking to her on the phone from her home in Los Angeles, she says that the process of deciding to sell certain pieces has been cathartic. She also did a similar sale in 2011, via eBay.

“A woman’s wardrobe should be a living breathing thing. It’s who you are. If it’s River Island and Primark, you still have your staples and your colours, and if you’re trying to stuff in that sequinned skirt that you never wear I believe you’ve got to throw it out. I don’t really miss stuff that much. The things that I’ve grown out of, they’re out.”

Love’s process for deciding which clothes can stay and which should go is a little unorthodox. “I talk to my clothes. I say: ‘Do you wanna go away for a while? Wendy, come back!’ The way I let my crazy out these days is standing in my wardrobe asking my clothes how they are.” She says the ones that were ready to go tell her “we don’t like you any more mummy”.

Love’s stylist Anastasia Walker, who helped her select the pieces for sale, says it was hard not to be blown away by what is in her wardrobe.

“I think, for Courtney, it’s just her everyday life. Coming from an outside perspective, you’re stunned by like, a Slimane piece, something he custom-made. But she’ll just be like, ‘yeah, it’s awesome’. She’ll have great stories from the night she wore something, but she says: ‘I’ve worn it already, it’s time to move on’.”

Love’s obsession with vintage fashion predates her music career. She previously worked in the costume department at Paramount and would often steal antique pieces that she had been asked to dispose of. But her appreciation of the great fashion houses came from a friendship with Gianni Versace. He guided Love through some of her early fashion decisions and proved to be a transformative presence on her style. It was Versace who famously dressed her in a white gown for the Oscars. Afterwards, Time magazine wrote: “Last year she was still rock’s open wound … the same woman who used to apply lipstick the way toddlers mash crayons was demurely turned out for the Oscars in a chiffon Versace gown. It was the most thorough transformation since Eliza Doolittle met Henry Higgins.” Or, as Love puts it: “After I met him, I stopped wearing slips”.

Most of the pieces Love is now selling are from high-end labels: glamorous gowns and jackets from the past decade – a long way from her babydoll dresses of the 90s. The sale includes an off-the-shoulder black Vivienne Westwood dress, a pink Galliano gown and a Saint Laurent suit.

Reflecting on another key moment in her fashion graduation, Love recalls being spotted in the lobby of the Mercer Hotel by Karl Lagerfeld and his long-term creative collaborator Amanda Harlech. “Amanda sees me and says: ‘why are you wearing a Tutu?’ and Lagerfield looks at me and says: ‘You’re not getting laid in a tutu.’ So I went to my room, moved all my antique shit aside and found a navy Miu Miu dress, a beautiful taupe coat and put it on. That was the end of it. And I got laid, it was great.”

She tells me about the other women who have helped define her style, such as her longterm collaborator Arianne Williams, as well as her friendships with Anna Wintour, Katie Grand and Ricardo Tisci.

Yet I can’t help but wonder if the leading light of 90s rock’n’roll will be able to immerse herself in a world where there are dresses that cost more than cars and have her fans be as immersed as they were in her music. But Love says she is hopeful that this sale will be inspirational.

“I’ve always shopped at Topshop, back in the day I would only shop there, Urban Outfitters and vintage. I didn’t have any money then, I would collect little things. Even after that Versace moment, Michael Kors still had to tell me what taupe was. I really am looking for how we can make this [sale] resonate … and, you know, it’s for charity.”