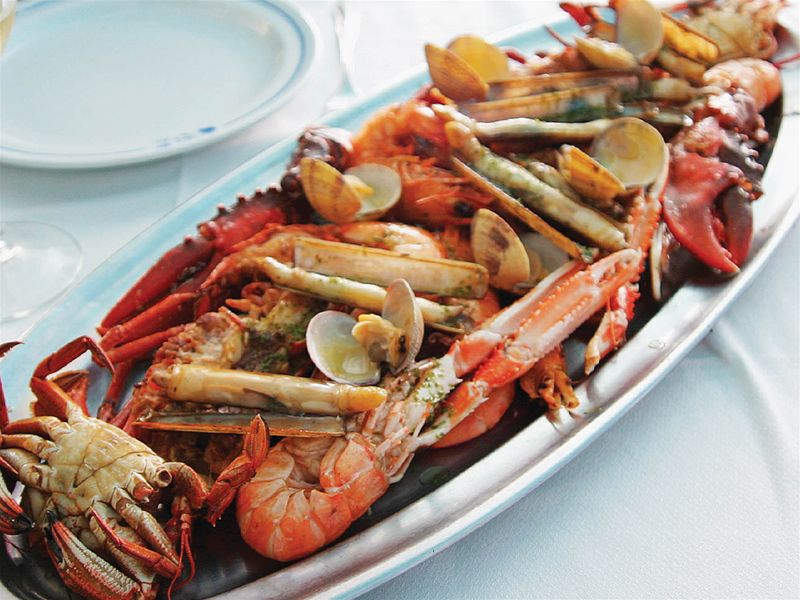 This article titled “How food makes a holiday” was written by Vicky Frost, for theguardian.com on Tuesday 14th July 2015 09.48 UTC

Never mind your hot dog legs – show me the actual sausages. If there is any better use for Instagram than perving on friends’ holiday eating, I don’t know it. Those sun-baked fruit platters, dishes of oil-slicked seafood, trays of colour and texture and sometimes slightly unidentifiable stuff, are the best reasons to travel. Long after the tan has faded and the stress returned, a whiff of something familiar and delicious can transport you back to a table warmed by the sun, and the food shared around it.

So when it comes to choosing where to spend those precious two weeks of summer holiday, food is almost as high in my priorities as sunshine. Not in a tour of top-class restaurants sort of way – though I have (more organised) friends who plan their trips exactly like this, with their dinner bookings made almost before their flights – but with markets, street food and local restaurants more in mind. Where will we eat well – and affordably – for the length of our holiday?

For us that’s often Turkey: returning from town, fingers already stained the deep red of cherries, with bags of stickily ripe green figs to be eaten with sharp, creamy local yoghurt; Balık ekmekçi – grilled fresh fish and onions wrapped firmly in pillowy bread – devoured on the banks of the Bosphorus, under the watchful eye of hopeful seagulls; piles of crisp, fragrant calamari to be fought over with friends. (Bad luck if one of those friends is me.)

It will be Greece for many, for reasons other than good food (though, from delicious meze to stifado, Greek cuisine can stand with the best of them). For others it’s Italy: a Sicilian holiday dinner of pasta with sardines, sultanas, anchovies and pine nuts still talked about in revered tones by those who ate it; my first bite of pizza in Naples still memorable more than a decade later; and oh god, the gelato. And of course, there’s France, an ordinary salad of tomatoes, shallots and garlic with a chucked-together vinaigrette made almost legendary one family holiday by a combination of ripe fruit and hazy evening sunshine.

One friend travelled to China to basically celebrate his own street-food festival – he says he’s still yearning for the rice noodle skewers that come doused in chilli or cumin salt, and fried using an old hand iron and a tin sheet. Others visited Argentina for the ultimate steak and red wine (the amazing pasta and ice cream an unexpected bonus), and Sri Lanka for its richly spiced curries and incredible daal.

Sometimes the food adventure is in the actual travelling. A journey on the trans-Siberian railway where it became quickly clear that every item on the menu was mutton, regardless of its description as something else entirely. A train ride to Syria where there was a sign for a buffet car but no actual carriage beyond it, resulting in hasty picnics of bread, hard-boiled eggs and ripe peaches assembled from station kiosks. A flight to India, where the usual sad airline food was replaced with an awe-inspiring curry, with impressive sides, popadoms, and pickles.

And sometimes the food adventure is not in restaurants at all, but in home kitchens. I often end up on self-catered jaunts because if you love to cook, a table full of great produce and lots of time in which to prepare it can be a proper luxury, for a couple of nights at least. There’s something particularly lovely about doing this in Britain: ditching the supermarket and snuffling out local foods.

But better still, of course, is sitting at the home table of a local. A friend who has a Lebanese husband raves about traditional mezze and Beirut streetfood, but saves her highest praise for home-cooked Lebanese dishes such as bemyeh (rice vermicelli, okra and meat stew) and laban ummo (yoghurt soup with lamb chunks). I’ve always thought it’s how Airbnb should work, but I’ve yet to be offered a meal by anyone.

Related: Holiday food: how to find the best restaurants abroad

Can you really recreate that holiday taste when you get home? After a year-long stay in Sydney I yearn for properly ripe avocados smashed on to toast with lime, olive oil and coriander, to no avail. But I turn often to Sabrina Ghayour’s excellent cookbook, Persiana, for a mouthful of Turkey and Syria without the airfares. The joy of perfect tomato bulgar wheat, and chicken fragrant and tart with preserved lemons.

A friend’s chilli is worth traveling for in its own right – we will joyfully skip across town (or even country) to devour it – but it’s also the result of 24 years trying to replicate a revelatory Mexican food experience on a childhood trip to California. (He won’t ever outdo that first real chilli moment, he says, but he’s getting closer. The trick? Lots of time, bourbon and beer.)

Talking of which, even those who love the country cannot recommend traveling to Germany for the food – “I can honestly say I have never been anywhere in Germany for the cuisine, nor been tempted to cook a massive pork knuckle or make potato soup when I got back,” says a translator friend who visits often and has great affection for the place. But the beer? That’s an entirely different matter.