These ladies’ watches excel in the art of mechanics and enchant lovers of beautiful watchmaking. Six watches to be loved passionately in all their versions: 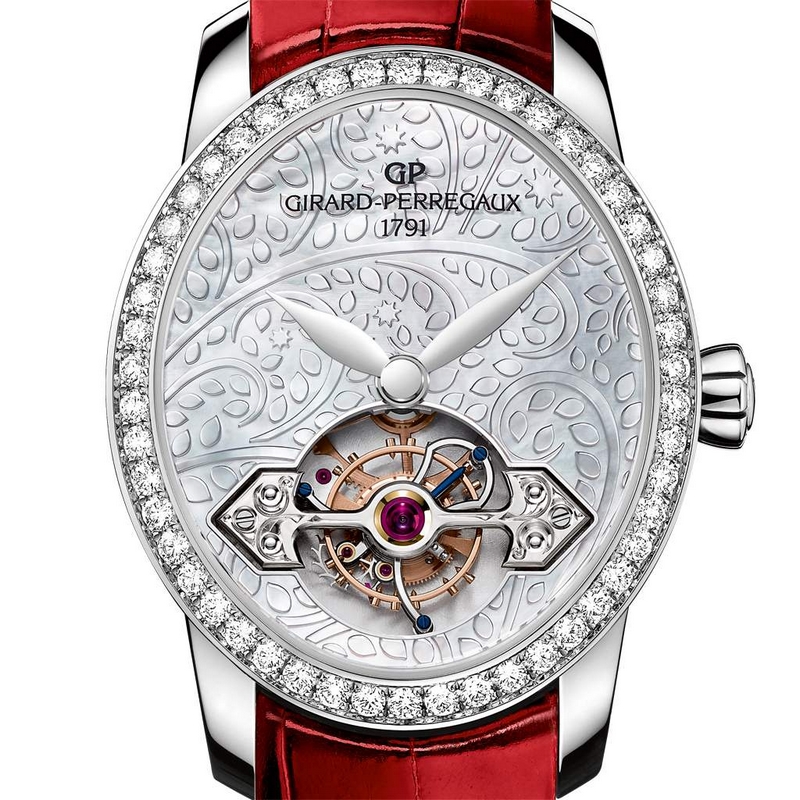 At 6 o’clock, the iconic Girard-Perregaux Tourbillon, an embodiment of the company’s expertise, reigns majestically under a Gold Bridge delicately carved with a floral motif that echoes the dial. It precisely regulates the running of the manually wound calibre GP09700-00012.

Containing 174 parts decorated, adjusted and assembled by hand, its perfect finishing is another sign of the exacting standards of Girard-Perregaux, a pioneer in producing beautiful mechanical watches for women. 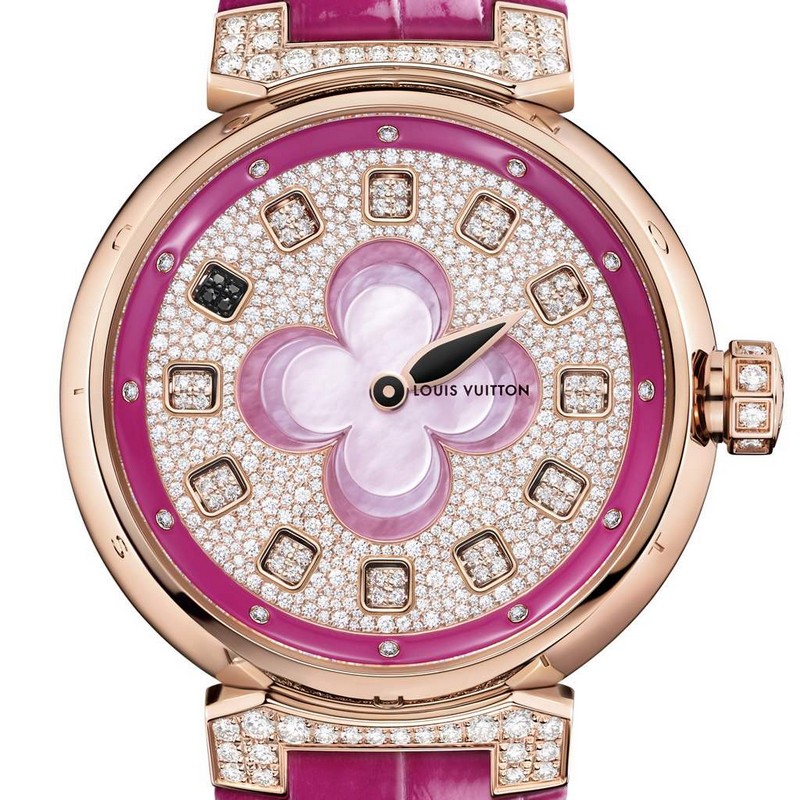 Each Tambour Color Blossom Spin Time flower is sculpted in three dimensions from a single piece of mother-of- pearl, the shapes and details emulating every gesture of the hand, according to the technique used for cameos. Shades of blue or pink are then applied to the reverse of the piece, again by hand, to create a delicate, nuanced effect.

On the Tambour Monogram Tourbillon, one of the petals of the flower is replaced by the flower-shaped cage of the tourbillon, a movement created by the Fabrique du Temps Louis Vuitton. Likewise the Tambour Spin Time, a movement allowing the time to be read thanks to a series of rotating diamond-studded cubes placed around the central flower. 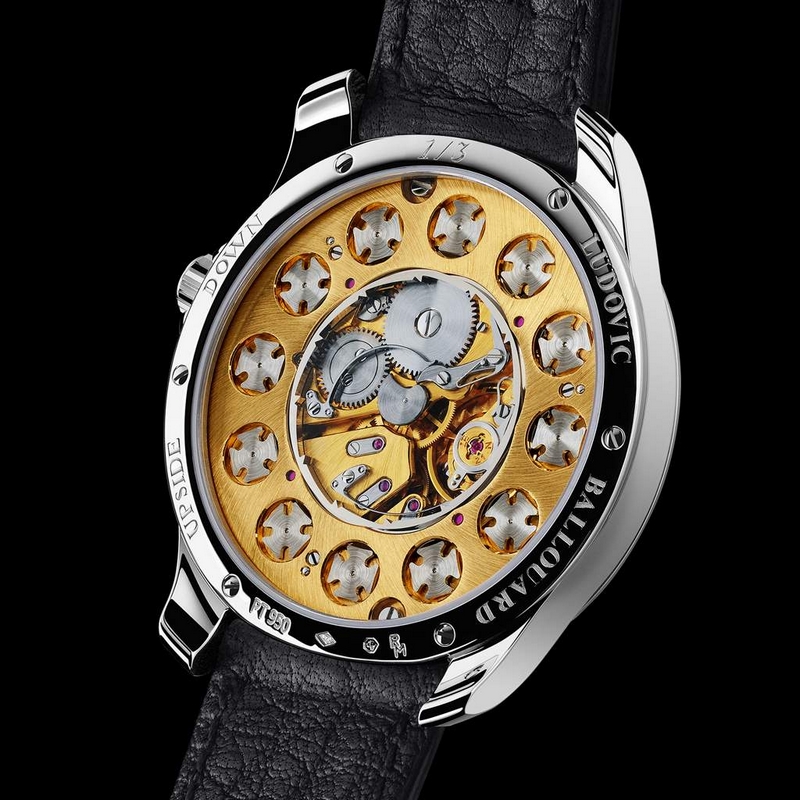 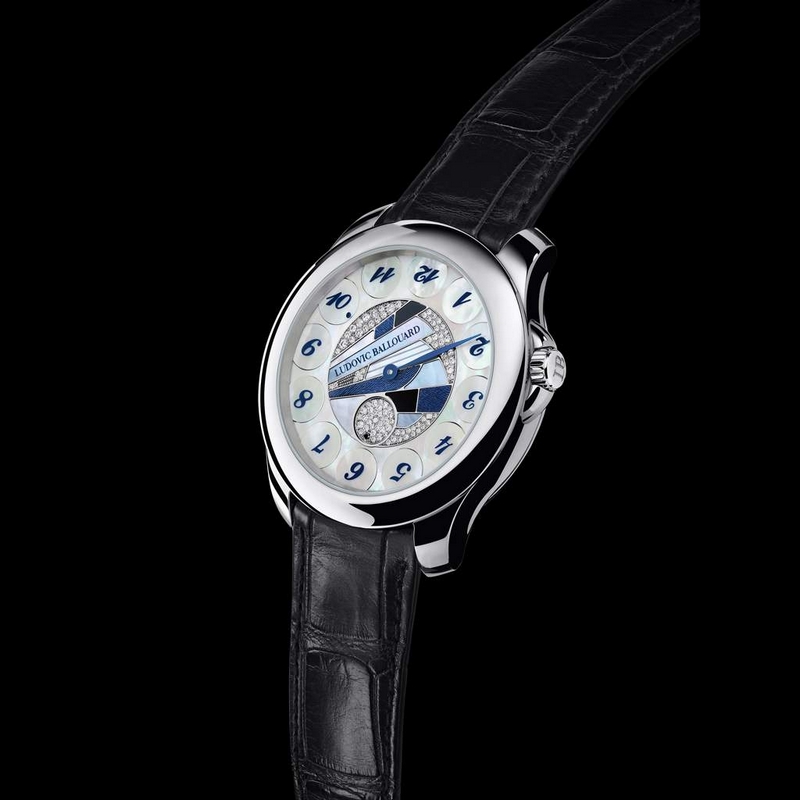 There are always 11 upside down numbers and one – the current hour – the right way up. The right-way-up number is made even easier to spot by a black dot (or index) that appears in front of it. The numbers flip instantly at the end of the 59th minute of each hour. Art Deco Upside Down watch has just one hand, indicating the minutes. The seconds are shown on a rotating disc, which is fully set into the dial at the number 6 position.

After coiling around the wrist, Bulgari’s snake symbol is now reinvented by wrapping itself for the very first time around the case of a round watch: the reptile literally twines itself around the watch dial, framing an entirely skeleton-worked Manufacture tourbillon calibre. This timepiece is available as a rare and exclusive creation, issued as a limited 50-piece edition. 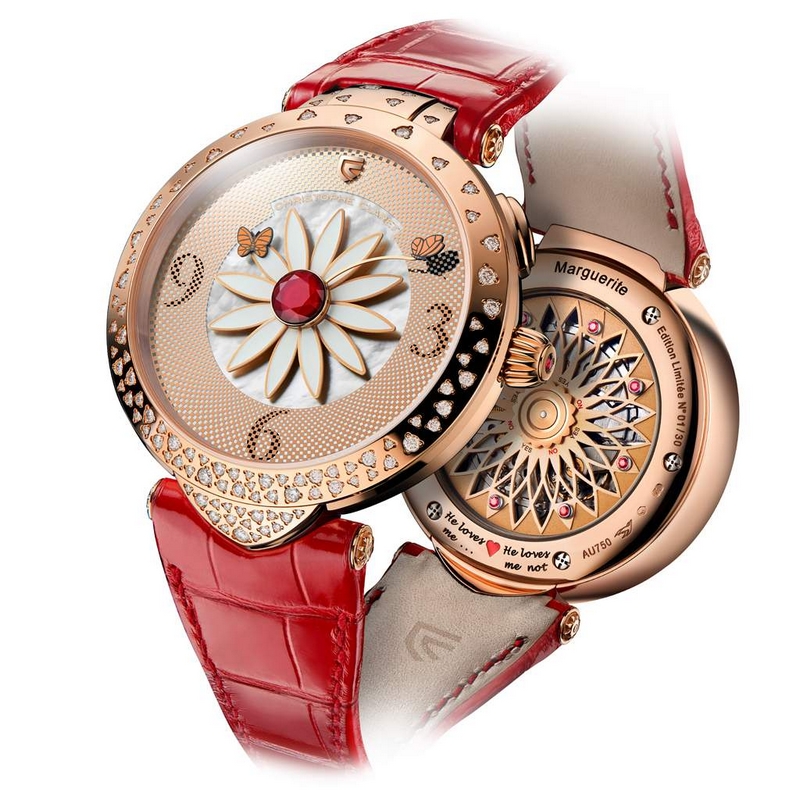 Marguerite is part of the Margot line, Christophe Claret’s very first ladies’ model. At the heart of this new watchmaking fable, interpreted in five versions, two graceful butterflies flit around a daisy whose white lacquered petals overlap in the same way as a real flower. Christophe Claret invites two butterflies in blue, orange, red or green Super-LumiNova, depending on the version, to provide a joyful escort for the passing of time. The darker one, symbolizing the female, is perched on a daisy petal that rotates every hour. Meanwhile, the lighter one, embodying the male, indicates the minutes. Sitting lightly atop a stem attached to the precious pistil made of rubies, blue sapphires or emeralds, it literally flutters around the white mother-of-pearl dial. 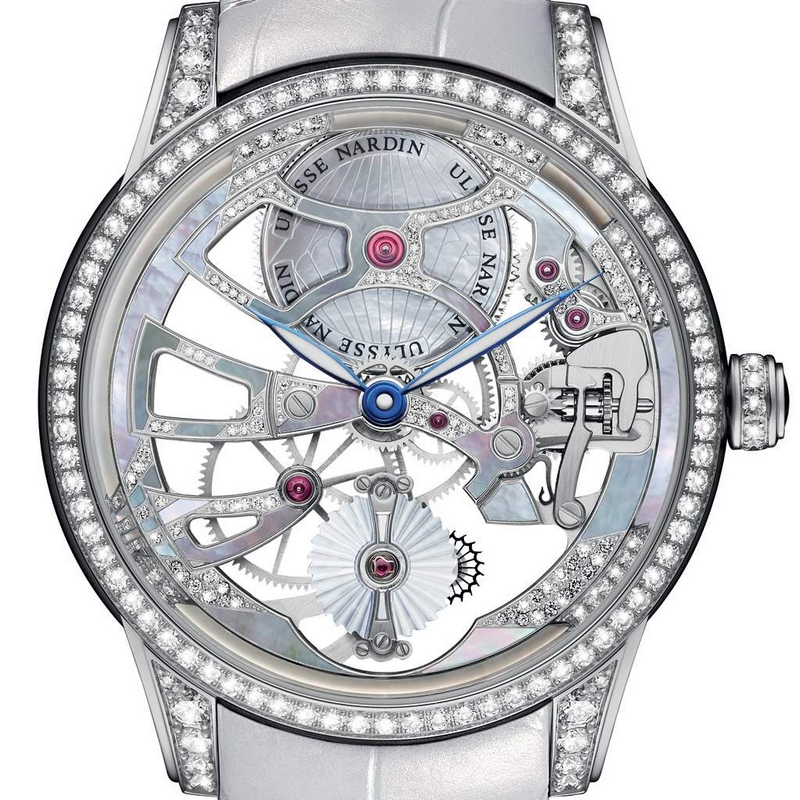 Radiant in luminosity, its iridescent mother-of-pearl detailing casts a soft glow over the entire piece. Delicately pure in aesthetic, the exquisite sea-cultivated material is complemented by an abundance of diamonds on its face, bridges, bezel, horns and crown. In this rare timekeeper, the in-house developed Skeleton Tourbillon Caliber UN-170 Manufacture – with its seemingly infinite maze of individual movements, parts and skeletonized bridges – is its hallmark.

In skeletonizing, the structure of components is reduced to a bare minimum. It is this reduction that allows light to permeate through, thus giving a watch the appearance of weightlessness. The entire movement seems to float on air. Equal part art, equal part watchmaking mastery, skeletonizing personifies why less is captivatingly more. 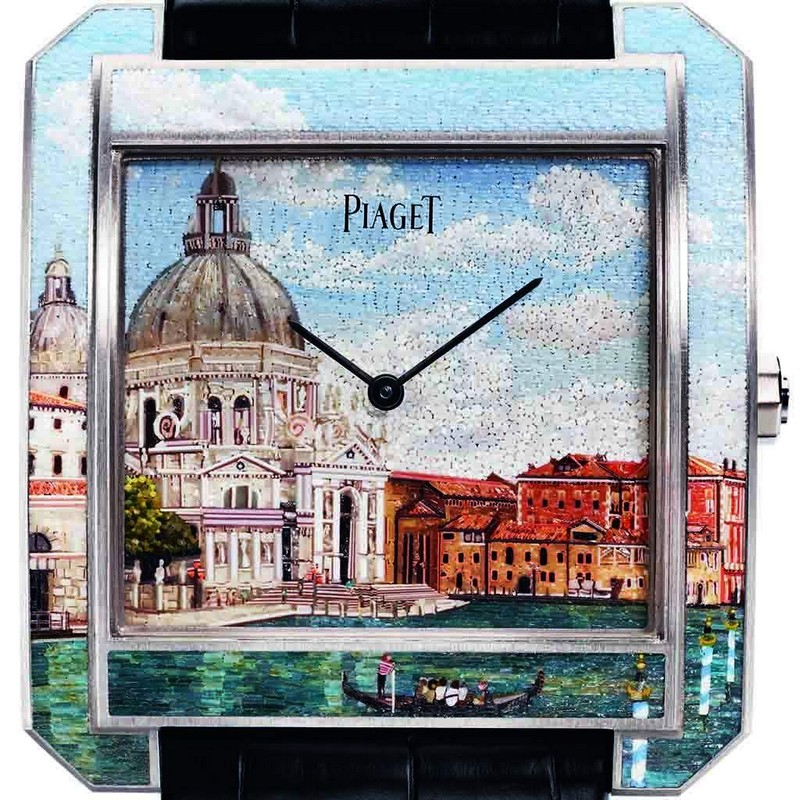 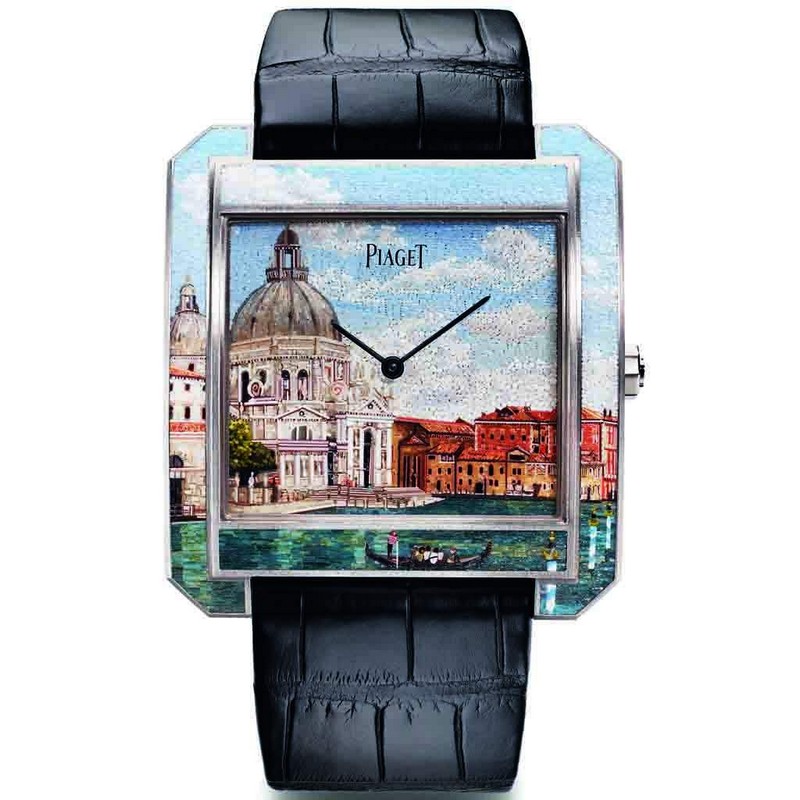 The micro-mosaic technique was used by Italian micro-mosaic specialist artist Cesare Bella for decorating the this Venice-inspired timepiece from dial to bezel. Cesare Bella created a masterpiece of precision by juxtaposing nearly five thousand miniscule glass tesserae, which combine to reveal a remarkable view of the Santa Maria Della Salute basilica overlooking the Grand Canal. 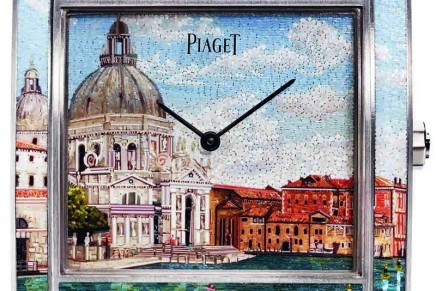 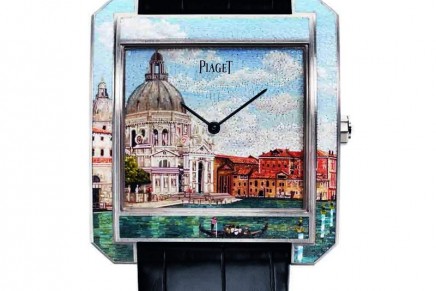 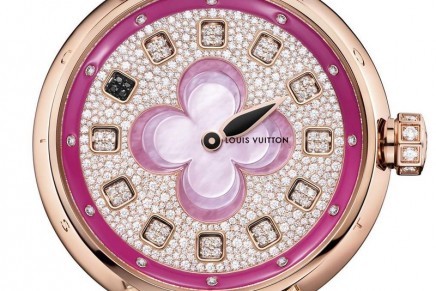 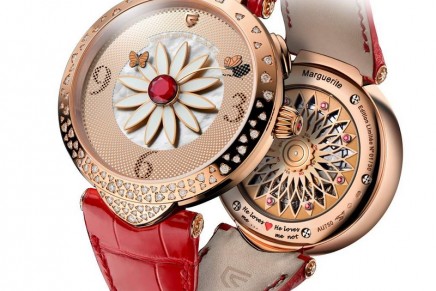 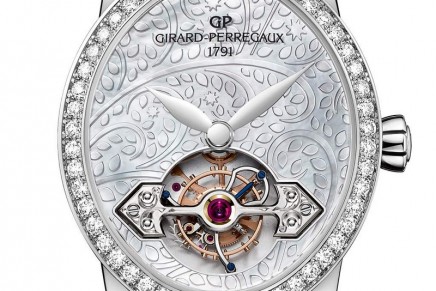 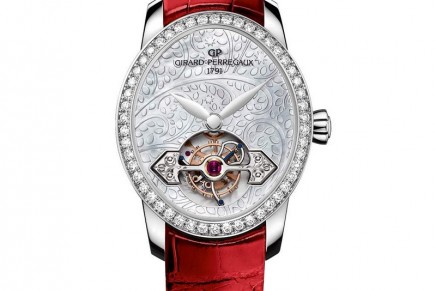 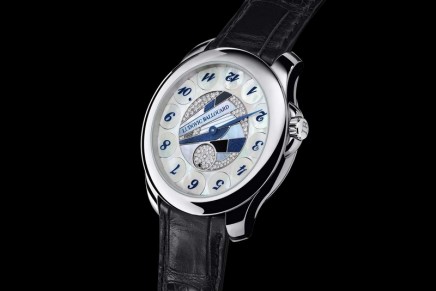 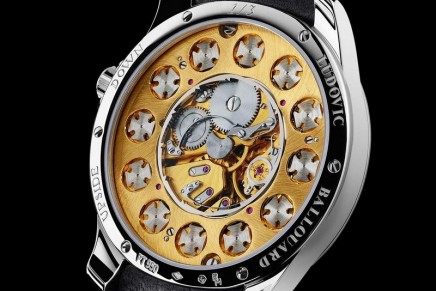 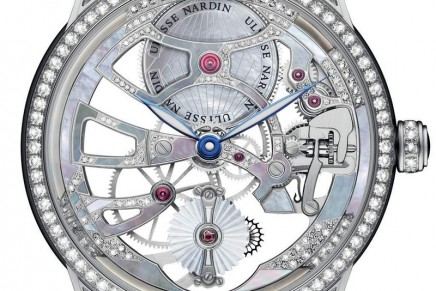