The Hepworth Prize for Sculpture recognises a British or UK-based artist of any age, at any stage of their career, who has made a significant contribution to the development of contemporary sculpture. It is named after Barbara Hepworth, a sculptural pioneer in her own time, who benefited from prizes throughout her life.

The shortlisted artists this year are Michael Dean, Mona Hatoum, Phillip Lai, Magali Reus and Cerith Wyn Evans. Presenting new and recent work, each of the artists demonstrates a singular voice that pushes the potential of the sculptural object in new directions. 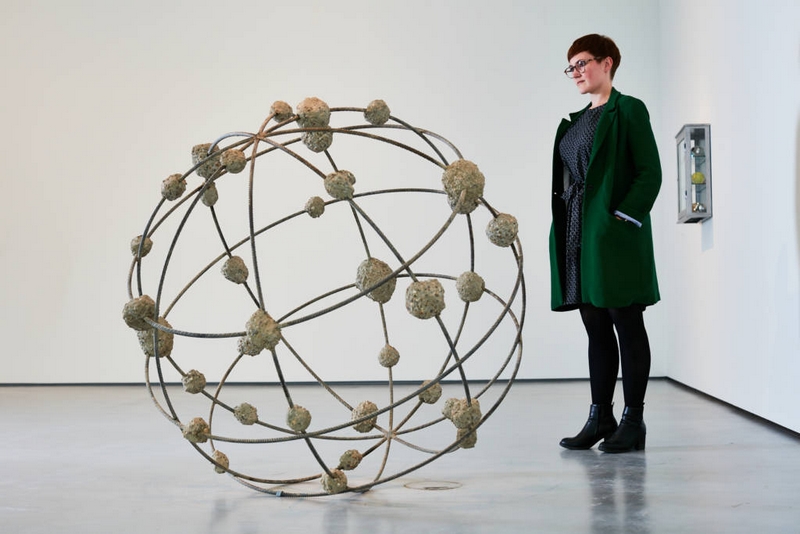 A visitor looks at Orbital by Mona Hatoum in The Hepworth Prize for Sculpture. 26 October 2018 – 20 January 2019. Photo, David Lindsay

This article titled “Hepworth Prize for Sculpture 2018 – from messy misery to a dash of magic” was written by Adrian Searle, for theguardian.com on Friday 26th October 2018 14.24 UTC

‘SORRY”, reads the incident-scene tape, again and again, that makes its way around Michael Dean’s wreck of an installation in the second Hepworth Prize for Sculpture in Wakefield. I say wreck positively. More an apology than a cordon, the tape droops its way about the room. The scene is extremely bleak and intermittently funny. More tape repeats the word BLESS, as if some faint hope might be found here. No such luck. Flattened drinks cans and casts of crossed fingers and decaying plastic and hardened sacks of concrete create a mock-up pavement crossing the room, a scene from Britain’s economic war zone. Drifts of spilled pennies count out 24 hours’ worth of minimum wage and a single person’s three-day emergency food bank allowance. No wonder you keep your fingers crossed. Padlocks festoon miserable love hearts, tokens of togetherness when the world is ripped apart, and bent metal bars and lengths of plastic guttering spell LOL as you make your way over the grim terrain.

There is a great deal of incident and detail, but Dean’s Of Or for LOL seems to me more focused than his recent displays at Baltic in Gateshead, or his 2016 Turner prize installation. For a scene so messy and wretched, it is more concise. Even so, there is a great deal to it. You can spend a lot of time with your eyes cast down, looking for coins in the cracks, discovering pouting aluminium lips stuck to the ground with pink bubblegum, and reading the mangled verbiage on the drinks cans and in the litter of papers that flower like weeds amid the rubble. There’s not much to laugh out loud about. David Cameron misconstrued LOL as meaning “lots of love”. This seems to be a key to Dean’s latest work.

As though to echo Dean, Mona Hatoum presents a small globe whose rebar lines of latitude and longitude are also connected by lumps of rubble, each just the right size to be thrown in a riot or a street protest. Much of Hatoum’s work here will be familiar to anyone who saw her Tate Modern retrospective, and her display is a small reprise of her preoccupations: Murano glass hand grenades in a medical cabinet, another small globe of the world on a stand, the continents drawn in red neon, and on the floor a circle of black marbles that catch the light – a work as malevolent as it is gorgeous.

Hatoum imbues the everyday with eruptions of violence. In the next room Phillip Lai presents arrangements of homely plastic washing-up bowls, folded and rolled lengths of PVC foam and sheets of polyurethane rubber. Rather than sourcing them from a pound shop, he cast the bowls in concrete moulds. The artificial plastic hues are dirtied and stained by the concrete, as if the bowls had been used for mixing stuff in a sculptor’s studio. His arrangements are a kind of still life – I thought of Morandi’s dusty, muted colours – and object lessons of simple sculptural ploys – rolling, stacking, folding, inserting and swaddling. There is something to do with nurturing going on here. Lai invests these ordinary objects and materials with a sense of care and protection. One thinks of domestic activities such as cooking and cleaning, as well as of a sculptor’s processes. I like these works. Less so his mounds of old clothes, or a very large brushed aluminium worktop on which stand two spouted vessels.

Both Lai and Magali Reus’s work are crafted and precise. Reus’s work – most recently seen at the South London Gallery – shares certain formal gambits with the sculpture of Helen Marten, who won both the Turner prize and the inaugural Hepworth prize. There are plenty of clues to unravel. One series features large fibreglass casts of sombrero hats. With their stanchions and brackets, and bars that look like big spirit levels, these sculptures can be taken as armatures to hang your hat on. But wait. They are really figures. One stands before a rolled-up shop shutter, a wine bottle dangling at an angle. Another features a boot and a begging bowl. And here is a petrol can and a radio. The imagery proliferates. As soon as I grasp some beginnings of a figure or a narrative, it slips away. I think of a kind of synthetic cubism, which tries not to tell a story as well as describing a form. Another group of sculptures have colourful fire hoses, woven in a Dutch weaving workshop (Reus is originally from The Hague) as a core element. They tease me and leave me baffled – puzzles without any clear solution.

A low and mournful hum leaks through the galleries, produced by Cerith Wyn Evans’s floating glass sculpture. Is it sculpture, or drawing, or a musical instrument? All these things. Thirty-seven crystal glass flutes, like spokes or rays of light, emanate from intersecting circles. Wyn Evans relates these circles to halos in Buddhist paintings. I thought of Botticelli’s drawings from Dante, the clarity of his line, and the delicacy of Wyn Evans’ glass forms. The flutes are connected by plastic tubing to a pair of “breathing units”. The two main elements play to one another in a forever shifting algorithmic call-and-response that goes back and forth with no end. Wyn Evans thinks of the work as “a threnody for Barbara”: I imagine the wind blowing through the holes in Hepworth’s own sculpture, a constantly modulating play between an object and the air.

How rich, how delicate this is. Wyn Evans’s work is as much about light and space as air and sound. The elements become interchangeable. The whole thing slows us down. The glass forms, the sonorous sound, the light in the room, the shadows on the wall, the vibrating air all add up to something as magical as it is magisterial. Such a complex pleasure deserves to win the award.