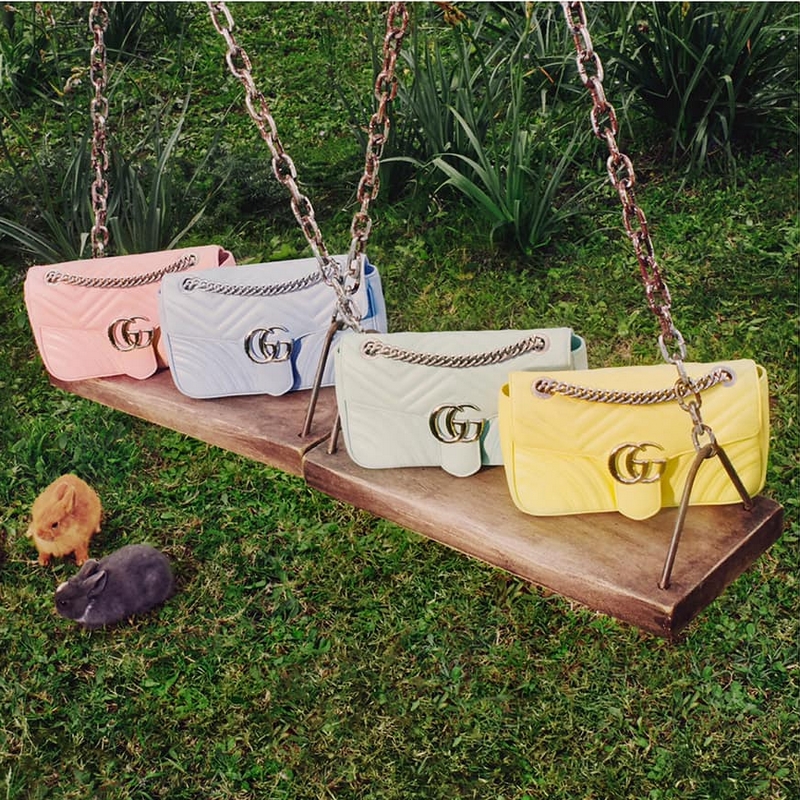 This article titled “Gucci bids farewell to fashion week as brand goes seasonless” was written by Jess Cartner-Morley, for The Guardian on Monday 25th May 2020 16.06 UTC

Fashion week is over, according to Gucci. In a virtual press conference broadcast from his Rome studio, the label’s creative director, Alessandro Michele, announced that Gucci was slashing the number of fashion shows it holds each year from five to two.

Declaring the fashion week calendar obsolete, Michele said he was no longer adhering to a rota staked out by spring/summer, autumn/winter, cruise and pre-fall shows.

“I think these are stale and underfed words … clothes should have a longer life than that which these words attribute to them,” he said. Instead, the brand will show “seasonless” collections twice a year. There are no plans for a show in September, when the Gucci collection would normally be staged as a key part of Milan fashion week.

The carousel of international fashion shows has been stopped in its tracks by the coronavirus crisis, with menswear and haute couture shows scheduled for June and July cancelled, and the September fashion weeks in doubt. Now, a question mark hangs over not just when – but whether – the merry-go-round of catwalk events will restart.

Michele’s comments elaborated on a series of personal diary entries posted on the Gucci Instagram account on Sunday, which made a link between “performative” fashion shows and the problem of sustainability.

“Above all, we understand we went way too far,” Michele wrote. “Our reckless actions have burned the house we live in. We conceived of ourselves as separated from nature, we felt cunning and almighty.”

Michele, who has a passion for flowery maximalism that encompasses his prose as well as his clothes, added: “We usurped nature, we dominated and wounded it. We incited Prometheus, and buried Pan.

“So much haughtiness made us lose our sisterhood with the butterflies, the flowers, the trees and the roots. So much outrageous greed made us lose the harmony and the care, the connection and the belonging.”

Gucci’s announcement is significant because the Italian powerhouse is by far the mightiest brand to come out in support of a move to a leaner, less wasteful fashion system.

Dries Van Noten has led a number of independent designers calling for a radical overhaul of the industry, with fewer fashion shows and less product. Discussion on this topic has been ongoing in the industry for the past month but the superbrands have until now been mostly silent.

The biggest labels, which have profited the most from the system as it stands and have the necessary financial cushion to ride out the incoming economic crisis, have been less motivated to radical change than smaller brands. By throwing their weight behind the forces of change, Gucci has the ability to shift the balance of power in this conversation.

Last month, Saint Laurent announced it would sit out Paris fashion week this September and set its own schedule going forward, a decision made in amid “waves of radical change”.

The brand will “lead its own rhythm … [and] take ownership of its calendar”. Saint Laurent’s opt-out was notable because its catwalk shows, held on the Friday evening of each Paris fashion week on a huge open-air catwalk directly beneath the Eiffel Tower, have become a red-letter date in the French fashion calendar, drawing a supermodel cast, a celebrity front row and large crowds who watch from behind barriers. The absence of a marquee name central to the notion of Parisian chic is a blow to Paris fashion week’s status as the heart of French fashion.

Gucci’s revenue for 2019 was €9.6bn (£8.6bn), dwarfing its Kering stablemate Saint Laurent, which recorded revenue of €2bn for the same period. As the largest and most profitable brand in the Kering luxury group, which also owns Saint Laurent and Bottega Veneta, Gucci exerts influence across the industry.

Gucci’s influence is not merely economic. Since taking over five years ago, Michele has positioned himself at the progressive edge of fashion’s engagement with culture.

On the catwalk, his male models wear pussy-bow silk blouses and babydoll dresses. He has dressed the pop star Harry Styles in pearl earrings on stage and the actor Jared Leto in a floor-length evening gown on the Met Gala red carpet.

His embrace of gender fluidity has revolutionised the traditional codes of menswear embedded in Italian fashion, and shifted the mainstream away from what he has called “an aesthetic of toxic masculinity”.

Overhaul of the fashion week system and its heavy carbon footprint has been mooted for years, but in 2020 change is becoming an economic necessity. Kering and LVMH, the two largest luxury groups, recorded a drop in revenue of about 15% for the first three months of this year.

In recent years, Gucci has staged blockbuster shows at Westminster Abbey in London and at the Capitoline Museum in Rome, in addition to events during fashion week. The latest cruise collection had been scheduled for an unveiling in San Francisco last week, until the pandemic forced cancellation.

• This article was amended on 26 May 2020. An earlier version incorrectly said that Gucci and Saint Laurent’s 2019 revenues were €9.6m and €2m, respectively.