The Fabergé Museum in Baden Baden, Germany paid €800,000 to acquire a work by the Russian artist-jeweler Peter Karl Fabergé – the official goldsmith of the Russian imperial family. The $1.1 million breakfst plate casts Fabergé in a new light. The artst was best known for the opulent Easter eggs created for Tsar Alexander III and family.

This jewelry sculpture work, however, is in the style of the Russian avant-grade. The stone-cut jeweled still life depicts a leftover breakfast plate with a fried egg (made from amber and white enamel), two fish (silver — one whole, one just a skeleton), a glass of vodka (rock crystal), cigarette butts (quartz and silver), and a newspaper made of silver from 18 October 1905 — the day the Tsar signed the October Manifesto in an attempt to quell unrest in Russia by granting the people various civil liberties and democratic reforms. 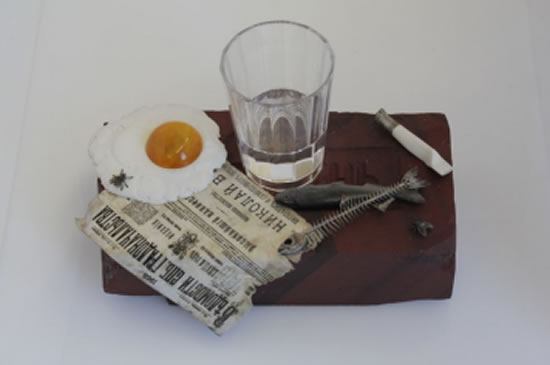