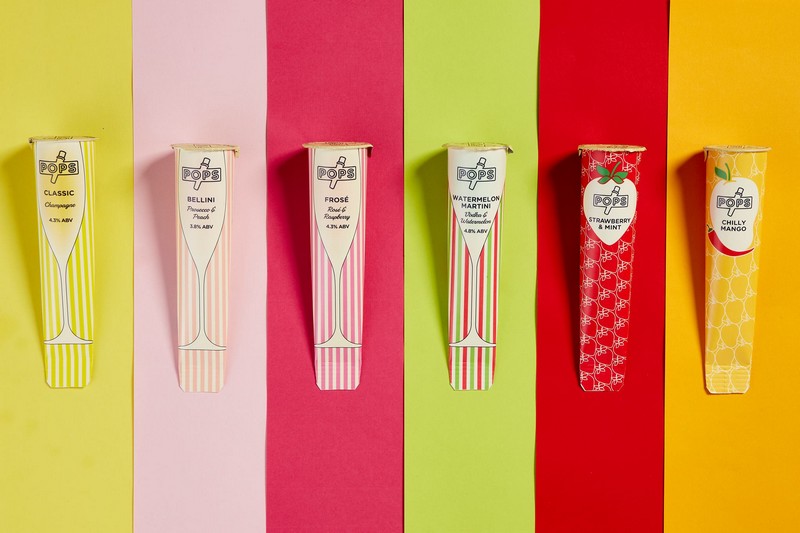 This article titled “From G&T to Earl Grey tea: a new wave of ice lollies for grownups” was written by Zoe Wood, for The Guardian on Friday 29th June 2018 13.13 UTC

Whereas the choice used to be standard fruit flavours such as strawberry and orange in bright colours and novelty shapes, a wave of new British food brands have begun serving up “gourmet lollies” aimed at adults, with adventurous flavours ranging from Earl Grey tea to alcoholic watermelon martini popsicles.

The next big thing, the posh lolly experts predict, will be dipping them into shot glasses containing the same sort of alcohol for a particularly intense flavour hit.

“Frozen is one of the markets that has not evolved,” explains James Rae, a co-founder of the London-based Pops, which has scored a hit with its alcoholic “premium popsicles”.

“Look at what what has happened with tonic water, confectionery and craft beer over the past five years,” Rae continues. “Frozen food was boring and controlled by the usual suspects. Very few people were doing anything with lollies. There was a gap for an adult-focused product that was refreshing and quirky.”

Frozen is one of the markets that has not evolved

The adult ice lolly market is one of the fastest-growing product areas in the ice cream market, with sales up 23% to £40m in the past year , according to Kantar Worldpanel, which tracks UK grocery sales trends. Much of the boost is down to the success of boozy ice lollies, with supermarket chains such as Aldi having already spotted the trend and launching its Gianni’s range of cocktail-flavoured popsicles.

While British consumers eat ice cream all year round – the market has surged by nearly 10% to break through the £1bn sales barrier over the last year – it takes a heatwave to trigger a rush on ice lollies. According to sales data, ice lolly sales only really take off when the temperature tops 24C.

Mass-market ice cream makers have also come under pressure as consumers seek healthier or more artisanal versions but new makers have flourished – such as Little Moons, with its Japanese-style mochi gelato balls, which can be skewered together to create a lolly.

It is not only a UK trend. Unilever, the biggest ice cream maker in the world and the producer of Magnum, Ben & Jerry’s and Wall’s, blamed disappointing summer sales last year on competition from the low-calorie brand Halo Top, which has taken America by storm.

“Since May we’ve not had chance to breathe,” Rae adds. Ice pops sales have doubled this year and the company – whose financial backers include the Fever-Tree co-founder Charles Rolls and the gastronome Loyd Grossman – is forecasting sales of £3m for 2019 from a standing start four years ago. Tesco has just agreed to stock its Pimm’s-flavoured lolly.

Another brand trying to raise the stakes is Ice Kitchen, which is run by Cesar Roden, the grandson of the food writer Claudia Roden, “We want to be a challenger to Wall’s and other mainstream brands,” says Roden, whose bestsellers include the mojito poptail. “These are chef-inspired lollies with natural ingredients.”

“We believe that the alcoholic ice cream trend is here to stay,” Roden says. “Aldi has brought a lot more awareness to alcoholic lollies.” He believes consumers will become more experimental and predicts the next trend will be dipping lollies into a shot glass of paired alcohol. “The ice lollies soak up a lot of the alcohol, which then creates a whole new tasting experience.”

We asked three Guardian lolly lovers to taste and test some of the new posh popsicles.

“Refreshing packed with lots of flavour.”

“Very tasty and good news is it has low calories!’’

“A nice palette cleanser after a summer barbecue.”

“What’s nice is that you can taste all the individual flavours in it – as if you were having the drink itself.”

“Very zesty and strong in flavour, plus a nice texture.”

“I’d buy them again as it’s a fun way to keep cool with pals.”

“The real slices of peach add a great texture to the ice lolly.”

“The colours are nice (dark purple and orange) and the flavours are just as good.’’

“I would buy this in the local shop if they had it, for sure!”

“I enjoyed this more than I thought, considering it’s a weird squidgy ball with ice cream inside. It does taste great, though.’’

“Would take these to a dinner party as a fun pudding – or just eat all of them myself before I go!”

“Tastes nothing like rosé – bitter and left a strong aftertaste.”

“Not sure I’d ever want rosé as an ice lolly.”

“Smells like holiday but don’t let the lovely smell deceive you.’’

“Tastes like a really weak watermelon Haribo … not nice.’’

“I was excited to try this but it tastes nothing like a watermelon or a martini … just a bit odd.’’