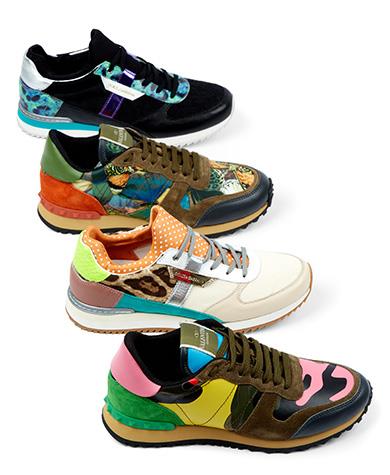 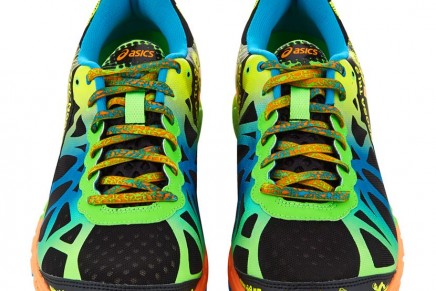 This article titled “Fashion’s obsession with running” was written by Hannah Marriott, for The Guardian on Tuesday 21st April 2015 15.26 UTC

Aside from the odd punchline (see: the “yogging” scene in Anchorman) you don’t hear much about jogging these days. “To jog” sounds like something Madge Bishop might do on a sunny day in Ramsay Street. Instead, in recent years, a far sleeker verb – “to run” – has taken over, conjuring up images of picturesque forest pathways and blurs of black lycra.

It is this athletic vision that the fashion industry is currently obsessed with. Magazines including Elle, the Gentlewoman and Grazia have all featured reader runners’ clubs; talk of specialist trainer brands has become an integral part of front row chatter (as it happens, Victoria Beckham thinks Asics are the best). A fair few fashion people are taking part in the London Marathon this weekend, including Hugo Boss PR manager Tamara Klien, whose workout buddies include fellow fashion PR Elle Hankinson, an ultra marathon runner.

If you believe the Devil Wears Prada stereotypes about the industry’s obsession with thinness and its competitive nature, fashion’s love affair with running may seem like a no-brainer. But the industry’s runners talk of more wholesome motivations. “Running is the easiest way to lose weight,” says Klien, “but that’s not my aim. I can clear my head with running. It’s spontaneous. And I have always preferred to be out in nature rather than in the gym.”

Editor-in-chief of Elle UK, Lorraine Candy often commutes to work with a run, and her staff join her in a weekly jaunt “from fashion cupboard to Regent’s Park” every Wednesday lunchtime. She sees the boom in running as partly a feminist issue: “It’s about women being strong and feeling energised,” she says. “There are so many inspiring female athletes – including Paula Radcliffe, who is running her last marathon on Sunday. It’s also a real everywoman sport. Women of all shapes and sizes and backgrounds can run. The fashion industry likes a trend, and it is a trend, but it’s also something you can do, entirely, by yourself – you can put your trainers on and go, any time.”

Penny Martin, editor in chief of the Gentlewoman, is part of a Saturday morning club at her local coffee shop, Paperback in South Ealing: “Running side-by-side is such an ice-breaker,” she says. “It’s so much less confrontational than talking face to face. Within a couple of runs I knew all about my fellow runners’ divorces, their career implosions, even one woman’s birth control preferences! You’re all red in the face – it’s a great leveller and creates such a nice bond.” It sounds a long way from the hardcore world of Barry’s Bootcamp classes. “You look at the industrial atmosphere that’s supposedly cool in most urban gyms and you almost want to experience the opposite,” she says. “Women’s running clubs often have something of the Fun Run, mums’-keep-fit-class atmosphere about them, and that’s actually really chic in its way.”

Martin believes fashion’s love of running is clearly linked to the efforts of Nike, which has increasingly targeted female customers in recent years and is wooing the fashion press hard. Tactics include a “concierge service”, which provides a select bunch of fashion editors with a personal trainer who will run them around Milan, Paris, New York or London, ensuring they arrive at the next show with a glow. “You’re aware you’re participating in marketing,” says Martin, “but it’s hard to be snarky when you know how much good it’s doing you.” Afterwards, she says, “that editor who feels so energised is sitting on the front row telling the other editors ‘you’ll never guess what I did this morning …’” This fashion season, the biggest bragging rights went to models Karlie Kloss and Natalia Vodianova, and fashion editor Derek Blasberg, who casually did a half-marathon mid-way through Paris fashion week.

Just as sports companies are wooing women, fashion companies are increasingly experimenting with sportswear, with the annoyingly named “athleisure” trend credited with boosting all US footwear and accessory sales by 1%, or bn in 2014. But though Adidas’ Stan Smiths currently outnumber high heels at industry parties, fashion people tend to stick with genuine sportswear on the track. For one thing, a slightly wonky seam can cause incredibly unglamorous weeping sores after a long run, so technical features must be prioritised. And looking as though you have tried too hard is just not cool. “I think pro runners would be really suspicious of anyone who was dressed up like a Christmas tree in all the latest gear,” says Martin, who eschews pink, patterned “lady” sports gear for the clean boxy lines of men’s Nike.

Trainers can be a complex issue – though there is some snobbery towards Nike, with brands including Asics and Mizuno bestowing more ‘serious runner’ points, they do have a sound technical record, and Pegasus Zoom and Lunar Glides are popular with the fashion pack. One unlikely source of pizzazz and even status is socks. Stella McCartney’s Stellasport collection for Adidas centred around a bright pink knee high pair. Alexander Wang’s collection for H&M, too, was full of grey-on-grey knee high compression socks. One very chic colleague will wear socks by Ashmei for her London Marathon. The high-end, niche running brand suggests serious nous on the starting line; it helps that the socks are the cheapest product in its range. For her marathon, Klien plans to wear neon yellow H&M menswear compression socks with black Nike running shorts. So if you suspect you might be running alongside a fashion editor this weekend, but you’re not quite sure, look down at their socks – the devil is in the detail.