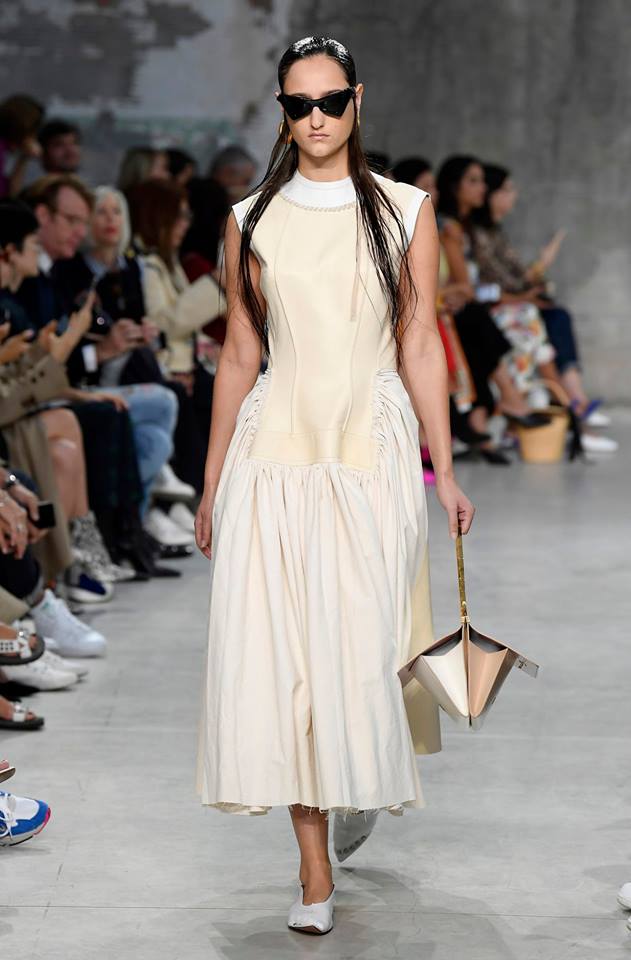 This article titled “The end of cleavage: how sexy clothes lost their allure” was written by Jess Cartner-Morley, for The Guardian on Tuesday 25th September 2018 15.59 UTC

The talent all great fashion designers have in common is the ability to read a room. You do not get into the history books by making pretty dresses. The best designers at any fashion week are the ones with a fingertip to the breeze, judging which way the wind is blowing. Like standup comics, they divine precisely how far they can push the audience out of their comfort zone to keep their attention without alienating them. And by sticking a pin in a map to illustrate where we are now, their clothes make us sit up and realise how fast the world around is spinning.

For decades, the mantra of Milan fashion week has been that sex sells. Paris does intellectual and chic, London does weird and innovative, New York does polished and commercial, and Milan does sex and glamour. Simple. But the impact of #MeToo, working in an unlikely pincer movement with the rise of the modest pound, as luxury fashion’s Middle Eastern customer base continues to outpace other markets, is pushing sexy dresses on to the wrong side of history. The ciabatta-e-burro of this city’s catwalks has gone stale.

Related: 10 of the key shows from Milan fashion week – in pictures

And so Milan is reinventing itself. After a few years during which she seemed to be edging out of the frame, Miuccia Prada, is back on form: profits are up, critics are raving. Introspection has never been big at Milan fashion week, but Prada is constantly questioning her own work and the world around her, poking around in the uncomfortable contradictions. “It was all about what’s happening in the world now,” she said after this show. “On the one hand, you wish for freedom, for liberation, for fantasy, and the other you have this extreme conservatism.” There were plunging necklines and short skirts on the catwalk, but the standout beauties were the prim looks that she has always made sublime: a grey sweater, a white shirt collar, a stiff satin skirt. Prada studied mime for five years in the 1960s, and recalled in W magazine recently her lessons with Etienne Decorum: “One day, he limited us to only moving our fingers – the body control was extreme.” She learned to say a lot, without making much noise; she does it on the catwalk still.

There are still unashamedly sexy clothes to be had, of course; 2018 is not The Handmaid’s Tale just yet, thank God. Take a stroll through any teen-orientated shopping centre and you will see cycling shorts and crop tops, high-cut hot pants, stretchy dresses with peekaboo cutouts. But look harder and you can see, particularly in the trajectory of how women out of their teen years dress, the ash-cloud that has settled over fashion in the wake of the #MeToo cultural volcano. It is not that sexy clothes are suddenly a bad thing. It’s that they no longer stand for something straightforwardly joyous.

The way we dress has changed already, in a shift that goes deeper than the seasonal ebb and flow. There is a consistent trajectory towards longer hemlines and looser clothes. Until a few years ago the standard skirt length in the average British office or cafe or railway station hovered somewhere a few inches above the knee. A skirt that fell to knee length was considered notably sober and modest. A choice you might make for a job interview, or to meet the in-laws. But look around you now and you will see a new standard hemline that finishes somewhere around the mid-calf. Knee length is now shorter than average, not longer. And what goes for legs goes for arms. Until a year or so ago I regularly got letters from readers who were at their wits end because they wanted a beautiful, special dress for a party or a wedding but they didn’t want to bare their arms. Celebration-wear, in fashion, generally meant bare arms and often bare shoulders. I get fewer and fewer of those pleas, because the offering of dresses-with-sleeves is markedly better.

And that’s not all. Perhaps the biggest shifts are that clothes have got looser, while heels have got lower. What links these is that both shift the weight of fashion away from being a vehicle for showcasing the body. Women are challenging the notion of being judged on, or valued by, their attractiveness, their availability. When you pick a pair of trainers over heels, you prioritise your comfort: what your body is to you, over what it means to someone else.

Back at Milan fashion week, at Roberto Cavalli, a brand once synonymous with in-your-face hotness, new-ish designer Paul Surridge has pared back the trademark vulgarity. There were long sleeves and ankle-length hemlines. There was one dress so short that it had model Yasmin Wijnaldum surreptitiously pulling it down over her hips as she approached the photographers to be sure she wasn’t flashing her knickers, a gesture that was once commonplace on the catwalk and that, I realised, as I clocked it, I hadn’t seen for ages simply because skirts are rarely so short, these days.

Salvatore Ferragamo, a name on the air this fashion week amid rumours of a possible sale, cast veteran models Stella Tennant (who also walked for Victoria Beckham), Karen Elson and Carolyn Murphy in a show that was all tasteful, low-key elegance. Model casting is about a brand choosing the women who represent its values, but it is also about buying airtime, about images that will get picked up and shared. A recalibration that is beginning to happen after a year of #MeToo is starting to bend the once cast-iron rule of fashion week, that a young supermodel in cleavage and a short skirt is the one and only route to maximising eyeballs. Missoni cast both Bella and Gigi Hadid in its dreamy 65th anniversary show – and dressed both of them in long cardigans. This recalibration away from banking on sexy pictures is backed up by the success of Gucci. Gucci has become a commercial giant and a hugely powerful aesthetic in directing high-street dressing. It is about energy and modernity and individuality. It is sometimes geeky, sometimes lavish, sometimes sporty, sometimes costumey. Sexy is the one look it never does. I don’t recall any fashion brand reaching the size Gucci is in fashion right now, while being so very deliberately not about sex.

Versace has just confirmed its sale to Michael Kors. (The business, not the man. Michael Kors, the designer, sold his label a decade ago. He remains as designer and honorary chairman, but owns a single-figure percentage of shares.) Donatella Versace will almost certainly remain as creative lead, but the transfer of bottom-line control across the Atlantic seems likely, eventually, to water down the Milanese essence of this most passionately Italian brand. The imminent sale would explain why this week’s Versace show was a relatively understated event, with Donatella keeping a low profile. On the catwalk, too, the sex was dialled down: there were boxy jackets, looser dresses and more trainers.

Certain looks that have their roots in the wardrobes of women who dress modestly for religious and cultural reasons have quietly become catwalk staples. Ever more evening gowns have sleeves. The slender, non-cling ankle-length trouser – worn alone, or under a dress – is everywhere. Giorgio Armani cuts them beautifully and does excellent business with them. But they turned up on other, quirkier catwalks too, this week at Marni.

Most visible of all is the headscarf. Halima Aden, who in 2017 became the first model to wear a headscarf in a mainstream catwalk show, was back on the MaxMara catwalk in a headscarf this week with, this time, a polka-dot trenchcoat. The reaction to Aden this week in comparison with her debut was instructive. Last year, she made the front pages; last week, no one blinked an eye. In the intervening year, the market opportunity for fashion targeting the “modest pound” has become clear. The Modist, an online luxury retailer specialising in modest fashion, has recently inked a deal with fashion giant Farfetch, which will be celebrated at a party during Paris fashion week this week. A year is a long time in fashion, especially when the world is changing this fast.