The Dior Autumn-Winter 2020-2021 collection by Maria Grazia Chiuri represented an embrace of influential feminist figures as viewed through the prism of fashion and art and the Creative Director’s own Italian adolescence, with a mixture of tweaked checks, luxury sportswear, soft silhouettes and innovative revisiting of House icons such as the Dior Book Tote. The show venue highlighted a collaboration with readymade collective artist Claire Fontaine, expressed in the illuminated feminist manifestos and newsprint floor installation. 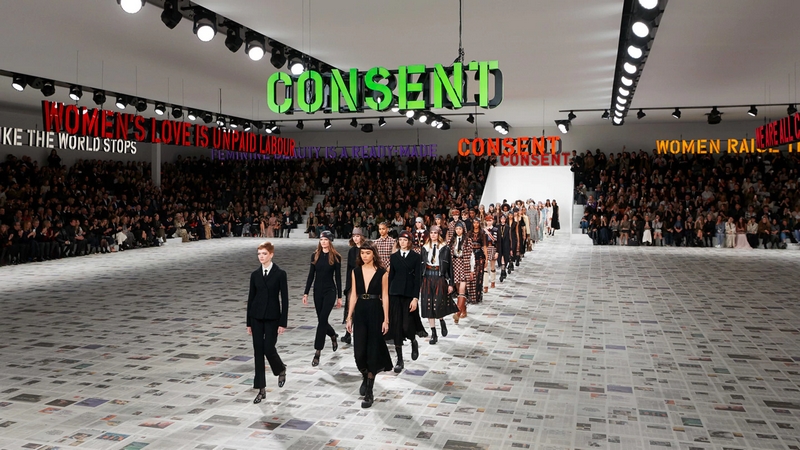 This article titled “Dior’s Tuileries show in Paris looks back to the spirit of the 1970s” was written by Jess Cartner-Morley in Paris, for The Guardian on Tuesday 25th February 2020 17.37 UTC

Because Christian Dior loved flowers and nature, he took the tulip as inspiration for his dress patterns and bottled the scent of lily of the valley as Diorissimo. But in the 21st century, the house he founded broadcasts its affections on a grander scale.

Dior has partnered with the Louvre Museum to finance a five-year restoration of the Tuileries Gardens. Financial details of the patronage have not been disclosed, but when Paris fashion week opens with the Dior name emblazoned on a temporary structure the size of a provincial railway station in the centre of one of the oldest and most elegant public parks in Paris it seems fair to assume a hefty sum is involved.

Fashion is now much bigger than mere clothes and Christian Dior, one of the most powerful brands of the moment, has both the ambition and the economic might to claim a seat at the table in conversations ranging from feminism to climate change. Along with stablemate Louis Vuitton, Dior was given credit by the luxury powerhouse LVMH for last year’s “exceptional growth”, when group revenue increased 16% to €38.4bn (£31.6bn) in the first nine months of 2019.

Cheekbones and champagne are no longer sufficient to dazzle catwalk audiences. Dior designer Maria Grazia Chiuri has adopted a much more sophisticated visual style, pitching the brand as conscious, engaged and value-driven – identities that appeal to modern consumers.

Dior’s show began with the word “consent” flashing in giant neon letters above the catwalk. On the day following Harvey Weinstein’s rape conviction, Chiuri said it was “an important word for now”

More illuminations read “Patriarchy kills love” and “Women’s love is unpaid labour” in a show space conceived as a collaboration with Claire Fontaine, an art collective who take neon signs, a symbol of the most direct form of commerce, and subvert them by unexpected juxtaposition. The Dior collaboration “revolves around the performative use of language typical of non-reformist feminism”, they explained.

Models walked on a catwalk papered with pages from Le Monde newspaper, a detail inspired by a 1949 portrait of Henri Matisse by the Hungarian photographer Robert Capa of the artist drawing in his studio, the floor papered with newspapers. Claire Fontaine adopted the newspapered floor as a symbol of how the noise of the outside world affects the world of art.

Backstage, Chiuri’s moodboard celebrated spirited women of the 1970s – from Bianca Jagger in a trouser suit to photos from the family album of the designer’s mother in a headscarf and flared jeans. The first model on to the catwalk had a pixie cut; others had scarves wrapped around their long hair. They wore Bianca Jagger trouser suits, Annie Hall waistcoats and baker boy caps, tank tops and flares, ponchos and fringing.

Backstage, Chiuri said the 1970s were “a time when women wanted to represent and be true to themselves, more than to fashion. As a woman designer, this is very important to me. Silhouette has always been central to Dior, because Christian Dior saw himself as an architectural designer. But one silhouette doesn’t work for all women.”

The first six outfits in the show – a trouser suit, a jumpsuit, a dress, and the midi-skirt-and-blazer combination that has become a staple of modern Dior – all came in stretch knit.

With its ornate carousels and genteel tree-lined avenues the Tuileries, first opened in 1564, is an icon of chic Parisian joie de vivre. Dior will finance several projects, beginning with the reopening of a wooded area home to 116 trees of four species. A Dior statement said the project showed a wish to be “an agent of change for the ecosystems of tomorrow, whether natural or cultural”.