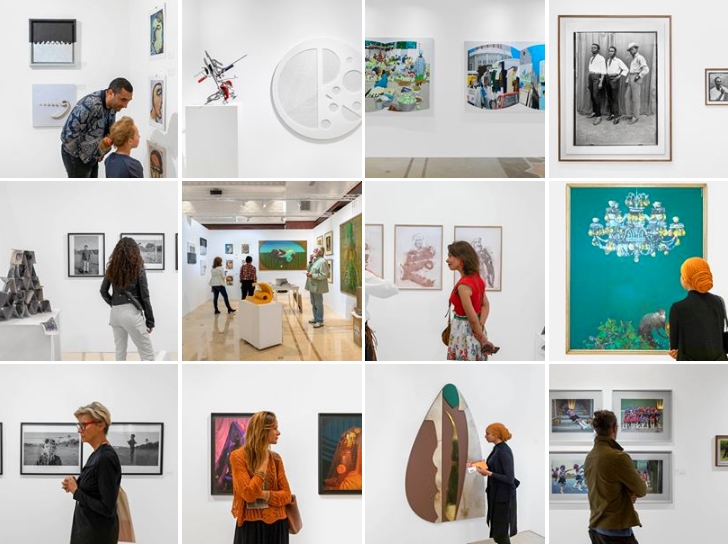 This article titled “Tate and MoMa ‘playing catch up’ in collections of modern African art” was written by Lanre Bakare in Marrakech, for The Guardian on Sunday 23rd February 2020 17.07 UTC

Major western culture institutions – including Tate and MoMA – are “playing catch up” to create truly global collections that recognise modern art from the Africa, according to the founder of an influential art fair devoted for contemporary African art.

Touria El Glaoui, the director and founder of 1-54, said that only in the last decade have institutions begun to take it seriously.

“At the Tate the collection was global but they were just missing an entire continent,” she said.

Asked whether major western art institutions were now trying to catch up by acquiring more African art, El Glaoui said: “One-hundred per cent,. They’re not even hiding it.” She said that trying to get their attention had been a “slow, gradual process”, but that their investment in contemporary works from Africa was crucial.

“We know when the Tate gets focused on something it brings more credibility and more gravitas to whichever part of the world they are focusing on,” said El Glaoui.

Maria Varnava, the director of Tiwani Contemporary, which specialises in art from Africa as well as artists from the African diaspora, said “an element of correction” was taking place at major institutions in order to develop “truly, honestly global collections”.

She cited the acquisitions Tate made in 2012, the founding of 1-54 in 2013, Sotheby’s move into contemporary African sales in 2016 and MoMA hiring the Nigerian curator Ugochukwu-Smooth C Nzewi in 2019 as examples of a “seismic shift” in the way modern African art was thought about and collected.

Varnava said there were fears that the rapid increase in interest was creating an market bubble, pointing to Russian and Indian art as previous examples of ephemeral markets. “A lot of people are talking about a bubble and what if this bursts? I don’t know, but I see longevity because artists from Africa are being very quickly incorporated into contemporary galleries and institutions,”

During the first half of 2019, sales were 11.3% lower than the same period in 2018. But El Glaoui dismissed this indicated a bubble. “It’s a moment of visibility that took time to develop,” she said.

Hannah O’Leary, the head of modern and contemporary African art at Sotheby’s, said that although artists from Africa were still “massively underrepresented” in the international market, she agreed that talk of a bubble was misplaced: “We just had a sale in October, which made the biggest overall sales total for a sale in this area worldwide – there’s a huge amount of growth still to come.”

El Glaoui refused to distance herself from Sindika Dokolo, the Congolese businessman and African art collector who sponsored 1-54 in its second year and has been embroiled in a corruption scandal after the Luanda leaks. “I prefer to take a neutral position on it,” she said. “I’m scared that this is being blown up because it is an African figure rather than an international figure – you hear these stories all the time.”

The Sindika Dokolo Foundation was the primary sponsor when 1-54 returned to Somerset House for its second year in 2014. El Ghaoui said she and her legal team had no reason at the time to doubt the source of the money, and that unlike Documenta – an event in Germany that also received funding from the foundation – she did not feel the need to distance herself from Dokolo, who has called the allegations a “political vendetta”.

“There’s always been strange things like that happening, even the Tate when you look where [Henry] Tate made his money,” she said. “It’s unfortunate but he’s not the only one who has a story that might turn negative.”

Since its launch in 2013, the 1-54 art fair now takes place in London, New York and Marrakech.