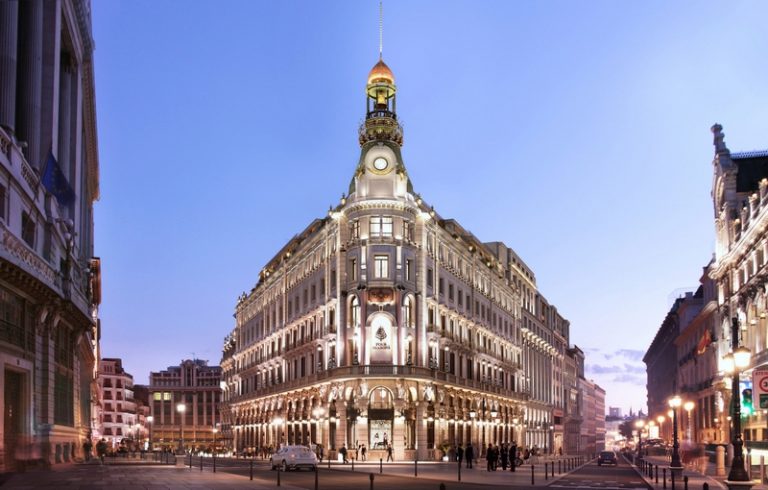 This article titled “A decade in the building, Madrid’s showpiece hotel has everything … except guests” was written by Sam Jones in Madrid and Stephen Burgen in Barcelona, for The Guardian on Tuesday 20th October 2020 12.56 UTC

Madrid’s first new grand hotel in almost half a century has more than enough to recommend it to even the most discerning and demanding of visitors.

As well as a presidential suite for VIPs and their bodyguards, there is a spa, a handy branch of Hermès, and a restaurant by the three Michelin-starred chef Dani García, whose rooftop terrace appears to float high above the busy streets of the city centre.

The only thing the Four Seasons lacks is guests. Its restaurant is doing well and the hotel’s elegant lobby is full of business types and well-heeled coffee drinkers, but only 50 of its 200 rooms have been made available since it opened at the end of September.

Like the rest of Spain, the hotel is watching and waiting to see what happens next with Covid-19 – and visitors.

“In 2019, Spain had 84 million tourists,” said Carlos Lamela, the architect whose firm spent almost a decade painstakingly converting the seven former bank buildings in the heart of the city into a hotel, luxury shopping centre and private residences. “This year, it’s about 20 million visitors. We don’t know what’s going to happen next year. It’s a question of just holding on.”

Lamela compared the challenges of the €600m Centro Canalejas project – such as excavating a car park for 400 vehicles and coming up with a way to drive corridors through different buildings on different levels – to marquetry or doing an enormous Rubik’s Cube.

None of these challenges, however, has come anywhere close to the difficulties thrown up by the pandemic. “I think we’re going to go through some very difficult times indeed over the coming months or even years,” he said.

The figures bear out his prognosis. According to the Hotel Business Association of Madrid, the occupancy rate throughout the Madrid region is about 15%. Those hotels that have reopened after the national lockdown are running with only 20-25% of their full staff, with the rest on furlough.

“The short- to medium-term outlook isn’t encouraging,” said a spokeswoman for the association. “There’s a great deal of uncertainty in the sector globally when it comes to international mobility and capacity. Even though the government has extended the temporary furlough scheme until 31 January, there’s no doubt that the hotel and tourist sector will continue to bear the brunt of this economic crisis.”

Jorge Marichal, head of the Spanish hotel owners association, Cehat, said the situation was bleak and the government needed to do more to help the tourist sector, which makes up about 12% of Spain’s GDP. “In terms of demand, the sector has practically come to a halt,” he said. “It needs shock measures to keep up liquidity and a rescue plan.”

Much would depend, he added, on whether some of the winter season in areas such as the Canary islands could be salvaged through safe travel corridors.

While the situation is looking dire for the hotel trade, Madrid’s bars and restaurants are still open despite the partial lockdown, and many outside terraces have been doing a brisk trade.

In Catalonia, however, bars and restaurants are limited to takeaway and delivery services until the end of the month, as the regional government seeks to slow the second wave of the virus.

Around 15% of Barcelona’s 9,000 bars and restaurants have been closed since lockdown in March, and Roger Pallarols, the president of the city’s restaurant association, estimated half could shut permanently within six to nine months if business did not improve soon.

Pallarols said the industry had been unfairly blamed for recent Covid outbreaks and argued that outbreaks were not produced in restaurants, where social distancing was enforced, but in private homes. He called for government help with rent and described the protection given to landlords as “scandalous”.

Juan Carlos Arriaga, marketing director of the Sagardi chain of Basque restaurants, said: “The government should have the guts to admit that restaurants are not the focus of Covid outbreaks. But it’s easier for them to blame us, even though we have taken all the necessary public health measures.”

One restaurateur complained that the furlough payment rules were especially stringent for the hospitality sector. In order to receive the funding they had to commit to employing staff for six months after they reopened, regardless of how the business fared. “If we take the second tranche of furlough money for a further six months and sack someone before the six months are up we have to repay all the 12 months’ furlough money for all our staff, which seems a little disproportionate,” she said.

Arriaga said: “Business is so slack we can’t afford to keep all our staff, but we’re not allowed to sack them either. It’s totally unviable but the government doesn’t want to see the unemployment figures rise.”

Up to now, restrictive measures have enjoyed widespread support but in a poll by the Catalan daily La Vanguardia of 80,000 readers found that barely a third supported the closure of bars and restaurants, suggesting the public was losing faith in the authorities’ ability to control the pandemic.

Back in Madrid, Lamela remained phlegmatic and hoped the Centro Canalejas would help coax money and visitors back to a corner of the city centre that has been neglected over recent years.

“Life will go on, and we’ll keep on adapting just as we have during other disasters and wars,” he said. “It’s like Churchill said – blood, sweat and tears. It may take a while, but this will all go away.”