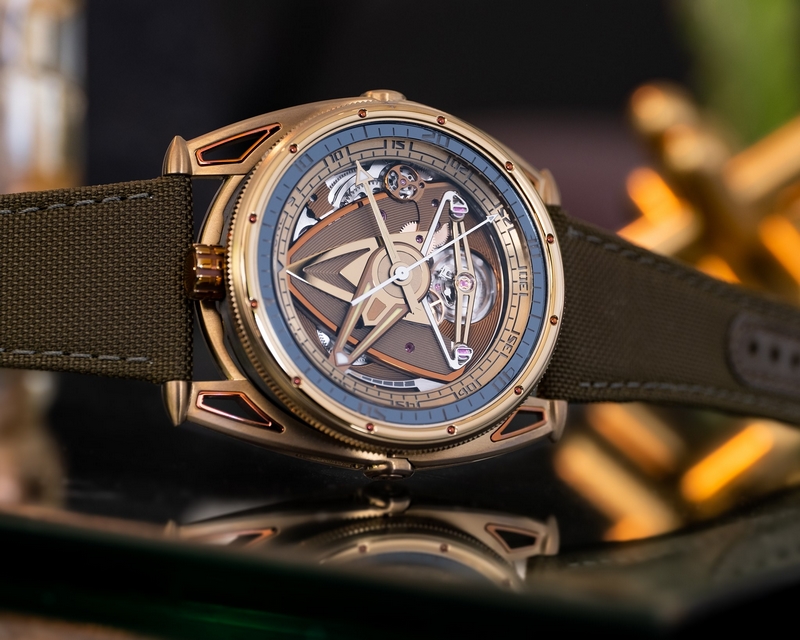 Available in a limited edition of 25 pieces, De Bethune DB28GS Yellow Submarine dive watch is a beautiful combination of water and fire, coming with a $110,000 price tag. Hand-wound, with central seconds and a five-day power reserve indicated on the dial, the movement is equipped with a state-of-the-art in-house-made balance wheel.

A sports watch, designed for diving, dipped in fire.

True as ever to the natural colours of the four elements – sky, water, earth and fire – De Bethune has developed in 2019 a warm colored titanium (as opposed to the cool colour of blue) with natural shades of amber and flame blonde, reflecting the colours of fire, sun, warmth and luxuriance.

To create its own fiery, radical, magnetic yellow, De Bethune applies its famous technique of gently oxidising grade 5 titanium to tint its surface naturally. This ritual conjures an extraordinary, rare and uniform fire brown. This know-how is applied to the case components and to most of the movement’s components. Each element is thus individually examined to ensure the process is properly calibrated to suit shape and mass. This preliminary step is essential to obtain in the end a range of uniform tones. 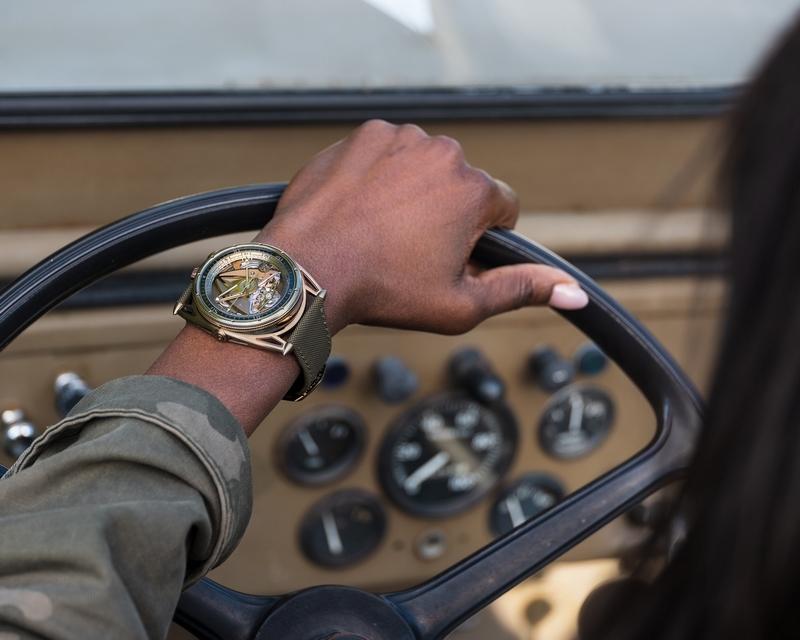 A light source at the heart of the watch. Produced mechanically. Available on demand.

The DB28GS “Yellow Submarine” was designed and developed to be a resolutely sporty watch. Based on the observation that a sports watch must be perfectly readable in any kind of weather and every possible situation, a very special and ingenious lighting system has been developed.

To illuminate the watch and the movement from the inside, a light source is produced by a fully mechanical means that works on the dynamo principle. Visually as simple as the lighting of a bicycle, fully mechanical with no electronics and no battery…but in truth just as complicated as the timbre of a minute repeater… A pusher located at 6 o’clock activates a small gear train driven by the twin barrel. This gear train, by means of a miniature dynamo, provides the necessary energy for lighting the watch. A few seconds of light is more than enough to read the time, even in the middle of the night or in the abyssal depths of the ocean.

A bezel that rotates the crystal

The rotating bezel made its first appearance in watchmaking in 1952. It serves to enable accurate calculation of immersion time, as well as the transition through various decompression stops. of the different levels. Generally, all the numerals relating to the minutes counter are indicated on the bezel, which tends to create a more crowded visual effect. For the DB28GS “Yellow Submarine”, these indications appear on the sapphire crystal driven by the bezel. This developed in the workshops of the Manufacture in L’Auberson enables the model to remain elegantly slender and instils a pleasing casual chic aesthetic. 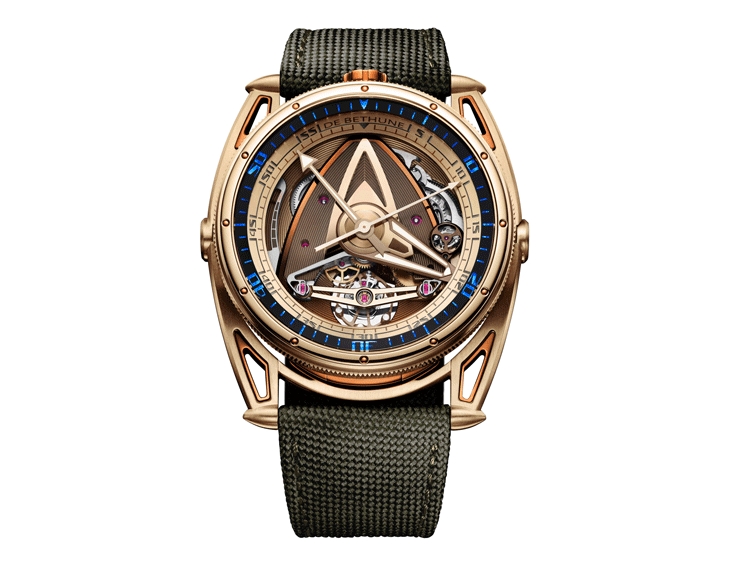 Water-resistant to 105 metres (10 ATM), the DB28GS “Yellow Submarine” is no exception to the strict rule of wearer comfort that De Bethune applies to its models in general and particularly to the DB28 collection. This exceptional comfort stems from a combination of the light feel of the titanium case, the softness of its hand-polished finish, the 12 o’clock crown position and above all the presence of the patented system of floating lugs that adapt to wrist size and movements.

The model is delivered with two straps: a canvas version and a striated natural rubber iteration with titanium folding clasp, which also contributes to the practical and pleasant wearer comfort of this timepiece. 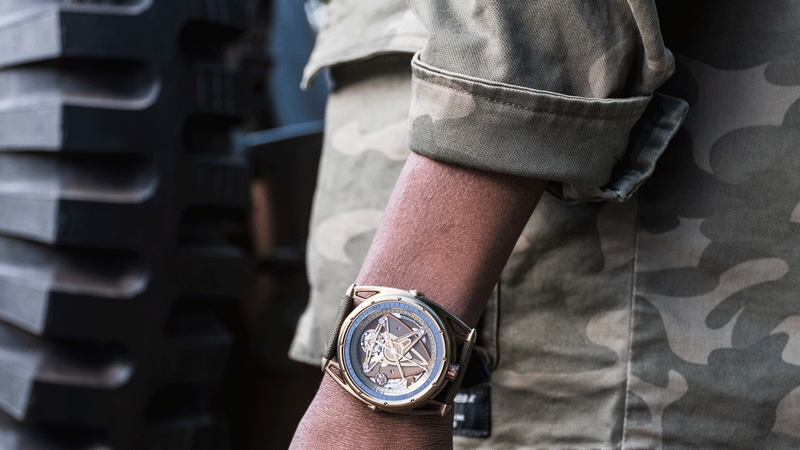 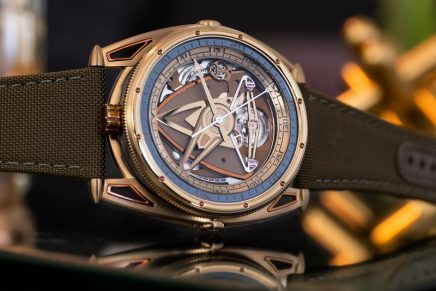 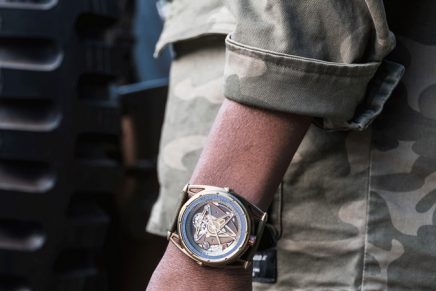 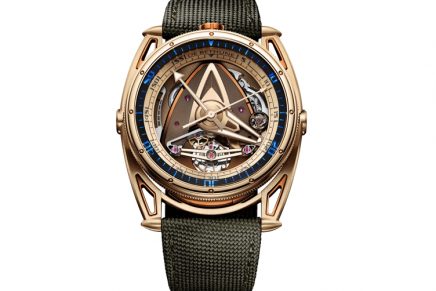 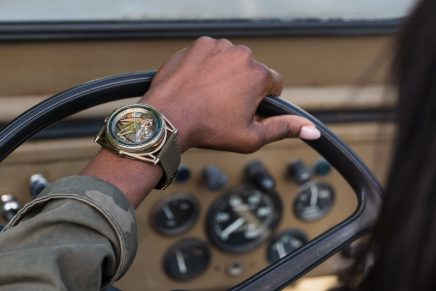