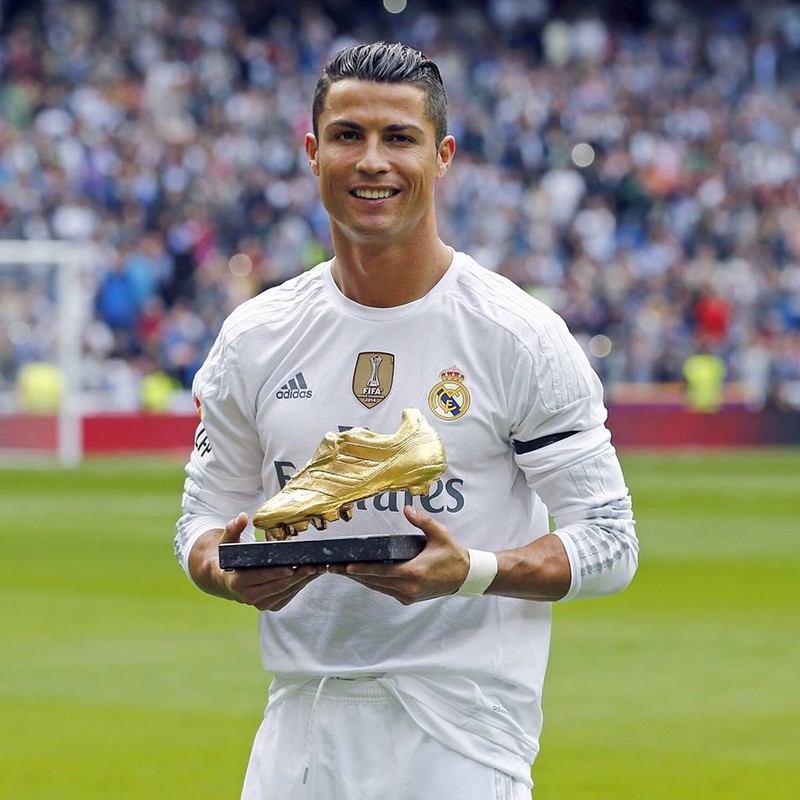 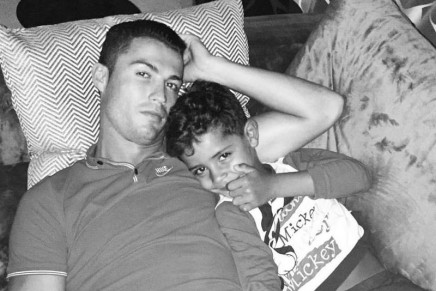 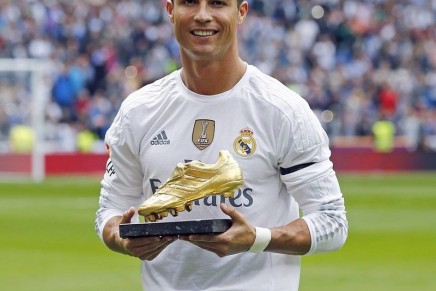 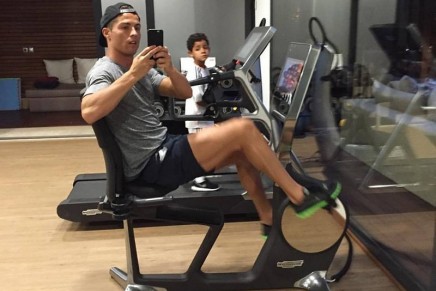 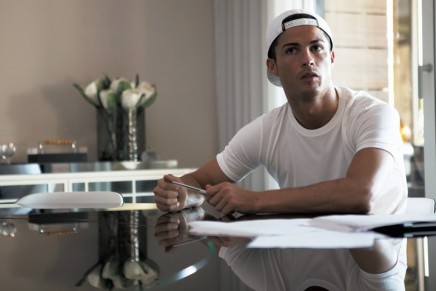 This article titled “Cristiano Ronaldo film captures giant ego and strange, lonely world of being CR7” was written by Daniel Taylor, for The Guardian on Thursday 5th November 2015 14.07 UTC

As a snapshot of what life must be like for Cristiano Ronaldo, there is one clip in the new film Ronaldo when his godson is being baptised and there is a small gathering around the font. The baby’s head has just been wet when the priest looks over to the tanned guy with the gelled hair and whips out a mobile phone. “Any chance of a quick selfie?” he wants to know.

Then there is the moment Portugal’s team are training at Estádio Moisés Lucarelli in São Paulo during the last World Cup and a sobbing girl breaks the cordon to run across the pitch in a desperate attempt to reach her hero. She is shaking, crying, close to hysteria and caught by one of the security guards. It is The Beatles at Shea Stadium all over again. Ronaldo hugs her and she looks as if she might pass out. “He knows I exist,” she wails, when a television reporter stops her a few moments later. What did he say? “He asked me to stay calm and stop crying.” And what did you say back? “I asked him to follow me on Twitter.”

It must be suffocating at times even if, for the most part, Ronaldo gives the impression that fame is his comfort blanket. The film is a remarkable vanity project and, even more than before, it is difficult not to come away with the feeling that Ronaldo must shout his own name during sex. He and his agent, Jorge Mendes, appear to have a relationship of mutual worship. Mendes, Ronaldo says, is “the best, the Cristiano Ronaldo of agents” and it is difficult to keep count of the number of times they get lost in each other’s eyes, reminding one another of their success and wealth and shiny brilliance.

Mendes – sharp black suit, Rolex, phone almost permanently to his ear – seems almost as hung up about Ronaldo winning the Ballon d’Or as CR7 himself. It is a 24-7, twitching obsession, on both their parts, given far more relevance throughout the film than Real Madrid’s Décima or anything else, and it is a telling moment when Mendes and one of his associates can be heard muttering darkly from one of the Bernabéu’s executive boxes about the possibility “the other guy might destroy everything”.

That other guy is Lionel Messi, cast in a slightly villainous Ivan Drago-style role that he probably does not deserve. “It’s a card inside an envelope that can change so much,” Ronaldo says of the Ballon d’Or, describing what it is like being expected to fake a smile on behalf of his old adversary. “To see Messi win four in a row was difficult for me. After he won the second and third I thought to myself: ‘I’m not coming here again.’” Watching this film, it becomes clear just how difficult it must be for Gareth Bale, signing for Madrid as the most expensive player in history, to deal with that planet-sized ego.

Other scenes are strategically laced with soft-focus Hello! magazine-style moments where Ronaldo can be seen playing with his son, Cristiano Jr, or dropping him off at school, but there is not always a great deal of charm elsewhere. Muhammad Ali and Brian Clough had great humour to go with all the braggadocio. Ronaldo’s style is not so attractive. “I’m not going to lie to you,” he says, explaining why he went to the World Cup with an injury. “If we had two or three Cristiano Ronaldos in the team I would feel more comfortable. But we don’t.”

A touch of humility every now and then would make Ronaldo much more appealing. Equally, he is as good as he is because of the way he is and a documentary of this nature, filmed over 14 months in his company, does show the enormous strains that come with the territory.

At one point his mother, Dolores, is filmed inside a chemist’s handing in a prescription for sedatives because she can barely take the stress of watching him play. Ronaldo rings and asks if she has taken her tranquillisers yet, as if he is quite used to it. “Its quite complicated to be the mother of a player who needs to win,” Dolores explains. “I suffer a lot.” When he is playing in the World Cup she asks for her flip-flops and then walks up the hill rather than watch with the rest of the family.

It is this insight into the inner circle that reminds us it has not been straightforward for Ronaldo, and not just because of the fact he left his family in Madeira at the age of 12 to join Sporting Lisbon, with his first pimples on his forehead and braces on his teeth. Hugo, his older brother, now runs Museu CR7, the Ronaldo museum, in Funchal but, at 20, was spiralling into alcoholism. Hugo says it could have been him who played football. Instead, he worked in construction, and he says everyone drank in that game, particularly as he was used to seeing his father, Dinis, knocking it back every night. It isn’t in the film but Dinis and Hugo resorted to selling Ronaldo’s Manchester United shirts so they could pay for more booze.

Dinis, we learn, was never the same after being called up to fight in the Portuguese colonial war in Angola. He came back “very angry”, Dolores explains. His head was filled with images of the war and though she says he always cared for his children she also says she became “his victim”. Dinis drank himself into an early grave, dying in 2005 when Ronaldo was 19. “He was drunk nearly every day and when that happens it became hard to have a conversation,” his younger son recalls. “I didn’t get to know my father for real.”

As for Cristiano Jr, possibly the star of the film, Ronaldo explains that he always wanted “my successor” without going into any other details. His son is five, already doing sit-ups and still working on his pronunciation of “Lamborghini”, and Dolores takes care of him while Ronaldo is away. The mother? It’s anyone’s guess. “People speculate that it was with this girl or the other or a surrogate mother,” Ronaldo says. “I’ve never told anybody and I never will.” How a man in his position has managed to keep it secret is remarkable and, unorthodox as it might be, fair play to him.

These parts are fascinating and, at times, Ronaldo comes across as so lonely it is a good job he enjoys his own company so much. “In football I don’t have a lot of friends. People I really trust? Not many. Most of the time I’m alone. I consider myself an isolated person.” It pains him that his father is not around to see his success but Mendes, he says, is like a father and a brother rolled into one. In Guillem Balagué’s new book about Ronaldo he writes how, to feed the competitive beast, the player’s entourage quickly came to realise “they must keep criticism at a distance, or control it, create the narrative and keep him on his pedestal”. Mendes is always there to fluff that ego and tell him he is better than Messi, and everybody else. It is far more than just the usual player-agent relationship.

Here, too, is the revelation that there was very nearly no Cristiano Ronaldo either. “He was an unwanted child,” Dolores explains. She considered an abortion and, on a neighbour’s advice, drank boiled black beer before running until she was on the verge of fainting, hoping to force a miscarriage. It didn’t work – and she seems pretty happy about that.

Thirty years on, the film – released on Monday and put together by the people behind Senna – does at least help us understand Ronaldo some more and the incredible drive that is needed to reach the top of his profession. It is not Ronaldo’s talent that stands out the most. It is his competitive courage, his absolute refusal to believe anyone can possibly outdo him and a level of self-obsession that makes one wonder how he will cope now he is approaching the age – two years older than Messi – when the powers gradually start to decline.

In recent years, he says, he and Messi have started talking to one another in a way they never did previously, asking about each other’s families and other polite small-talk. “I’ve started seeing him as a person, not a rival,” he says. “But we are always busting our balls to see who is better.”