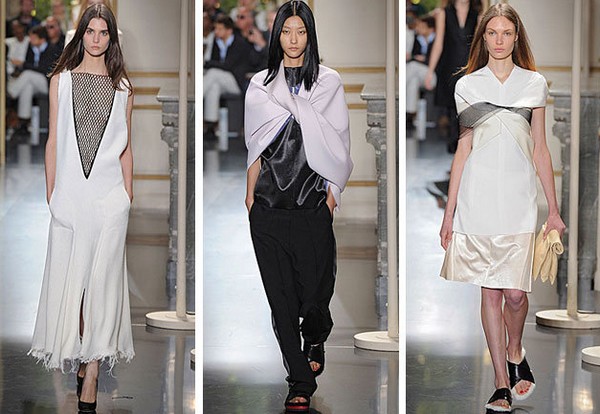 This article titled “Céline steers towards surrealism at Paris fashion week” was written by Jess Cartner-Morley, for The Guardian on Sunday 30th September 2012 14.34 UTC

The headline act of this Paris fashion week has been billed as a duel but it should more accurately be seen as a battle royale, with three contestants rather than two.

The head-to-head debuts of minimalist designers Raf Simons at Christian Dior and Hedi Slimane at YSL may be monopolising the airwaves, but there is a third major player in this game: Phoebe Philo, the British designer of the house of Céline.

Arguably neither Simons nor Slimane would be staging catwalk shows in Paris this weekend if it hadn’t been for Philo.

Philo,39, is the woman who put minimalism back in the mainstream. In four years she has taken Céline from a position of irrelevance to a name held in almost reverential awe in the industry.

Her understated yet arrestingly different aesthetic – clean lines and a restrained chic, where opulence and decoration had ruled – has guided the eye of a generation of women in a new direction. It is in the slipstream of her success that Simons and Slimane were appointed by luxury labels newly converted to the selling power of minimalism.

But two days after Raf Simons declared he was bringing sexy back to minimalism, Céline took an unexpected turn, away from the mainstream chic she has shaped and towards surrealism. Flat sandals and court shoes were lined inside and out with shaggy fur in bright primary colours with an unsettling effect, as one observer pointed out on Twitter, a little like Meret Oppenheim’s fur teacup and saucer.

The sleek polo neck sweaters and sharp tailoring of recent seasons were replaced by more challenging shapes: jackets flared from an exaggerated high waist, while trousers were flared and cropped above the ankle, or pooled to the floor.

The elegant trouser is a touchstone at Céline, as a shopfloor staple and as a statement about the modern, dynamic woman who identifies with the label. In this collection for Spring 2013 the trousers were as unimpeachably elegant as ever, but neither the cropped judo-style nor the extra level of slouch in the loose pyjama styling had quite the bite of the sporty racing-stripe versions of previous seasons.

The handbag – golden goose of any modern luxury house – was kept well protected from any perception of “un-mainstreaming”. Simple pouches with folded tops are a brilliantly simple Céline statement: the luxury of a clutch bag meets the practicality of a document folder. These were much in evidence on the catwalk, in pretty shades of butterscotch and duck-egg blue as well as in the neutrals which dominated the clothes.

The show was the first full-scale Céline catwalk production in a year. The last Paris fashion week fell when Philo was heavily pregnant with her third child, and that show was scaled back to a much smaller presentation.

Backstage after this show, Philo defined the collection as being about “beauty and friendship”. Owing to the arrival of her baby, this collection had been very much a joint effort with her team, she said. “It felt like a journey. It has been about supporting each other and being kind to each other.” How exactly this related to raw-edged silks and primary-hued furs, she declined to say.