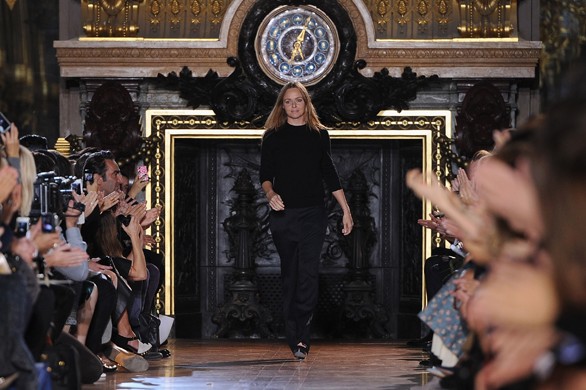 High speed rail link notwithstanding, Paris fashion week still feels a long way from the Olympic village. After a triumphant summer of leotards and Lycra, Stella McCartney returned to her day job on Monday, parading her newest collection on a catwalk at one of her favourite venues, the Palais Garnier opera house.

The Palais Garnier is a lavish cathedral to art, beauty and the sport of social vanity. Architect Charles Garnier pioneered the use of red and gold interiors, rather than the traditional pink and blue: it is said that he did so specifically to enhance the experience of an evening at the opera, because the colour scheme is more flattering to the complexion and a better foil for jewellery. As if to underline the Parisian and distinctly unathletic tone of the event, cafe au lait and miniature pains au chocolat were served to guests as they arrived.

But the Olympic legacy was to make itself felt even here. First, there was the presence in the best seats of the Team GB star trio of Victoria Pendleton, Ellie Simmonds and Louis Smith, a significant post-Olympic addition to the front row roll call of the beautiful, the cool and the glamorous, led as always by Kate Moss. Second, it was noticeable that Sir Paul McCartney, who rarely misses his daughter’s catwalk shows, was less besieged by photographers than usual. The great summer of London 2012 has overtaken the Beatle connection in the story of Stella’s brand, it seems.

The clothes had an ease and a freedom of movement which suggested an unwillingness to return from a summer of sport to the painstakingly constructed and narrowly defined aesthetic of catwalk beauty. The sculptured shapes of last season made way for fabrics which allowed the rippling movement of the body beneath to define the wearer’s silhouette.

For daytime, this meant micro-plisse pleating, the tiny zigzag folds of which concertina to subtly expand and contract so that the body creates the shape of the garment rather than being imprisoned by set-in-stone measurements.

For evening, silk organza was cut on the bias, a technique which emphasises the sway and roll of the hips instead of constricting them into a wiggle. This new looseness of stride was emphasised by the shoes, which were flat or low-heeled. “Optimistic” was McCartney’s timely word for the colours: apple green and Tropicana orange, a naive contrast to the rich, painterly blue of last season.

But fashion being six months ahead, the Olympics is last year’s news already, and McCartney dismissed the reference. The sporty references, she pointed out, are always in her collection –”that’s part of who she is, the woman I dress”. Instead, she said she conceived the show as “about conversation between a man and a woman. I wanted to capture that dialogue between the masculine and the feminine, the boldness and directness of that, and also the fragility of it.” What this meant on the catwalk was outfits which each held within them a quirk or contradiction. Some outfits had a different pattern on the back view from that on the front. Very bold, flag-like arcs of colour were used on ultra-delicate skeins of silk rib; a fitted bustier top was worn over slouchy cropped trousers.

Contrast is at the heart of the Stella McCartney brand. The lifestyle she sells is about glamour with a work ethic; integrity with a sense of humour; London with a splash of Paris. This was not an Olympic-influenced show, but – much better, this – a collection from a Brit with a post-Olympic spring in her step.

But even headline-makers such as McCartney are mere sideshows this Paris fashion week. All eyes are trained now on Yves Saint Laurent, as the house prepares for the first show by new designer Hedi Slimane. Rave reviews garnered by the rival house of Dior for that label’s first show by Raf Simons have increased the pressure. Interest has been piqued still further by the intense secrecy surrounding all aspects of Slimane’s new look for the house.

It was revealed last week that a new-look Yves Saint Laurent website will be unveiled a few hours after the show on Tuesday, extending Slimane’s artistic control into the digital role. For now, fashion industry insiders have only one clue to study. The invitation to the show at the Grand Palais is a black notebook, each page of which is printed with a different close-up image of leopard print fabric.