With a packed saleroom, the TCM Presents…There’s No Place Like Hollywood auction at Bonhams New York lived up to expectations, selling almost 90% of its lots by value, and fetching $9.1 million in sales. Highlights from the evening included item from the classic wartime drama, Casablanca (1942). The painted upright piano from Rick’s Café Américain in “Casablanca” (1942) was among the items sold at Bonhams.

The salmon-colored piano on which Dooley Wilson plays, “As Time Goes By“, and in which Humphrey Bogart hides the precious transit papers fetched $3,413,000.

Sam’s piano is central to both the plot and the overall mood of Casablanca. Many of the major plot machinations take place on or near the piano, and Sam’s tasteful melodies frame every scene in Rick’s. We hear the strains of “It Had to Be You” as we first enter Rick’s Café Américain, following the camera past Sam (Dooley Wilson) leading the big band, and then focusing on the variously desperate European refugees who haunt the cafe. It’s Rick’s place, but Sam is the star attraction (earning 10% of the profits, we later learn), and his music dominates the room. Moments after the oily Ugarte (Peter Lorre) gives Rick (Humphrey Bogart) the transit papers to hold, Sam leads the cafe in a boisterous rendition of the novelty tune, “Knock on Wood.” In the middle of this performance, Rick casually walks up to the piano, opens the lid from the rear and slides the stolen transit papers inside. 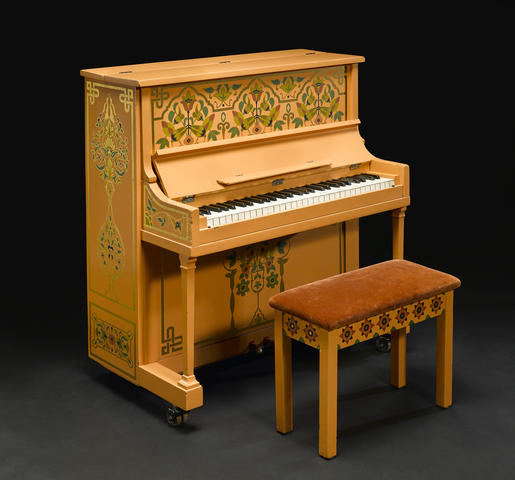 What sets this piano apart from the other–aside from the fact that appears throughout the film, rather than in a single flashback–is that the lid has been altered to accommodate a pivotal plot point. Even in the stage version, Everybody Comes to Rick’s, the piano was always the hiding point for Ugarte’s transit papers. In the film, however, the writers come up with the clever “misdirect” of having Rick hide them in plain sight of the entire room by depositing the papers quickly under the lid of the upright as Sam plays. The only way this works, however, is if the lid opens from the rear: otherwise Rick would have to reach over Sam’s shoulder to hide the papers, a hardly subtle move. The solution to this staging problem was to have the prop department completely remove the top of the piano, leaving the piece secured by a hook and eye only.

The other piano from Casablanca, which appears onscreen briefly in the Parisian flashback sequence, sold most recently at auction in 2012. The present piano, Sam’s piano, has never sold at auction before, though it does have a long exhibition and publication history

On the success of the auction, Dr. Catherine Williamson, Director of Entertainment Memorabilia at Bonhams, says, “Our second auction with Turner Classic Movies further proves the appeal of iconic films from both past and present. Key props, costumes, and scripts from films of all eras continue to reach new heights at auction and we were very pleased to present this fantastic selection of memorabilia to fans the world over.”