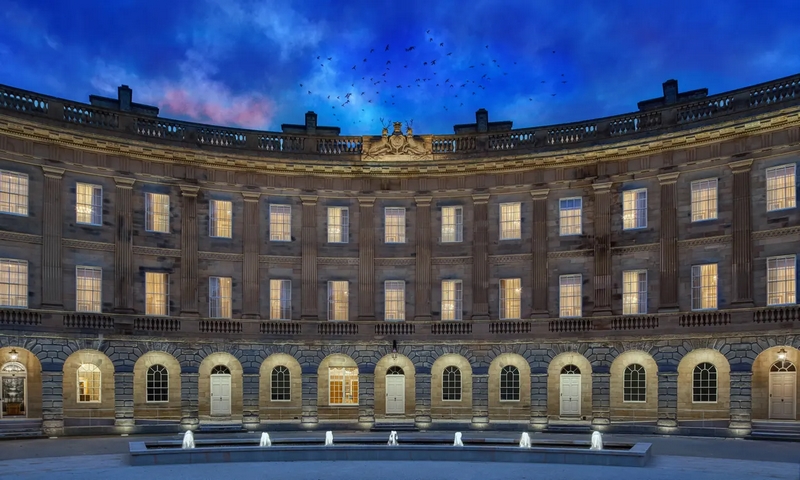 This article titled “Buxton Crescent review: the grand old spa and hotel comes back to life” was written by Kate Leahy, for theguardian.com on Monday 12th October 2020 05.30 UTC

Whichever direction you arrive from, the drive to the Buxton Crescent Health Spa Hotel will almost certainly involve winding through a glorious stretch of the Peak District national park. On my route from the south, I passed herds of grazing cattle fenced in by a pretty zig-zag of dry stone walls. Above them low-hanging clouds were already threatening rain. I had come to Derbyshire for the water, just not that kind.

My visit was to test the natural warm springs, first harnessed by the Romans around 2000 years ago and later by the Georgians and Victorians. For two centuries, visitors came to Buxton for curative dips which promised to help with the likes of gout, rheumatism and sciatica.

Originally housing two hotels above the thermal waters, the Grade I-listed curved terraced was built with locally quarried gritstone in the 1780s by the Fifth Duke of Devonshire and designed by architect John Carr, who looked to Bath’s Royal Crescent for inspiration. (As the only two spa towns in Britain built by the Romans, Buxton and Bath’s rivalry goes way back). The town attracted many generations of the wealthy and infirm, but spa treatments fell out of favour in the 1940s with the growth of modern medicine and the NHS, and the building fell into disrepair and closed in the mid-1980s.

Having finally reopened as an 81-room hotel and spa at the beginning of the month after a 17-year, £70 million renovation, does the Crescent still have pulling power? The short answer is yes. Despite opening in the middle of a pandemic and to overnight guests only (no spa day visitors are yet allowed), the hotel has seen a surge in bookings, I’m told, with some nights already fully booked. On my visit, the crowd was classic Buxton: a mix of retirees and locals who have been champing at the bit to see how the hotel has been revamped. But the hope is that the spa will bring a new, younger visitor to historic Buxton, giving the town itself a much needed rejuvenation.

In the spa, which includes the original thermal pool surrounded by Victorian cast-iron pillars, a new stained-glass dome casts a warm light across water naturally heated to 27.5C. (The pool is drained, cleaned and refilled daily.) Nearby, there’s a relaxation pool beneath twinkling mood lights and upstairs an indoor/outdoor hydrotherapy pool. A good tip for those staying more than one night is to visit the spa around 11am when other guests are checking out – you’ll have it pretty much to yourself.

Elsewhere, there’s a salt cave (good for respiration), three saunas (Finnish, biothermal and infrared) and two steam rooms (traditional and aroma) that have just reopened for bubble or solo bookings. Treatments include therapeutic options such as a CO2 mineral bath to aid circulation, an underwater jet massage for reducing tension, and a therapeutic hot mud bath said to be great for aching joints.

At check-in, the strict Covid-policy was reassuring. Masks have to be worn in all the hotel and spa public spaces (the only exceptions are when dining, in the bar or bathing in the pool). There’s a test-and trace check-in point and sanitisers at every turn. Staff don’t enter bedrooms (unless it’s for a turndown) and final flourishes such as scatter cushions, throws and mini bars have been left out for now.

In the loft rooms, wooden beams add a homely warmth, and freestanding baths sit in windows under the eaves, overlooking the stone balustrade. Downstairs bedrooms have high ceilings, large sash windows and, for a bit of zhoosh, twinkly chandeliers. There’s no double glazing and you can hear the odd patter above but few will have trouble sleeping in the impressively comfortable beds.

The only negative was in the restaurant. I enjoyed a dinner of leek and potato soup, lemon sole with new potatoes, and Eton mess – all excellent. But while the staff are lovely, there were a few problems with the service which need to be smoothed out. At breakfast I overheard numerous complaints over waiting times and small details, such as offering a choice of tea. .

Beyond the hotel, walks in the Peaks are easily reachable: the seven-mile Shining Tor and Goyt Valley circular route starts at the Erwood Reserve, a 10-minute driveaway. Closer to the hotel are views across the town, the 19th-century Pavilion Gardens, and a free drop of Buxton water at St Anne’s natural spring well.

In the middle of a global health crisis, it’s a brave move to launch an expensive and long-awaited project such as this, especially one where the star attraction is a communal spa. But it could actually be an ingenious move. Intricate safety measures and smaller crowds mean teething problems should be ironed out by the time the people descend in greater numbers post-pandemic for a much-needed tonic.

• Accommodation was provided by Ensana Hotels, which has doubles from £125 B&B, one-hour massages start at £70

• Wildlife spotting
In England, mountain hares can be found only on three of the Peak District’s hills. They can be spotted all year round but winter is a particularly good time, when their coat turns from golden brown to white. I take groups or private guests to see them on a five-mile circular walk across the rugged moorland.

• Scenic trail
The 13km Monsal Trail is a popular surfaced former railway line following the River Wye and good for either walking or cycling. It starts in Blackwell Mill, 15 minutes’s drive from the Crescentand ends at a viaduct overlooking the valley a short walk from the Monsal Head hotel, with its Stable Bar. Blackwell Mill Cycle Hire has bikes from £17 a day.

Discover Buxton runs historical tours of the town in a Victorian-style mini tram, and the owner is currently trialling popularity for winter excursions. It has to be booked privately, by families and “social bubbles” (£80, up eight people) and guests are invited to bring their own blankets or hot water bottles (usually supplied).

• Caves and temples
Pooles Cavern, an easy 20-minute walk from the Crescent, is one of the UK’s best show caves, layered in stalactites and stalagmites. Covid-friendly tours cost £11 adult, £5.50 child (booking essential). Just behind it, a woodland path leads to Solomon’s Temple, a 19th-century folly with views over the peaks’ highest point, Kinder Scout.

• Fine dining
A short walk from the Crescent, Columbine Restaurant is in a pretty Georgian house with three small dining rooms, including one in the cellar. Food is locally sourced and served by husband and wife team Steve and Kim McNally(mains from £14.50). My personal favourite was the pan-fried High Peak lamb cutlets.