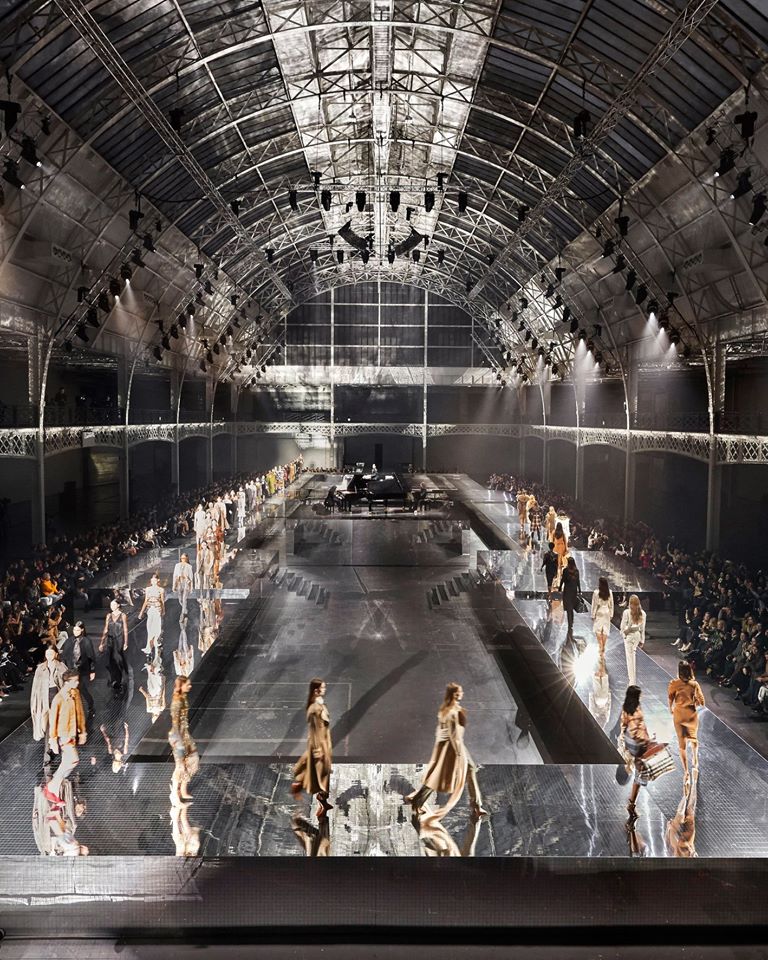 The finale of the #BurberryAutumnWinter20 show, titled ‘Memories’. Set in West London, models walked a raised mirror runway to a unique performance by Arca and classical duo Katia and Marielle Labèque; @burberry

“London is the place where I learned to be myself and a city where I gained the confidence to be the man that I am today,” said Riccardo Tisci, the chief creative officer of Burberry, before his London fashion week show on Monday. “Now I want to share British style with the world and use this incredible heritage to build and humanise the house.”

Burberry, British luxury fashion’s marquee name, could use a boost in morale. London is Burberry’s home, but its commercial heartbeat is now in Asia. With Chinese customers accounting for 40% of Burberry revenues, the brand is one of those that has been hit hardest by the economic impact of coronavirus.

Related: In the trenches: Riccardo Tisci on his new era at Burberry

With a troupe of expensive supermodels, Tisci’s fourth season at Burberry was a slick cheerleading routine for the blue-blooded glamour that flows through the label’s veins. In the Victorian pomp of Kensington Olympia, where the iron ribs spanning the vaulted ceiling soar above the mirrored catwalk like the skeleton of a blue whale, a grand piano was the centrepiece for a dressage parade of modern equestrian chic. This season’s look was a more globally bankable take on Burberry than Tisci’s punk- and rave-referencing, subculture-themed collections of last year.

Tisci has made Burberry sexy where his predecessor Christopher Bailey made it romantic. His equestrian silhouette owed as much to Jilly Cooper as to the Grand National. Gigi Hadid wore high, tight jodhpurs tucked into glossy boots. Blazers had nipped waists, and trenchcoats were reinvented as slippery satin dresses with multiple unfastenings. The Victorian architecture of the venue was echoed in corsetry outlines on evening wear, while quilted nylon stable-hand jackets looked a strong commercial offer for the more street-orientated Burberry customer. This was a collection tailored to helping Burberry weather the current economic storm.

More than a third of the label’s 64 stores in mainland China have been closed since the coronavirus outbreak hit the region. This month, the company’s chief executive, Marco Gobbetti, acknowledged the material negative effect of the outbreak on luxury demand. It is a further blow to Burberry, already hit hard by the effect on retail of anti-government protests in Hong Kong, where its sales in the final quarter of 2019 were down 50% on the previous year.

This London fashion week show had been scheduled to be reprised in Shanghai, on 23 April, at an event for Chinese press, influencers and clients that would have featured the same clothes alongside exclusive additional looks for Chinese Burberry customers. When the Shanghai show was announced, Tisci described China as “a country that has always been so supportive of me” and Shanghai as “one of the most innovative and inspiring cities in the world”. The event has been postponed indefinitely.

At the day’s earlier shows by Erdem and at JW Anderson, the 1920s made a comeback. Shawl-collared tuxedos of the roaring 20s inspired the wing-collared padded coats at JW Anderson, which he called “nouveau chic”.

Erdem, whose modernist flamboyant gowns are a feature of the art-fair social scene, worked with Robin Muir, the curator of the National Portrait Gallery’s upcoming exhibition about Cecil Beaton, to develop themes from the exhibition on his catwalk.

“Beaton was truly experimental – so much more than a society photographer,” said Erdem backstage in front of a mood board showing the teenage Beaton’s early stage sets in which he dressed up his sisters and himself in 20s gowns against makeshift backdrops. On the catwalk, Beaton’s own leopard-print dressing gown became a camel coat embroidered with seed pearls clustered into tiny paw-print motifs.