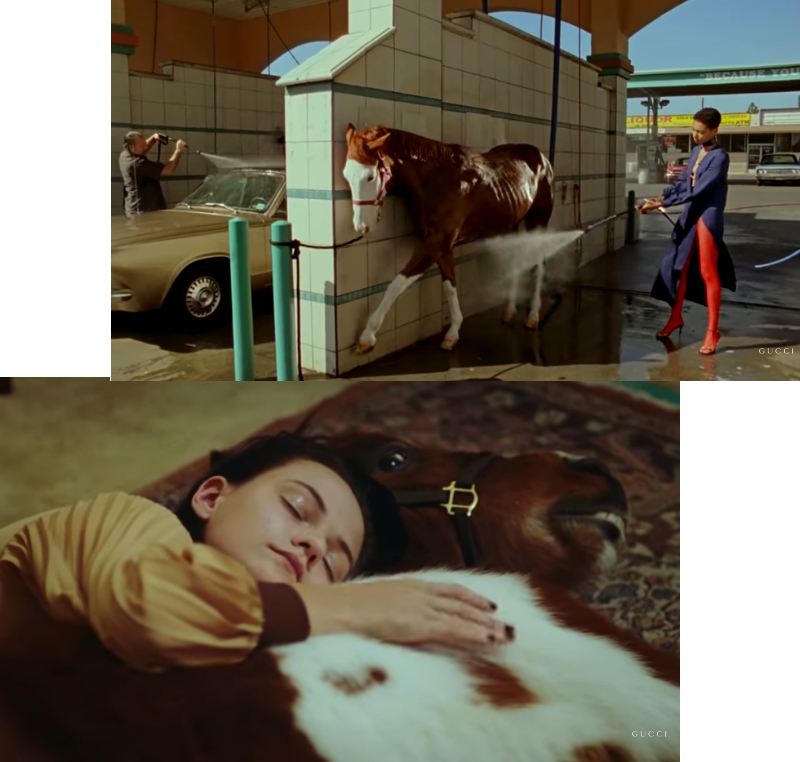 This article titled “Can equine therapy de-stress a city slicker?” was written by Hannah Marriott, for theguardian.com on Tuesday 18th February 2020 07.18 UTC

One cold, bright morning in January, I stood in a field in Gloucestershire with my eyes closed and imagined I had four legs. Just metres away was a herd of eight horses. Before meeting them, advised therapist Lisanne Peters, it was wise to meditate. First, she told me to focus on sensations – the smell of hay; the birdsong. Then she instructed me to imagine myself, centaur-like, “with another back and another set of legs behind you. Feel how sturdy, how grounded, you are.”

This was the beginning of my equine therapy experience. I have never been a horse person but recently surprised myself by wanting to try it. Perhaps it was because I have felt as though lately I see horses everywhere, particularly in fashion. Gucci’s latest ad campaign, for example, imagines horses integrated in urban lives: models feed them in the supermarket and hose their hooves off with water on petrol station forecourts.

At couture fashion week, in January, during the Franck Sorbier collection, two horses appeared on a catwalk flanked by hay bales. On the high street, Uniqlo promoted its collaboration with Inès de la Fressange with a picture of the French style arbiter walking a majestic, milk-white horse down a windswept beach. In menswear, the Charles Jeffrey Loverboy show was inspired by the Orkneys’ 200-year-old pagan ritual, the Festival of the Horse. Fashion’s most powerful models – Bella and Gigi Hadid – are avowed horse girls who post frequent selfies nuzzling long noses.

Last summer, Maison Margiela’s couture show was dedicated to “a horse called Blue” that creative director John Galliano had met during three months of equine therapy in Arizona. This memory had bubbled up now, he said, in a podcast accompanying the show, because “I feel as though we are going through a survival mood and perhaps needing to revert back to trusting our instincts. You can’t lie to a horse, it’s so sensitive; it feels any anxiety or fear.”

Blinkers now off, I started to see the cowboy trend as a romanticisation of a time when human lives were enmeshed with horses’. It felt as though something was ahoof in the collective subconscious. I began to notice “equine therapy” briefly mentioned in spa break features in Vogue and in press releases for luxury retreats.

Like “forest bathing” and other increasingly popular eco-therapies, equine therapy speaks to an interest in getting back to something fundamental. After all, humans lived with horses for thousands of years – it was only the advent of the motorcar that separated us. “They have been alongside us in evolution always,” Peters says. “There is that quote: ‘History is strewn with the bones of a horse.’” The connection, she believes, “is something very ancient that we need to get back to”.

To be clear, while equine therapy might sound kooky and alternative, it has very serious applications. Peters’ centre – the Red Horse Foundation – specialises in trauma. Equine therapy is often used for addiction and to help children with autism and veterans with post-traumatic stress disorder. Research is in its infancy (a 2015 paper reported that the studies so far are promising but limited) but it is available, in certain counties, on the NHS and through well-respected mental health centres. It’s worth noting, too – not least for the sake of safety – that Peters would not advise trying it out anywhere that does not have deep specialist knowledge.

Still, Peters believes it can be useful for everyone, whether for leadership, team-building, anxiety or self-esteem: “It helps us to take control of our lives and our selves, like meditation, rather than letting external things take control of you – the horse is a master teacher for that.”

Horses “are not goal oriented”, she explains. “They don’t have the frontal cortex over-thinking.” And as prey animals, relying on instinct for survival, they are “living biofeedback machines”, she says: “They can tell if you are not being authentic – if you are behaving one way but feeling another.” Great “horse people”, she says, can align “thinking, feeling and action – we call it becoming congruent” – at which point a horse will do anything for you.

So far, my own equine therapy experience has given me plenty to chew on; there were more metaphors and lessons for my busy life, overseeing the Guardian’s fashion desk, than I could shake a riding crop at.

I made a sub-City Slickers entrance for my first session, arriving at the tranquil centre demanding an iPhone charger and insisting I make an important phone call before we start. Twenty minutes later, however, within the field of horses, it was impossible not to slow down.

Peters invites me to observe how peaceful the horses are, just being, just living. She asks if there are any I am drawn to and would like to meet. At first, they all look like horses to me. But gradually, I differentiate them. I choose a huge chesnut mare and try to say hi; she walks away, to another pile of hay. (I try not to think: “But of course I am such a charisma vacuum that even a horse would not want to hang out with me.”) Eventually, I approach slowly from the side, on Peters’ advice. The horse turns her nose towards my fist; I stroke her. “Now you have done a horse greeting,” Peters says.

Much of my experience is like this: simply moving among the herd as though I am one of them. It takes some time for me to stop trying to smile; to dispense with social niceties. It also takes time to stop feeling a bit judged when they appraise me based on my non-verbal cues, and walk away. It feels a bit like the way a PR with a clipboard at fashion week might coolly assess my status judging by my footwear and find me lacking. Gradually, though, I learn to be less person about it. Status anxiety is not very horse, after all. They accept what happens and move on. As I start to do the same, they seem happier to be around me.

My next session is more active – and hugely illuminating. I try to lead the alpha male, Brannan, around the paddock. I assume he will play ball – I’ve seen this sort of thing on TV – but he doesn’t. As he resists, I feel a familiar sensation of not being entirely comfortable telling others what to do, something I can hide behind smiles at work. Brannan, however, reads me like a book. He ends up leading me, instead, back to the paddock entrance. I try again. He demures. Later, Peters advises me that this kind of exercise is “all about having an intention – knowing where you want to go. It’s about being comfortable with being the leader.” All of which sounds familiar.

I’m surprised by how powerful hanging out with horses has been, and how clearly, and wordlessly, Brannan laid bare one of my issues. I’m not finished with him yet: I’ll be back for another session and will try to lead him again. With Peters’ help I’m sure I will succeed. I’ll be able to stand on my own feet once I’ve cracked it. All four of them.

• Read more from the spring/summer 2020 edition of The Fashion, our biannual fashion supplement