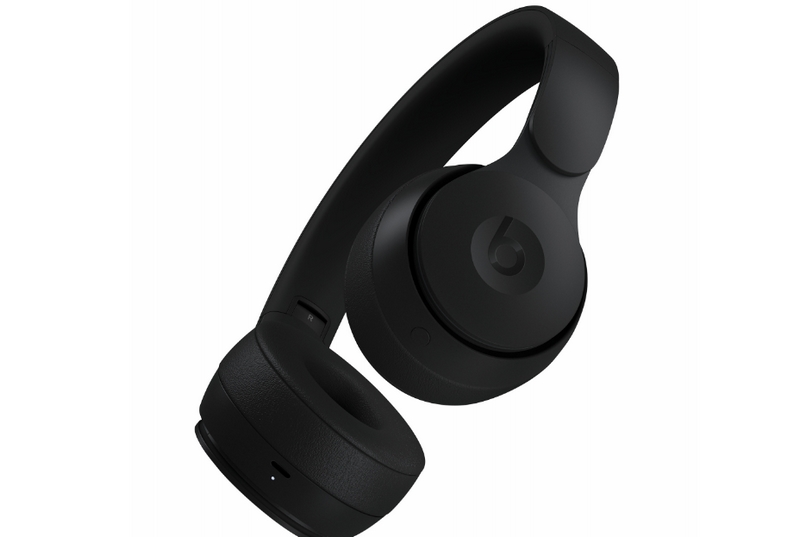 Apple-owned Beats is moving into the on-ear noise-cancelling world with the Solo Pro, using the same chips that make the PowerBeats Pro and AirPods so good.

The £269.95 Beats Solo Pro blends the design of the firm’s existing Solo with the wired EP headphones for an attractive, modern and fairly sleek design.

The leatherette ear cups are well-padded and the soft-touch silicone headband stays in place on your dome. The ear cups articulate to fit as flat and as firmly on your ears as possible, while the metal arms slide into the headband for size adjustment.

At 267g, the Solo Pro are about mid-weight for headphones. The arms fold into thirds to collapse down but the thick ear cups means they do not get quite as small as I would like for travelling. They ship with a soft recycled-felt case for protection but they feel robust enough to just toss in a bag.

The Beats app on Android also provides some of the same functionality. You can pair your headphones using the app – it will show battery level when you turn them on in a little on-screen pop-up and manage various settings.

The Bluetooth connection to a variety of devices including an iPhone 11 Pro, Samsung Galaxy Z Flip and Microsoft Surface Pro 6 was rock solid. You can use them wired with a special Lightning to 3.5mm cable (£35) but it is not included in the box.

The outside of the right ear cup hides volume and playback controls under the large Beats-logo disc. Press it up or down to adjust volume. Press the logo in once for pause/play, twice to skip forward and thrice to skip back. Press and hold it to activate Siri on an iPhone, iPad or Mac, or Google Assistant on an Android phone.

A small button on the bottom of the left ear cup swaps between noise cancelling on, off and a transparency setting, which pipes the sounds from the outside world into the headphones. Press and hold the button to pair another device.

The headphones turn off and on by folding and unfolding them but taking them off does not pause the music, as has become common with high-end headphones.

The Solo Pro have some of the more effective noise cancelling I have tried with on-ear headphones, which typically struggle to compete with a large set of over-ear noise cancellers.

Road noise, engine drone and background office noise was reduced, while noisy commuters were slightly quietened. The headphones do a fairly good job of passively blocking out noise without noise cancelling active, too. They can’t quite match B&W, Bose or Sony but the Beats aren’t that far behind.

The Solo Pro are also some of the best-sounding Beats headphones I have listened to. They produce clear, precise sound that is almost clinical at times, with well-controlled and punchy bass, pleasing mids and crisp highs.

You can hear every note in complex tracks such as the Who’s Baba O’Riley. Ella Fitzgerald and Louis Armstrong sounded particularly good in Summertime, while they handled classical music well, too.

Dr Dre sounds good, so does high-energy electronica such as Edge by Cicada. But they sound best with punchy rock and pop. Play Highly Suspicious by My Morning Jacket and they really come alive.

Charging is via Apple’s proprietary Lightning cable, including those supplied with iPhones. A USB-A to Lightning cable is included in the box. A 10-minute charge provides enough battery for up to three hours of playback, while a full charge takes one hour and 45 minutes.

Apple doesn’t provide a rating for the number of charge cycles expected from the battery in the Solo Pro but it is replaceable and the headphones are generally repairable.

The Solo Pro are made of up to 36% recycled plastic, while the felt case is made of recycled plastic. Apple also offers trade-in and free recycling schemes, including for non-Apple products.

The Beats Solo Pro cost £269.95 and are available in a range of single and two-tone colours.

The Beats Solo Pro are a great set of on-ear noise-cancelling headphones.

They sound good, have solid noise cancelling and are comfortable and stable on your head. Bluetooth connectivity is rock-solid and the battery lasts long enough for the weekly commute or flights.

Apple’s H1 chip enables a whole host of convenient features with the firm’s devices, while the Beats app brings some of them to Android, too.

It is disappointing that a 3.5mm to Lightning cable is not included in the box, and they are certainly expensive. But at least you are not just paying for a big flashy brand any more.

If you like on-ear headphones and want a good-sounding, noise-cancelling set, then you can’t go far wrong with the Beats Solo Pro – particularly if you use Apple gear.

Cons: expensive, no headphones cable in the box, need to turn off ANC for best sound, no pause on remove, no support for aptX or better