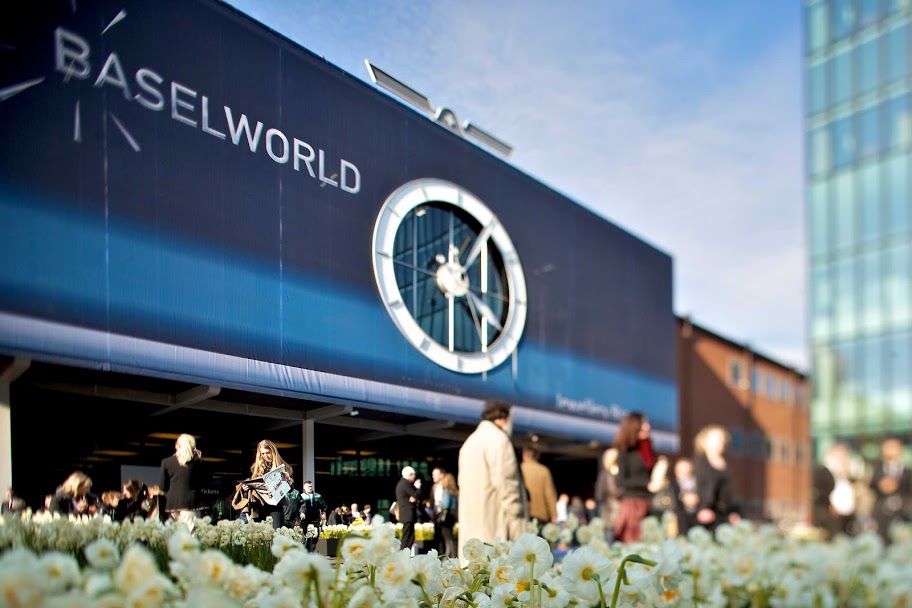 Switzerland’s Basel is once again calling the watch lovers from around the world for a new editon of prestigious Baselworld (April 25 to May 2, 2013) – the biggest and one of the most important events in the watch and jewerly industry sector. At a glance, Baselworld – The World Watch and Jewellery Show means 104,000 visitors from 100 countries, 1,815 exhibitors from 45 countries, 3,300 journalists from 70 countries, and 160,000 m2 exhibition area (in 2012). 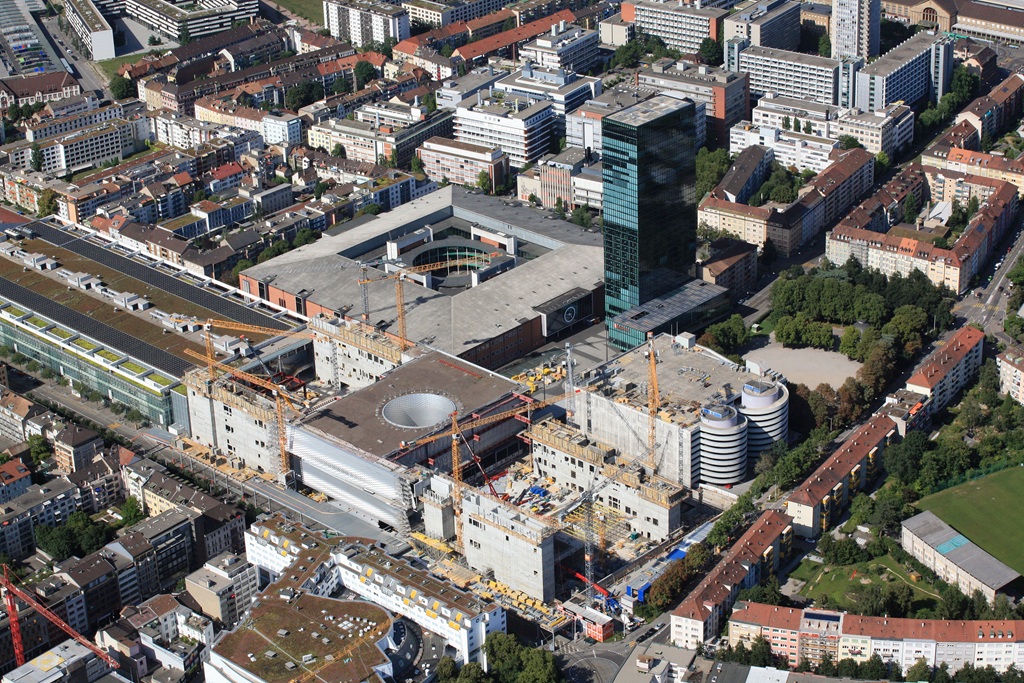 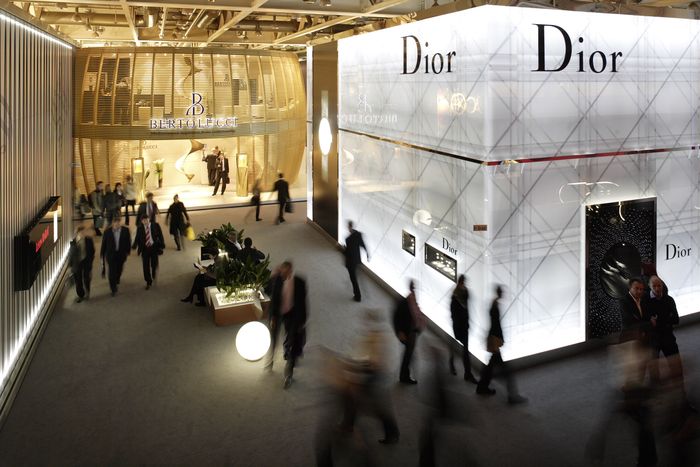 Alongside renowned watch and jewellery manufacturers, such as Omega, Chopard, Rolex or Patek Philippe, a number of the
world’s most well-known fashion brands will also be exhibiting in Basel and giving visitors an initial peek at their new watch and jewellery lines. For several years now, a close bond has existed between BASELWORLD, the most important watch and jewellery show globally, and the leading fashion houses with their designers. This liaison has its roots in the early 1970s when Gucci was one of the first fashion houses to introduce watches of its own.

Here are some of the new exceptional mechanical masterpieces presented at BASELWORLD 2013. 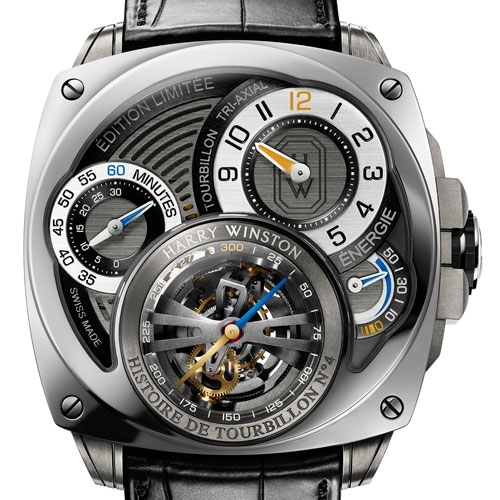 Histoire de Tourbillon 4‘s heart is a tourbillon inside three concentric cages, each rotating at a different speed and at a different angle. Histoire de Tourbillon 4 exclusive timepiece (20-piece limited series) has two, fast rotating barrels to deliver superior energy with lower friction. The variable inertia balance is controlled by 18k gold timing screws in the rim. Bold, contemporary colours and an “open grid” dial configuration accentuate the movement, as do the domed sapphire crystals which are arranged on multiple levels. 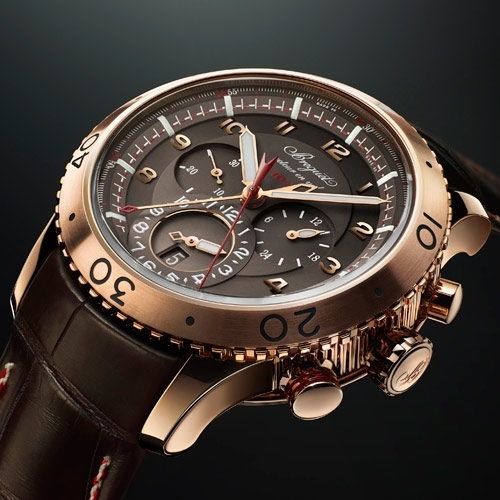 The iconic Breguet Type XXII this year extends to a new iteration in rose gold, with a movement vibrating at an increased frequency of 10 Hz (72,000 vibrations/hour) thanks to a silicon escapement with flat balance spring. This high frequency delivers outstanding precision and regulating performance for a chronograph whose seconds hand sweeps the dial in 30 seconds. The red and white markers on the minute scale, on the inner bezel ring, show whether the hand is on its first or second rotation. In addition, this exceptional timepiece incorporates a flyback function, a second time zone with 24-hour indicator, date, and small seconds making one complete revolution in half a minute.

SuperLigero approach means the association of ultra-thin materials and proven sturdiness. “Lightnium”Â, an aluminium and lithium alloy used in aeronautical engineering was picked up by the watchmaking both in development movements and in the aesthetic expression of these creations. The FV No.8i 8-piece limited edition features the famous bezel with its combined elliptical and circular shape that has become a brand signature. It is equipped with a hand-wound tourbillon movement with Lightnium bridges, silicon escape-wheel and lever, as well as an oscillating weight adorned with CÃ´tes de Geneve. 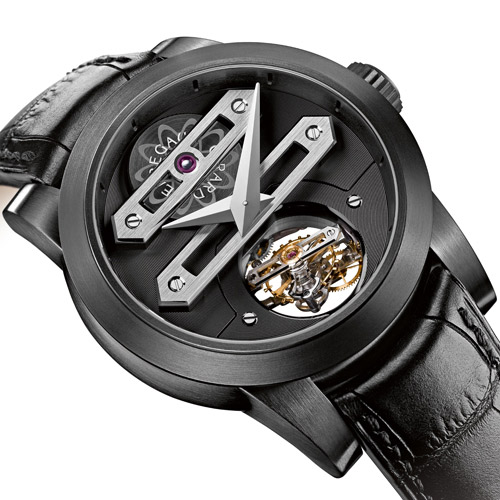 In 2013, the Bi-Axial Tourbillon watch has a 8-piece limited edition with black DLC titanium case. This timepiece is equipped with two concentric cages enabling the regulating organ to perform multidimensional rotations. An inner carriage bearing the balance, the balance-spring and the escapement, spins once around its axis every 45 seconds; while an outer carriage makes a full turn in one minute and fifteen seconds, thus enabling a rotation around a second axis.
The second emblematic signature feature is the perfectly aligned architecture of the bridges, reflecting the creations of Constant Girard and his successive research that gave rise to the “Tourbillon with Three Gold Bridges”. 8-piece limited edition. 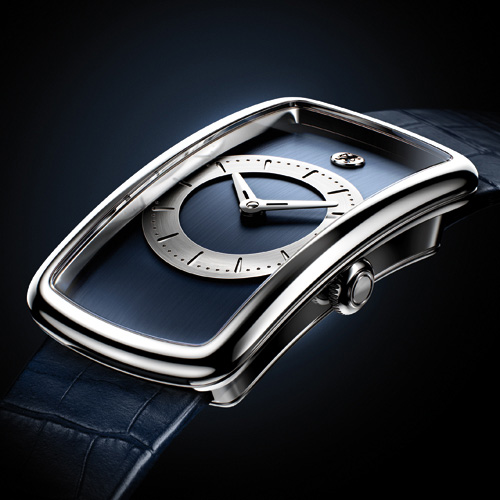 The refined aesthetic of latest manufacture timepiece by Badollet, the work of Eric Giroud, is equalled only by the mechanical complexity that brings this timepiece to life. The flying tourbillon movement, exclusively designed and developed for Badollet, is deliberately hidden from view, revealed only through the transparent case back whose sapphire crystal takes the shape of the infinity symbol, a tribute to time as the universal driving force. 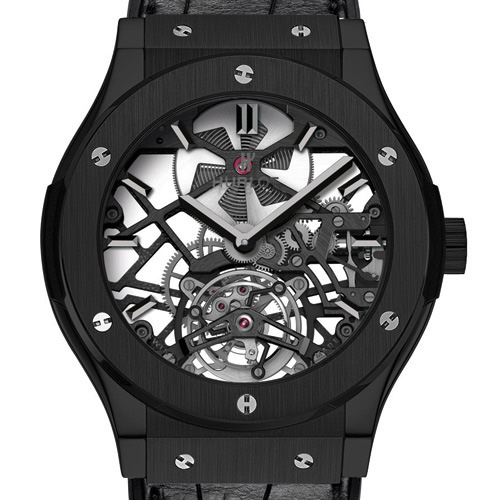 Classic Fusion Tourbillon Squelette Black Ceramic’s openworked movement entirely designed, developed and produced by the Hublot watchmakers is resolutely graphic. The polished and satin-brushed black ceramic case of this 99-piece limited edition radiates a sophisticated, contemporary appeal. And the most beautiful of all horological complications – the tourbillon – is revealed in all its splendour at 6 o’clock. In a nod to brand history, the hands echo the design of the very first Hublot watches, providing a fine demonstration of fusion between past and present.

Masterpiece Seconde Mystérieuse watch (125-piece limited collection) is, first of all, mysterious. It brings a new face to time measurement. Driven by a new proprietary movement, the ML215, – the twelfth to be entirely developed by the brand – it indicates seconds on a linear display combining vertical and horizontal scales, read per 15 seconds. The mystery comes from a blued steel hand that rotates on its axis, creating the illusion of levitation. Hours and minutes are shown at 2 o’clock; the rest of the dial is cut away to reveal rhodium- or ruthenium-plated bridges whose geometric form lends an infinitely contemporary feel. 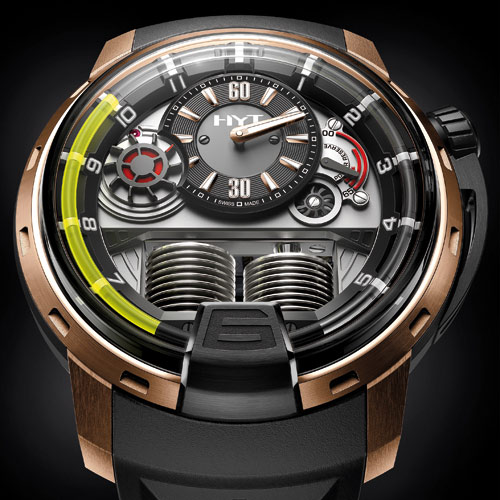 Revolutionary and inspired, HYT takes an out-of-the-box approach to time. A hybrid wristwatch combining horological mechanics with fluid mechanics seems like an impossible dream, and yet… Two reservoirs take position at 6 o’clock. As one compresses, the other expands, pushing the liquid through the capillary. As the hours go by, the fluorescent liquid advances. The meniscus, in the shape of a half moon, marks the breaking point with the other fluid in the tube, indicating the time. At 18:00, in a retrograde movement, the fluorescent liquid reverts back to its original position. Overlapping the minute regulator in the centre is the small seconds counter that looks for all the world like a waterwheel.

The architecture of the DB2509 calibre is built around a silicon and titanium tourbillon beating at 36,000 vib/h, one of the fastest and lightest on the market. This movement also drives a power indicator, seconds, as well as a retrograde display of the age of the moon. Hidden on the back of the watch, this masterpiece will surprise connoisseurs looking for subtle details. The classically understated dial thus provides readings of the perpetual calendar and spherical moon-phase indications, sublimated by the Manufacture’s signature silver-toned guilloché motif. The steady, rhythmical beat of the jumping seconds embodies the very essence of the horological emotions procured by this stunning creation. 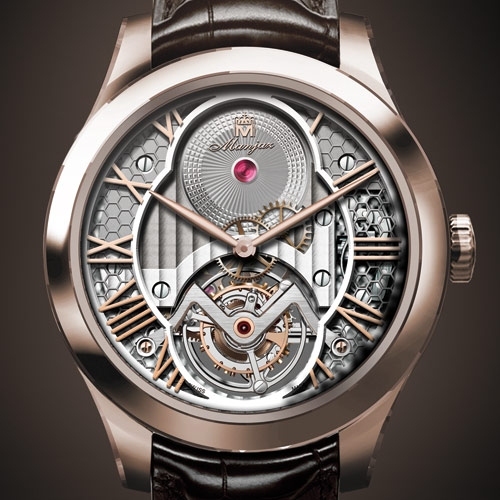 MANJAZ combines the entire Swiss expertise and tradition with Chinese philosophy. This concept has been forged under the guidance of watchmaker Cédric Grandperret. The prime purpose is to highlight the supreme horological complication, the tourbillon.

Positioned at 6 o’clock, it enhances the symmetry of the dial and its geometrical play: vertical Côtes de Genève, Roman numerals and a guilloché disc engraved with the brand logo. Moreover, Manjaz is also keenly aware that a modern touch is very important, and the dial is finely crafted, hollowed and sublimated. The 41 mm pink gold case provides a perfect setting in which to magnify this cosmopolitan harmony. The Yin – powered by the MAZ-001 calibre – and the Yang – by the MAZ 022 calibre – face off in a splendid mechanical duel. It will now be up to enthusiasts to choose between these two protagonists. 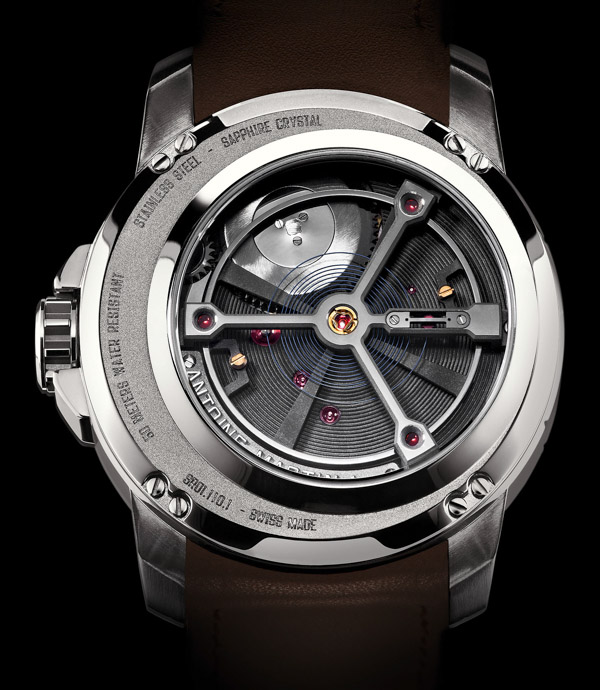 “Slow Runner” or “decelerating time” was an original idea from the Manufacture Antoine Martin who drastically reduced the frequency to 7,200 semi-oscillations (vibrations) per hour, meaning 1 Hz, while preserving the qualities of a high -precision watch. On the practical side, the escapement and balance-spring are made of silicon. One essential point is that the giant 24 mm-diameter balance generates so much kinetic energy that it cannot be disturbed. Moreover, the balance features two gold adjustment screws, the balance rim is in grade 3 titanium, and the ultra-precise balance- spring production process enabled watchmakers to optimise its inner point of attachment and its curve. All these technical details serve just one mission: that of slowing time down in order to sublimate it. 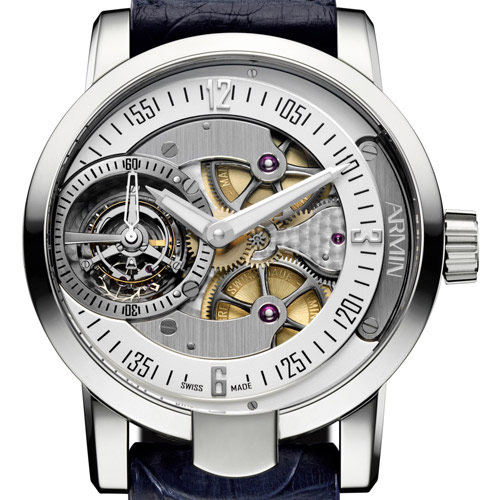 The complication of the ATC11 calibre located at 9 o’clock is distinguished by its 18-carat white gold lever, as well as by a construction placing the balance and the seconds pinion along the same axis. The hand-wound calibre has a 10- day power reserve. It is driven by two barrels of which the winding mechanism is visible through the dial: an opening onto the mechanism bearing the unmistakable Armin Strom signature.