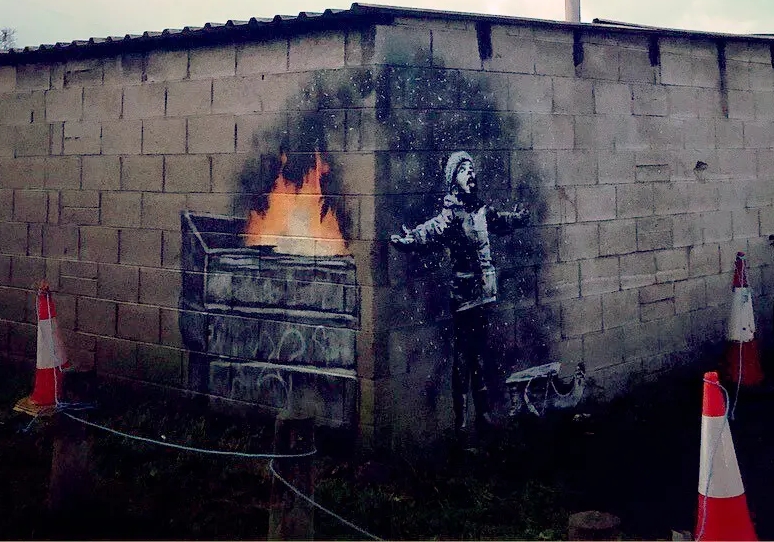 This article titled “Banksy confirms he is behind Port Talbot mural” was written by Steven Morris, for The Guardian on Wednesday 19th December 2018 17.12 UTC

Banksy has confirmed he is behind a striking bittersweet artwork that has appeared on a garage in the south Wales steel town of Port Talbot.

From one angle, the piece shows a child in a bobble hat with a sled, apparently enjoying a snow shower and trying to catch the flakes on their tongue. But from another, it becomes clear that what is actually falling on the child is ash billowing from a bin, or perhaps a chimney.

Banksy appeared to confirm the work was his on Wednesday by uploading an image of it on to his website. A video was also posted on the artist’s Instagram account showing the mural accompanied by the children’s Christmas song Little Snowflake. The camera rises above the garage and shows Port Talbot’s rooftops and industrial works wreathed in smoke.

Ian Lewis, 55, a steelworker, was surprised to discover Banksy had been at work on his garage wall. “I’m a bit overwhelmed at the moment, to be honest. Fans of Banksy have come along to see it,” he said.

The Aberavon councillor, Nigel Thomas Hunt, said: “We’re buzzing down here. The placing of the work is very clever. You can look at the painting and see the furnaces in the background. We’re delighted. I’ve written to the council already and we need to secure this really quickly.”

This year, the World Health Organization said Port Talbot was the most polluted place in the UK. But in May, Neath Port Talbot council said the WHO got the figures wrong and had apologised.

Port Talbot is no stranger to exciting art. The Welsh and Hollywood actor Michael Sheen starred in National Theatre Wales’ production of The Passion during the Easter of 2011. More recently, NTW returned to tell the story of the steelworkers’ battle against proposed closures in We’re Still Here.