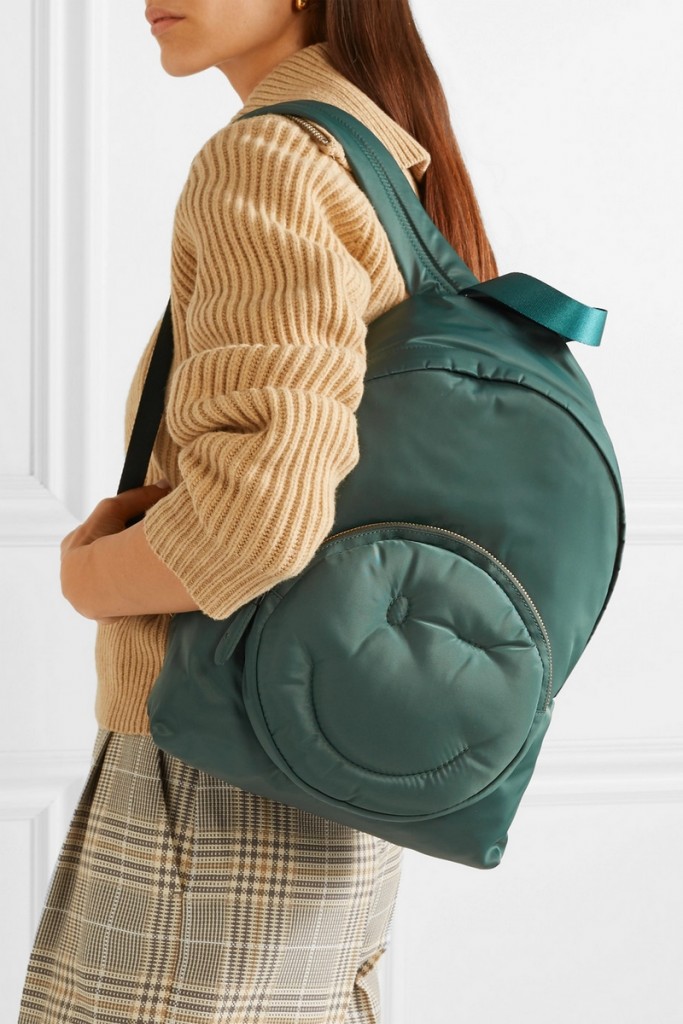 This article titled “Bags of style: how the backpack became a fashion essential” was written by Ellie Violet Bramley, for The Observer on Saturday 8th June 2019 11.59 UTC

They used to be carried by the slightly awkward-looking kids in the school playground or hikers and were much more likely to be sported by men than women. But now, go to any high street, office or packed rush-hour bus and the humble backpack is everywhere.

“There has been an enormous change in attitudes towards day packs,” says Ralph White, UK managing director of the Swedish rucksack brand Fjällräven.

According to Domitille Parent, product director at Eastpak, a brand that has been making rucksacks for over 40 years, an increasing number of backpack buyers are women: nearly 60% of online sales in the UK are made by women, and that number has been rising year-on-year. In the US, according to the market research firm NPD, sales of what they label women’s backpacks are up by 28% in the past year – with New York, Los Angeles and San Francisco the top three growth regions – while sales of men’s backpacks are down.

Of course, it should be no surprise that women are using a style of bag that is practical and – increasingly – stylish, too. But it has taken something of a shift in attitudes for the backpack to find mainstream traction in workplaces – and gender parity. As with many things, Miuccia Prada was a pioneer: when she released a nylon rucksack, made from military parachute fabric, in 1984, it was considered radical. All the other bags around were, she said in a recent interview with Vogue magazine, “so formal, so lady, so traditional”.

In the past, style blogger and backpack-wearer Susie Lau, aka Susie Bubble, has cited the Phoebe Philo effect. As former designer at Celine, Philo led the charge for what many brand “ugly” fashion, from Birkenstocks and clogs to backpacks.

Skipping forward to 2016, Burberry’s monogrammed backpacks were the elevated version that convinced the likes of Cara Delevingne to embrace the look. At the Tribeca film festival last year Sarah Jessica Parker, the woman to thank for sparking many an impractical tiny handbag trend, was spotted wearing a rucksack on the red carpet. On the Prada men’s AW19 catwalk they were worn by Gigi Hadid and Kaia Gerber, and Chanel’s 2020 Cruise show featured a tweed backpack.

With many high-fashion brands, from Gucci to Coach, making rucksacks; the mid range of the market seeing a proliferation of more sophisticated designs – from the likes of Herschel to Dr Martens – and more than 400 styles offered on Asos, backpacks have come a long way from the days of Power Rangers or My Little Pony bags.

The rucksack’s fashion credentials have been bolstered by the rise of gorpcore – a neologism coined in 2017 from the acronym “gorp”, which stands for “granola, oats, raisins, peanuts”, aka trail mix, and encompasses all manner of camping attire. The ongoing popularity of luxury sportswear has helped make rucksacks less back-of-the-bus and more chia seeds and balasana. With the rise of the urban hiker look last year, the field trip look went high-fashion. “The outdoors as a whole has definitely got more fashionable,” says White. Plus it’s come into cities.

With some of the most popular brands hailing from Sweden, they play into our era’s love of all things Scandi. As White explains: “There has definitely been a rise in the popularity of Scandinavian culture – from hygge to fika. Fjällräven takes a very Scandinavian approach to its product design.” Its now-iconic Kånken, was introduced as a bag for Swedish children in 1978.

The sheer practicality of the rucksack is a plus point, too. Backpacks are “easy to wear, hands-free, fuss-free and comfy,” says Georgie Tym, a lecturer at Cordwainers, the shoes and accessories brand of London College of Fashion. Function appears to be winning over any lingering competition from archaic, gendered double standards. If Danielle Drake, PR manager at Sandqvist, a high-end Swedish bag brand, is to be believed, the backpack is to bags what flats are to high heels. “The past pressure of having to cram all of your gear into a shoulder bag just for the sake of dated perceptions on women’s workplace attire has no place in today’s world.”