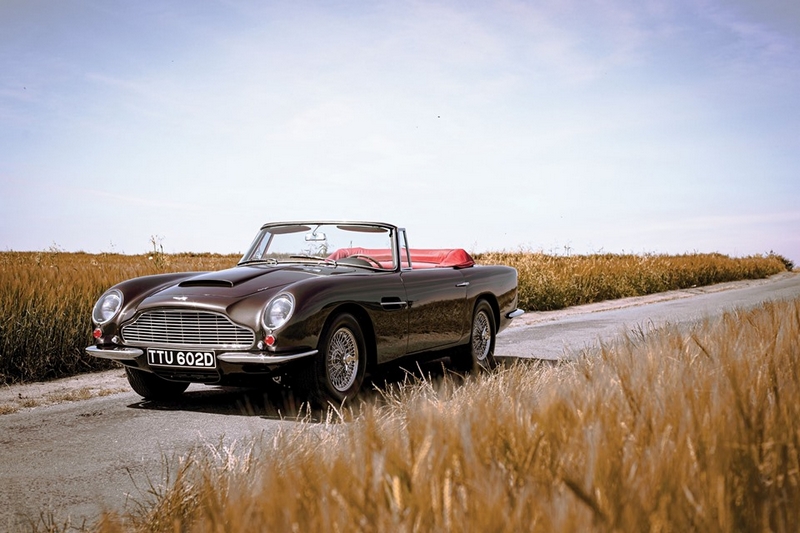 Aston Martin has partnered with Sotheby’s to host the inaugural one-make sale An Evening with Aston Martin; @aston martin

The Aston Martin Lagonda chief executive, Andy Palmer, clearly had his eye on his place in automotive history when he launched a grandiose “second century plan” for the carmaker in 2016. With seven new models in seven years, his vision prepared the way to the firm’s landmark stock exchange listing last October, which heralded a new era for the 106-year-old British marque.

The 10 months since then have not quite followed Palmer’s script. Aston Martin floated at £19 per share, valuing the firm at £4.3bn. If it had held that value it would now be in the FTSE 100 index of blue chip British businesses. Instead, the shares have lost three quarters of their value and they hit a record low on Thursday of less than £4, making it the worst-performing listing on the London Stock Exchange’s main market in the last two years. Aston Martin is now worth £1bn.

Investors are now questioning whether James Bond’s favourite carmaker can make it through the next year without going back to markets to raise more cash to carry out its ambitious plans. Hedge funds are circling, with short sellers betting that the value of the company’s shares and debt will fall.

The share price fall has followed repeated disappointments for investors: spiralling costs, supply chain disruptions and, most worryingly, a slump in sales.

Aston Martin had forecast sales of about 7,250 cars in 2019, the first step on an ambitious path to almost double volumes to 14,000 in 2022. However, the company shocked investors in July by slashing its 2019 sales prediction to 6,400 because of economic uncertainty in the UK and Europe. That raised questions about whether its ambitious growth plans were a step too far.

“They stuck to a story ‘that we’re going to sort ourselves organically’,” said Philippe Houchois, an analyst at US investment bank Jefferies. “The market doesn’t believe they can.”

Investors at the initial public offering, who included employees and customers, thought they were buying the new Ferrari, with a James Bond twist. The Italian sports car-maker converted its exclusive brand into a booming stock in New York with a valuation about 35 times its annual earnings, a racy multiple more akin to a fast-growing luxury goods company than a metal-bashing carmaker.

Investors are now left wondering whether the firm is, in fact, neither of those, but just the Aston Martin of old: a maker of good-looking status-symbol cars which has gone bust seven times since its beginnings in 1913.

Aston Martin’s ambitions are staked on sales of its new DBX model. The company hopes that its first foray into the sports utility vehicle (SUV) market will become its most popular model, with 4,000 to be built in 2021.

It is a well-worn path for luxury carmakers, following the success of Porsche’s Macan, now the German manufacturer’s best-selling car, Bentley’s Bentayga and Rolls-Royce’s hulking Cullinan. The first deliveries of the car, aimed particularly at multi-millionaire women in the US and China, are due in the second quarter of 2020, but spending on the new plant and the DBX launch will put short-term pressure on its cash holdings. And that is before the longer-term investments needed for electrification are taken into account.

The share price fall has put immense pressure on Palmer, a former Nissan engineer who took over Aston Martin in 2014. He has already faced criticism over his high salary, although the share price fall means he is unlikely to be paid the entirety of a potential £6m bonus pot. Palmer sold shares worth £35.8m in the initial public offering (IPO); £29.2m went to cover future tax liabilities, while he kept £6.6m.

If Aston Martin does need to raise money, investors will want something in return – new management or a new structure, said Houchois. Aston Martin declined to comment, but Palmer told reporters in Tokyo on Thursday that he had a preference for borrowing money rather than issuing new equity.

Aston Martin raised no new capital as part of the stock market flotation, a decision that has come under scrutiny as its debt pile builds. But the selling shareholders certainly cashed in. Italian investor Investindustrial and a consortium of Kuwaiti funds raked in £1.1bn at the time of the IPO, which was led by bankers at Deutsche Bank, Goldman Sachs and JP Morgan Cazenove.

Aston Martin made a loss of almost £80m in the first half of 2019, after making a profit of £21m in the same period last year. Those weaker sales prompted a wave of downgrades. Moody’s Investors Service, the influential credit rating agency, downgraded its rating on Aston Martin’s debt last month because of the poor sales growth. This week, Credit Suisse, another of the banks paid to find buyers at the time of the share sale, slashed its target price on Aston Martin shares in half to £5.29, saying that weaker sales had pushed up the company’s debt forecasts.

Some analysts believe it is a question of when, rather than if, Aston Martin needs to raise more money and think it could be scooped up by a bigger rival.

Nishad Subramaniam, an equity analyst at Brewin Dolphin, said last year’s stock exchange listing was “a great exit for its private owners but not so much for shareholders who have participated since”.

He added: “Aston Martin Lagonda is running a tough balance sheet with high investment needs and therefore risks a liquidity event in which it might have to pursue the route of a rights issue as a means to continue funding operations. The brand arguably remains strong and therefore recent weak trading might garner some interest from one of the bigger automakers as a strategic purchase.”

Some analysts still see a way through for Aston Martin if the DBX, priced at about £150,000, delivers the growth investors crave. The SUV, they believe, could broaden Aston Martin’s appeal beyond its association with James Bond, although the latest movie, due in April 2020, will feature the Valhalla hypercar.

“It feels in some respects like a masculine brand,” said Ian Fletcher, an automotive analyst at the IHS Markit data company. “I guess they see that the crossover will open the doors [to a new market].”

Yet hanging over their expansion efforts are a multitude of other concerns, for the global economy and the car industry more specifically. Recession fears are rising in major economies, demand is shrinking in China and Europe – and then there’s Brexit.

Palmer recently told Autocar magazine that the government’s Brexit strategy had been “laughable”, echoing the exasperation across a global car industry crying out for certainty.

Aston Martin’s continued reliance on sales to wealthy Britons means that the worsening outlook for the UK economy – or the threat of disruption to production if imports stutter – looms large over the its prospects for the coming year.

“Being overexposed to the UK is probably not a good thing at this stage,” said Jefferies’ Houchois.