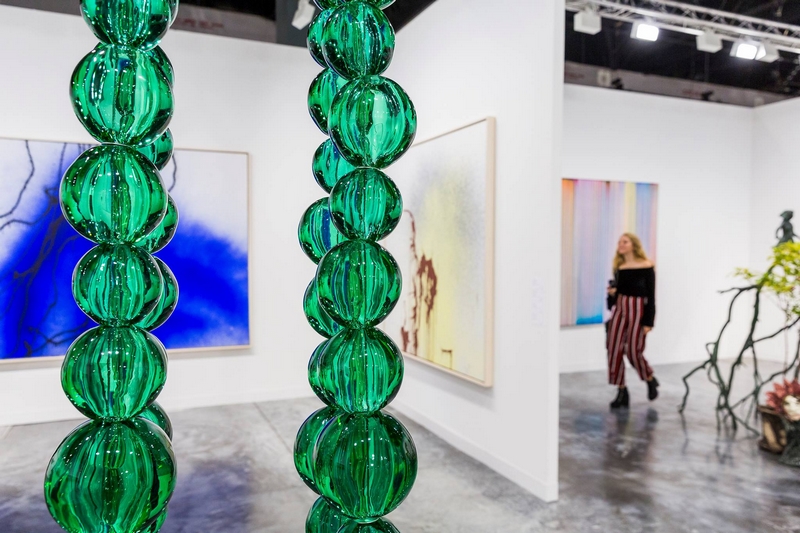 This article titled “Art Basel Miami: how this year’s fair aims to increase diversity” was written by Nadja Sayej, for theguardian.com on Tuesday 4th December 2018 09.00 UTC

Every December, the art world descends upon Florida for the Art Basel Miami Beach fair, a rambunctious affair with glitzy celebrity parties, exclusive dinners and wealthy bravado. But following on from last year’s post-#MeToo theme, this year also promises to further a vital conversation away from all the excess.

After a year that’s seen a much-needed increase in the diversity of artists being given a spotlight across the board, you can expect to see more art from the African Diaspora, as well as African American and Native American artists, than you’ve ever seen before in Miami.

Pinta Miami, the art fair focused on Latin American art, returns with over 80 art galleries showcasing 300 artists with a special focus on art from Mexico, Spain and beyond. Expect to see works by the 1960s Op Art forefather Carlos Cruz-Díez, from Venezuela, alongside the paintings of Fernando Botero, a Colombian artist whose comical portraits are a form of political satire.

According to the curatorial director, Ysabel Pinyol Blasi, the presence of this fair is long overdue. “Contemporary artists in Latin America offer a unique perspective on the social and political ructions of the past 30 years,” she said. “They address economic inequality and governmental dysfunction with a degree of nuance sometimes lacking in American art.”

Even more Latin American art continues at the Pérez Art Museum Miami, an institution in the city’s downtown waterfront on Biscayne Bay, which celebrates its 35th anniversary with Latin American and Caribbean art, alongside art from the African diaspora. See magical light sculptures by the Peruvian artist José Carlos Martinat alongside the Portuguese artist Pedro Neves Marques, who is showing a set of short films that tie together the Zika virus, Brexit, the Trump administration and the recent election of the far-right Brazilian president, Jair Bolsonaro.

The inaugural Faena Festival gets political for its first edition in the heart of the city’s Faena district. With a theme entitled This is Not America, the festival questions what it means to be American today and lifts its title from an artwork by the Chilean artist Alfredo Jaar, which was inspired by Trump.

“It addresses America as concept more than a place,” said Zoe Lukov, curator for Faena Art. “It explores America as a myth and a narrative that has at times bound and divided us but ultimately has the power to unify.”

There are artworks like Land Acknowledgment, by the Argentinian artist Agustina Woodgate and the Rev Houston R Cypress, an activist and minister of Mickosuckee, a Native American tribe in Miami. Also on view will be a new series of artworks by the New York artist Derrick Adams, who shows America’s Playground, which revisits the history of the Jim Crow south and the historic black community of Miami’s Overtown neighborhood.

Over at the Untitled Art Fair, the Los Angeles artist Sadie Barnette, whose father Rodney Barnette founded the Compton chapter of the Black Panthers party, has a solo show at with Fort Gansevoort Gallery. She is showing her glittery, pink-infused work, including one photo of a perfectly manicured hand holding a book called Malcolm X Speaks, which was published in 1966, a compilation of the major speeches the civil rights leader made in the last eight months up to his death.

African art is in the spotlight at the Prizm art fair, which is themed around art from the African diaspora alongside Miami artists. The event is divided into two exhibits curated by Mikhaile Solomon and William Cordova, so expect to see artworks by the African American artist Deborah Willis, known for co-authoring a book of photographs of Michelle Obama, alongside the San Francisco artist Nyame Brown, whose paintings fuse Salvador Dalí surrealism with African themes.

Meanwhile, the Pulse art fair puts women into the spotlight. The political textiles of the African American artist Bisa Butler, who is showing with the Claire Oliver Gallery, will be on view alongside the Ojibwe-American artist Gina Adams, who is showing quilts bearing the phrases of broken treaties throughout history with the Accola Griefen Gallery. A video by Alicia Smith, tells the story of a warrior princess to tap into the anti-indigenous rhetoric currently in America.

The half-Cherokee artist Jeffrey Gibson, who is a member of the Mississippi Band of Choctaw Indians, is showing his paintings at the New Art Dealers Alliance art fair. Gibson – known for his rawhide paintings, inspired by the animal skin bags of the nomadic tribes of the Great Plains – will show artwork made from glass beads with Roberts Projects. Gibson is also giving a talk about how museums can diversify their art collections to include more indigenous art.

Getting outside the fairs is a must in Miami and AfriCOBRA, the pioneering black art collective, celebrates its 50th anniversary at the Museum of Contemporary Art North Miami, featuring artworks by founding members Jeff Donaldson, Gerald Williams and Jae Jarrell, among others, tracing the influence of this Chicago art group.

But newer art collectives are also in the spotlight, as well. The Art Africa Miami art fair this year boasts the theme: Black Art Matters. This politically charged exhibit brings a presentation of the YAMs art collective, who bring film, performance art and artworks that “explore the tensions of coexisting with the standard of straight, white supremacy”.

“Art has always been a tool to claim space, build power and question the injustices that have shaped our social experiences,” said the Art Africa Miami fair founder, Neil Hall. “In the world of art and culture, artists offer the viewer a chance to challenge society by bringing new meaning to the way we perceive the world.”