The Audi e-tron GT concept show car, a highly dynamic coupé with a low floor, made its debut at the Los Angeles Auto Show 2018. 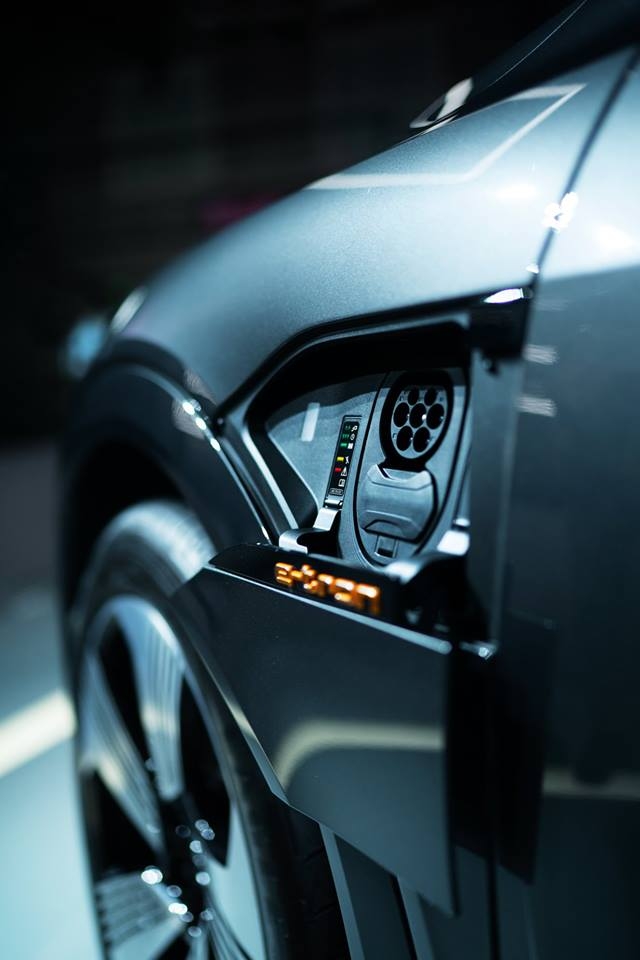 Audi had a star-studded cast at the 2018 LA Auto Show — including the new fully-electric supercar, the Audi e-tron GT concept. The technology in this luxury car was developed in collaboration with Porsche. The project will be developed into volume-production models by the end of 2020. Initial deliveries will be made to customers in early 2021.

The brand with the four rings launched its electric offensive with the world premiere of the all-electric SUV Audi e-tron in September 2018. By 2025 Audi will offer twelve automobiles with all-electric drive in the most important markets worldwide and achieve roughly one-third of its sales with electrified models. The SUVs within this portfolio include the Audi e-tron and the Audi e-tron Sportback due to make its debut in 2019. In addition, there will be a range of models with classic body layout such as Avant and Sportback. The range will cover every relevant market segment from the compact to the full-size class.

With the electric powered Audi e-tron GT concept a four-door coupe is making its debut as a show car. The volume-production counterpart is set to follow in approximately two years, and the concept will make its film debut in Marvel Studios’ Avengers 4, set to be released in theaters summer 2019.

The torque is transferred to the wheels via the quattro permanent all-wheel drive with torque vectoring, as you would expect for such a dynamic Audi. The performance subsidiary Audi Sport GmbH is responsible for subsequently transforming the car into a volume-production model.

The broad lines and the numerous functional elements of the body as well as the air vents of the wheel arches and the solid rear diffuser emphasize its origins in the wind tunnel. A low drag coefficient that reduces fuel consumption and the low uplift visually characterize the design. 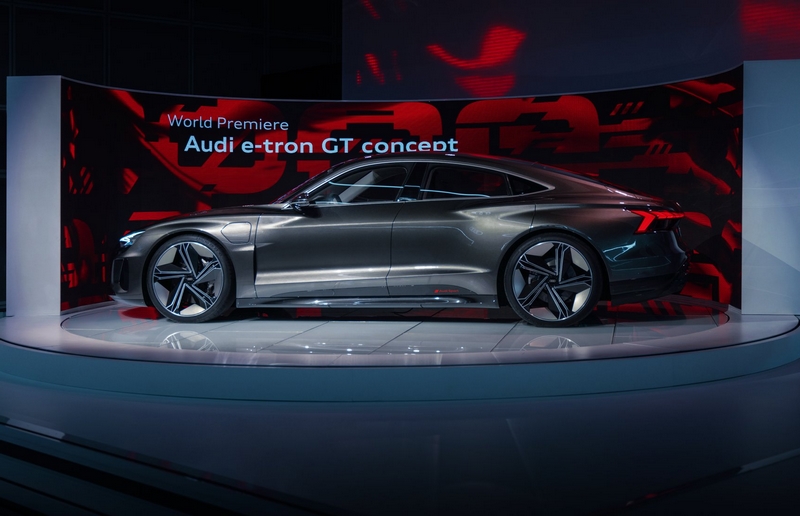 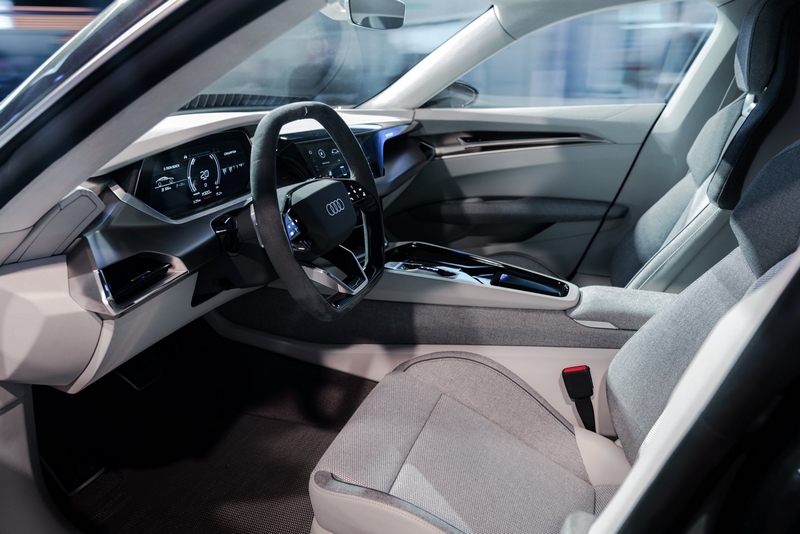 Together with the targeted airflow of the body, large air inlets in the front effectively cool the assemblies, battery and brakes. The hood with its airflow on the surface echoes the brand’s two latest show cars, the Aicon and the PB18 e-tron. It is designed in such a way that the airflow hugs the body, thus reducing undesired swirl.

With the concept car the designers have deliberately gone for the consistent use of sustainable materials – a clear statement of contemporary automotive design. Animal-based products are not used at all: the Audi e-tron GT concept comes with a vegan interior. Sophisticated, synthetic leather is used on the seats and other trim surfaces. Fabrics made from recycled fibers are used on the seat cushions as well as the armrests and on the center console. Microfiber material adorns the headlining and the trim of the window pillars. Even the deep-pile floor carpet is made from sustainable Econyl yarn, a recycled fiber made from used fishing nets.

With two luggage compartments, the Audi e-tron GT concept offers a great many options for a Gran Turismo. Here it makes full use of its concept advantage as an electric automobile with compact drive units. The rear with its large tailgate offers up to 450 liters (15.9 cu ft) of luggage capacity. Under the hood there is an extra 100 liters (3.5 cu ft) of capacity.

In future, the vehicle should accelerate from 0 to 100 km/h (0-62.1 mph) in around 3.5 seconds before going on to 200 km/h (124.3 mph) in just over 12 seconds. The top speed is regulated at 240 km/h (149.1 mph) to maximize the range. One feature that not all the competition can match is the option of fully utilizing the drive’s acceleration potential several times in succession. While elsewhere the drive is switched to overdrive for thermal considerations, the Audi e-tron GT concept can provide the driver with the full potential of both motors and the battery thanks to its sophisticated cooling strategy.

The range of the concept car will be over 400 kilometers (248.5 mi), determined according to the new WLTP standard. The required drive energy comes from a lithium-ion battery with an energy content of more than 90 kWh, which takes up the entire underfloor area between the front and rear axle with its flat design. The decisive advantage of this design is the car’s extremely low center of gravity – comparable with that of the Audi R8 – which in turn decisively benefits dynamic handling. 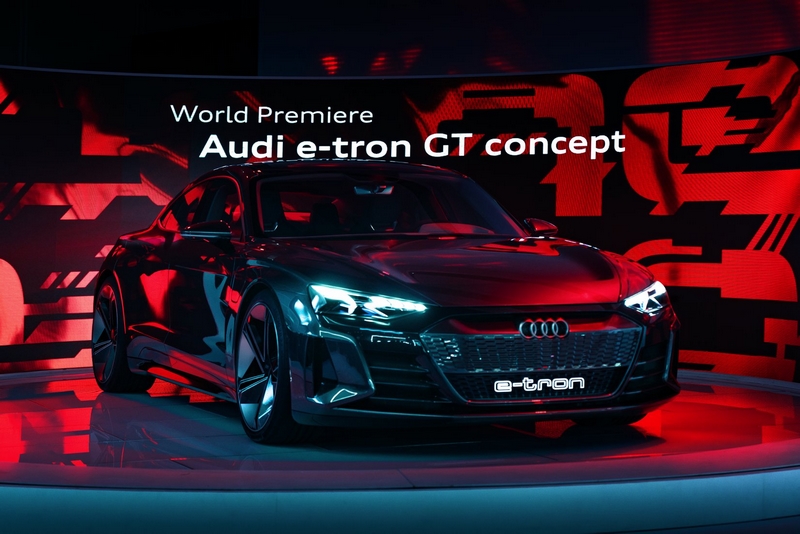 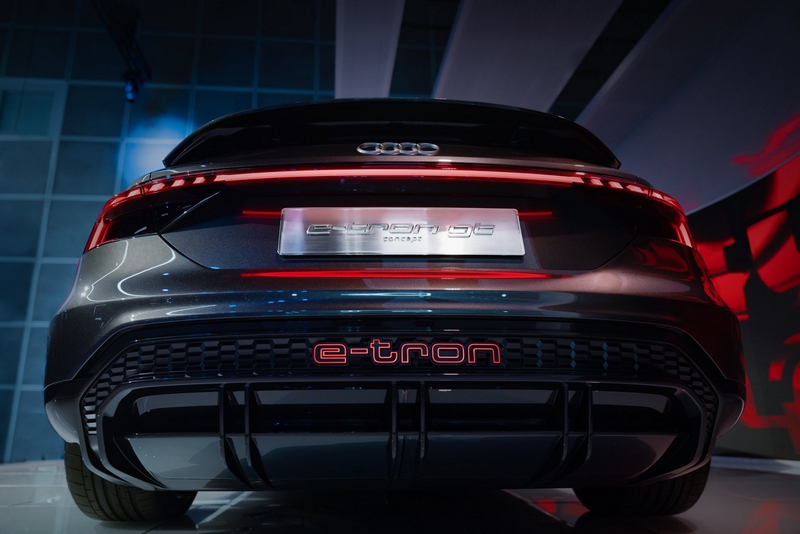 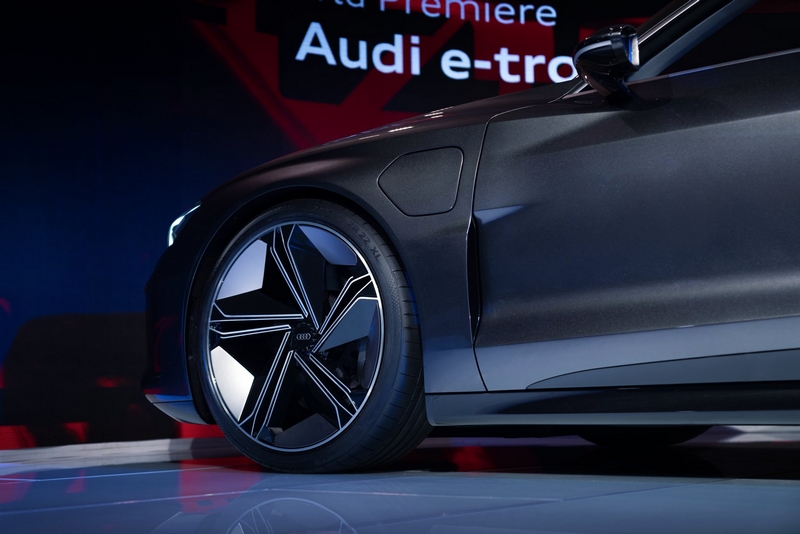 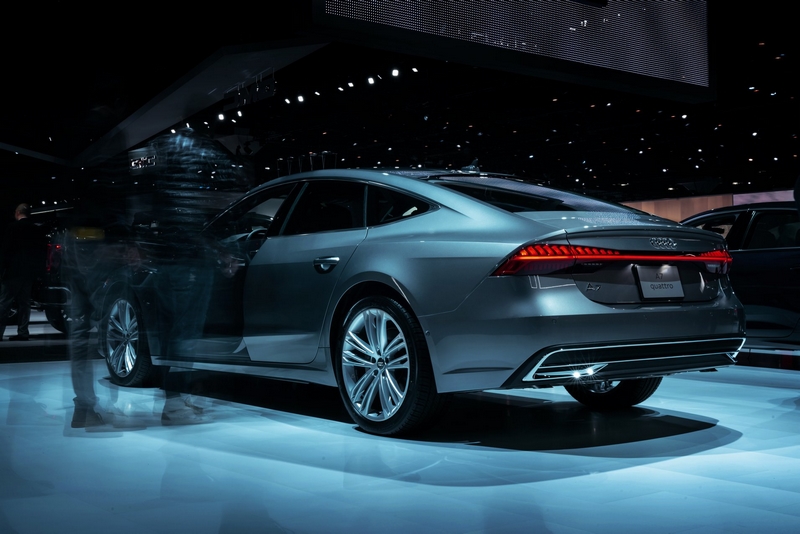 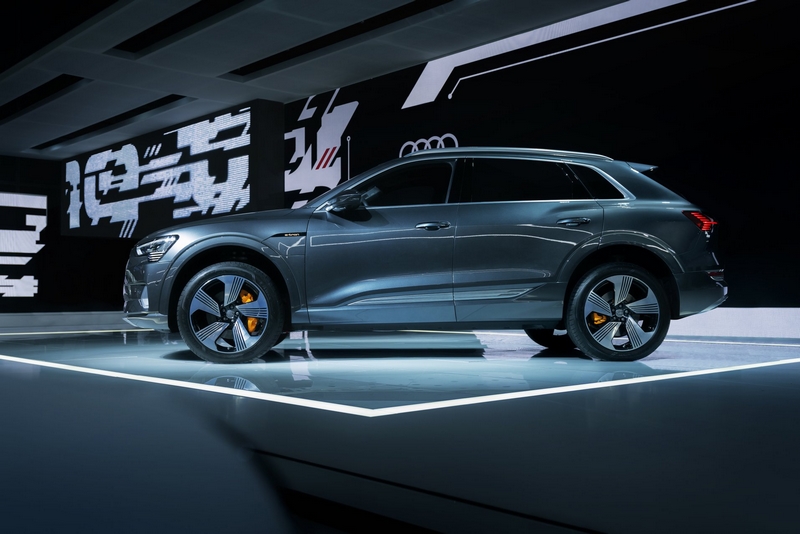 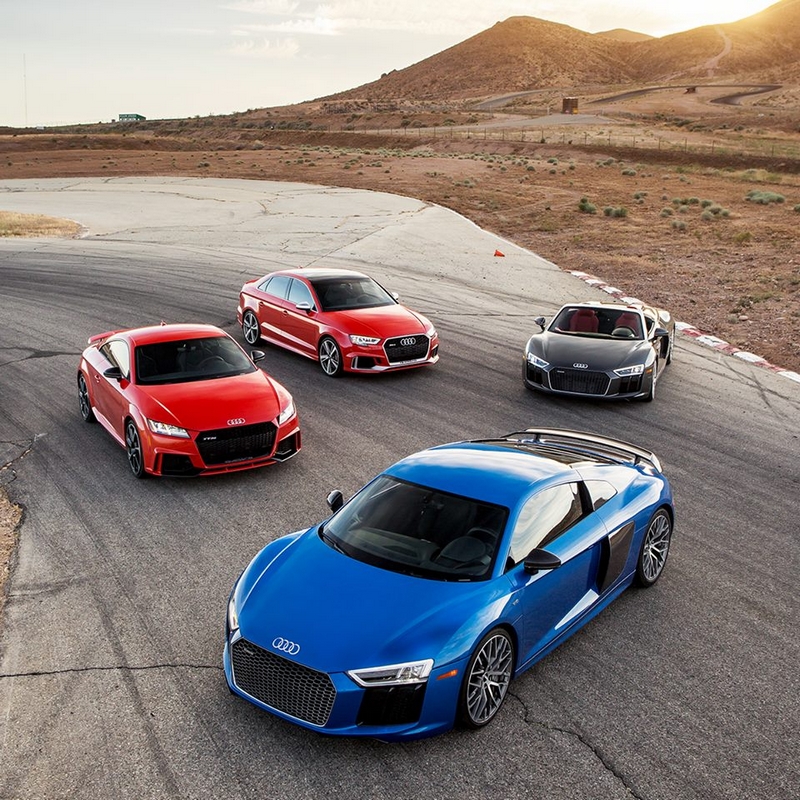 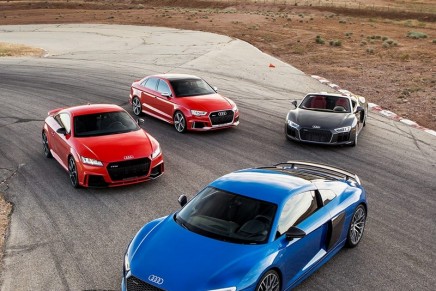 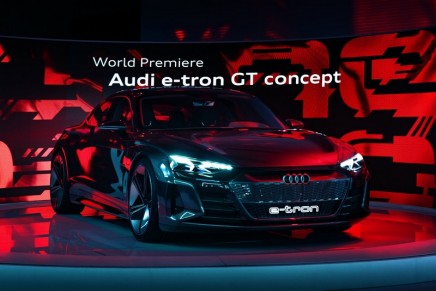 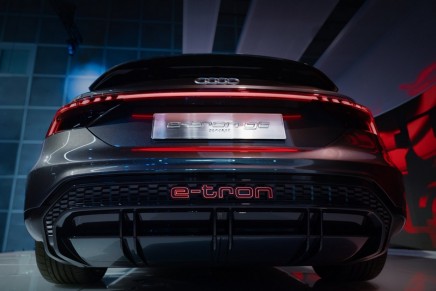 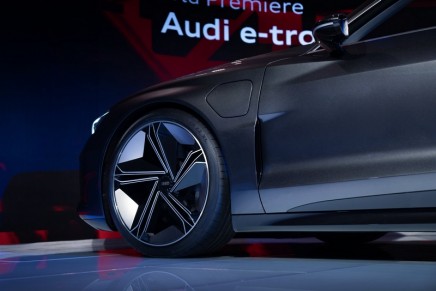 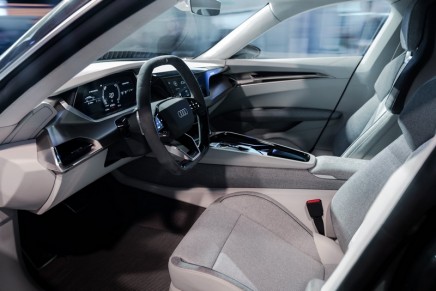 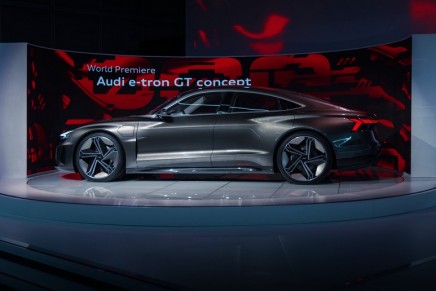 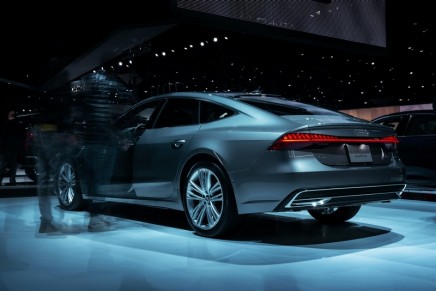 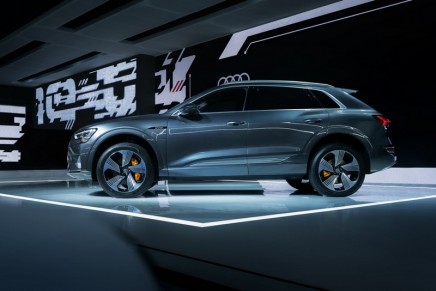 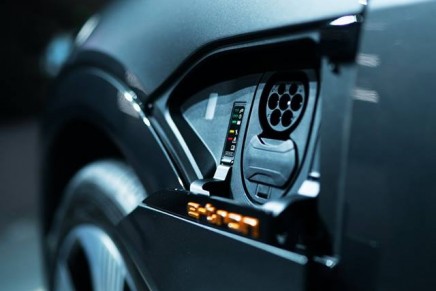