Dynamic, highly efficient and extremely comfortable: The new Audi Q8 combines the spaciousness typical of an SUV with the emotional lines of a coupe. The concept car is the basis fo the production model that Audi is now launching on the market.

Audi presented the Audi Q8 concept at the North American International Auto Show (NAIAS) in 2017. With this model the premium manufacturer is tapping into a new segment for the full-size class – an elegant alternative to the robust presence of a classic sport utility vehicle. The Q8 concept stands for maximum prestige. Propulsion is provided by a powerful, yet highly efficient plug-in hybrid with 330 kW of system output and 700 Nm (516.3 lb-ft) of torque. 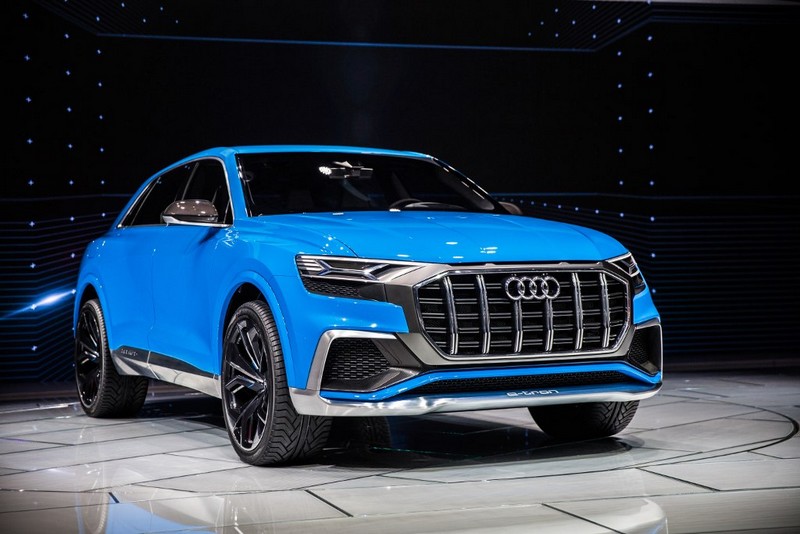 This article titled “Audi Q8 preview: ‘A vehicle born to impress’” was written by Martin Love, for The Observer on Sunday 22nd July 2018 05.00 UTC

Next month sees Audi launch the latest model in its ever-expanding line-up: the Q8. Don’t presume that just because it has the largest number in the range it also sits at the apex of the Audi pyramid. It is actually slightly smaller than the mighty Q7. It is also hard to pinpoint exactly what the Q8 is for. It’s a weird blend of a coupé and SUV. Who knew that was something we needed?

It follows hard on the heels of the equally pointless and fabulously fashion-conscious Mercedes GLE Coupé, Range Rover Velar and BMW X6 (automotive proof that class and cash can be mutually exclusive).

Final prices and specs for the Q8 have yet to be confirmed, but it is estimated that despite being smaller than the Q7 and only offering five seats as opposed to the Q7’s useful seven, you will pay a lot more. It’s hardly the practical choice, but then this car is about everything except practicality. It’s a vehicle made to be impressive. One look at the vast ‘single frame’ grille will convince you of that.

Lurking behind it is an equally huge engine. Badged the 50 TDi, the 282bhp 3-litre V6 is an all-wheel drive, eight-speed brute. Driver tech is abundant, as it always is with Audi. And the interior is a paean to luxury motoring and unconditional coddling. Maybe it’s not quite so pointless after all.