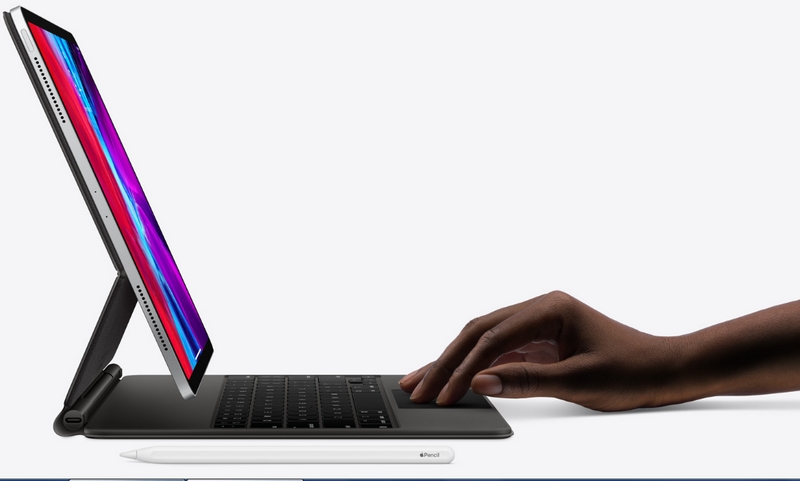 Your next computer is not a computer. @apple.com

The 2020 iPad Pro takes 2018’s wow-factor redesign and beefs up the camera on the back with lidar (light and radar) technology, commonly used in self-driving cars, not tablet computers.

Apple re-invented the iPad Pro in 2018 with a stunning design featuring large, beautiful screens with thin bezels, Face ID instead of a Touch ID home button, and squared-off sides.

The new £769 iPad Pro is essentially identical and just as stunning two years on as the original, here reviewed in its larger 12.9in form starting at £969 plus the Smart Keyboard Folio costing £199.

The tablet has four excellent speakers in the sides, a USB-C port, magnetic wireless charger for the Apple Pencil stylus and a little pogo-pin smart connector on the back for keyboard cases. There’s no headphones socket though.

The camera lump has grown on the back, mirroring that used on the iPhone 11 and 11 Pro, featuring a dual camera system and the lidar scanner – more on those in a moment.

The Apple A12Z Bionic processor is the same as the A12X Bionic used in the 2018 iPad Pro, but with an eight-core GPU instead of seven. It performs the same: fast and smooth.

Apple says the iPad Pro is more powerful than many full-blown computers; certainly Affinity Photo was faster performing the same complex edits on the iPad Pro than on the new MacBook Air with an Intel Core i3 chip.

Battery life wasn’t quite as good as the previous model when tested in 2018. The new iPad Pro manages more than eight hours of constant work between charges; enough for day’s work and watching a video on the commute home but not quite the 1.5 days working-day battery that 2018’s model managed.

Part of this discrepancy could be explained by the upgrade from iOS 12 to the more capable iPadOS 13.4, which does more, often concurrently, so will be more power hungry – but also more useful. With lighter use, such as reading or watching offline movies, the iPad Pro lasts well over nine hours between charges.

Charging the 12.9in iPad Pro with the included folding 18W charger took three hours 20 minutes from flat. Using 45W charger shaved more than an hour off that time.

Apple does not give a rated lifecycle for the iPad Pro’s battery, typically 500 full-charge cycles, but it can be replaced for £99. The tablet is generally repairable, with the out-of-warranty service cost being £616.44, which includes the screen. The iPad Pro was only awarded a three out of 10 for repairability by the specialist iFixit.

The iPad Pro has 100% recycled tin in the solder of its main board, flash and wireless charger and at least 35% recycled plastic used in multiple components. Apple is also using renewable energy for final assembly of the machine, and breaks down the tablet’s environmental impact in its report.

Since splitting iOS into iPadOS for Apple’s tablets and iOS for its smartphones, the iPad line has gained significant utility more befitting of a tablet computer.

The big new addition for iPadOS 13.4 is Bluetooth or USB-C mouse and trackpad support, an update available for a large range of iPads, not just the iPad Pro.

You don’t quite get a mouse pointer on-screen like a Mac. Instead you get a morphing blob that changes shape when near actionable items. A caret appears when over text like a Mac, but when you go near a button the cursor jumps to it, morphing into a light-grey rectangle highlighting the button. This instant selection reduces the precision required to click something obvious.

A trackpad is the best option for the iPad as it opens up a load of gestures many of which are similar to those on a Mac. Highlights include two-finger scrolling, three/four/five-finger swipes replicating iPadOS’s navigation gestures (up for home etc), and a five-finger pinch to see recently used apps. You can even two-finger or right click, which brings up what would be the tap-and-hold menu on icons and items.

The interface and cursor have a bit a momentum too. For instance, you can click the time to get to notifications or battery icon to get to quick settings, or you can fling the cursor to each respective cursor with a bit of force instead. To bring up the dock you need to fling the cursor to the bottom of the screen. It’s surprisingly fun, if using a cursor on a screen could ever be described as such.

Not all the usual interactions you expect are supported, such as a lack of hover-over for tool tips, which stops some functions in web apps from working. Some buttons also refuse to click, such as the back arrow in Evernote. Clearly, some third-party app developers will need to do some work.

Overall, trackpad and mouse support is fairly transformative for the iPad Pro as a work machine attached to a keyboard. It adds much-needed precision for text selection, working in spreadsheets and other office duties, while also reducing the strain of constant prodding of the screen.

The big new hardware addition to the iPad Pro for 2020 is a new dual-camera setup, similar to that used on the iPhone 11, and a lidar sensor.

The cameras are good for a tablet, but not as good as those on the iPhone 11. Fine for random snaps, but a phone is likely better for keepsakes.

The front-facing 7-megapixel camera is excellent for video calls – infinitely better than those fitted to Apple’s laptops. I wish it was fitted to the top in landscape, rather than portrait, which would be far better for use in a keyboard case.

The lidar sensor aids augmented reality (AR) apps. It measures the distance to objects up to 5 metres away, allowing more accurate placement of virtual objects into the real world, particularly when they’re placed behind real objects.

The measure app, for instance, is more accurate, as is Ikea’s furniture visualisation app. Other than the occasional points of interest, I have yet to be convinced of AR experiences through a tablet or a phone.

Therefore lidar feels like a future-proofing addition that will be useful at some stage, once apps that can truly take advantage of it have appeared.

The 2020 iPad Pro comes in space grey or silver, in two screen sizes, four storage options and versions with or without 4G.

It’s a feature that improves AR and may prove transformative down the line. But AR on a tablet remains niche.

Instead the big changes are software as part of iPadOS 13.4, which is also available for older models. It makes the iPad Pro more of a full computer replacement than ever.

I can finally get every part of my work done on the tablet, without resorting to hacky work-arounds or finishing on a PC. This review was written and edited, the photos imported and edited, and finally the lot inserted into the Guardian’s backend systems, something I’ve simply not been able to do before all on an iPad.

The 12.9in screen was big enough not to feel cramped, while some tasks were faster and others slower than when working on a Mac or PC. But, finally, the answer to the ever-present question hanging over the iPad Pro of “can you get real work done on an iPad” is: yes. And without massive adjustments too.

It may not be much different from the last one, but the 2020 iPad Pro is the very best mobile tablet you can buy – which it absolutely should be for at least £969 for the 12.9in version – and arguably a solid laptop or PC replacement.

Cons: very expensive, no kickstand without case, no headphone socket, will still need a PC for some tasks