Timeless micro mosaic: Anthemion by Mutaforma + Dylan Tripp is observing the flower with the sectioning gaze of the botanist. 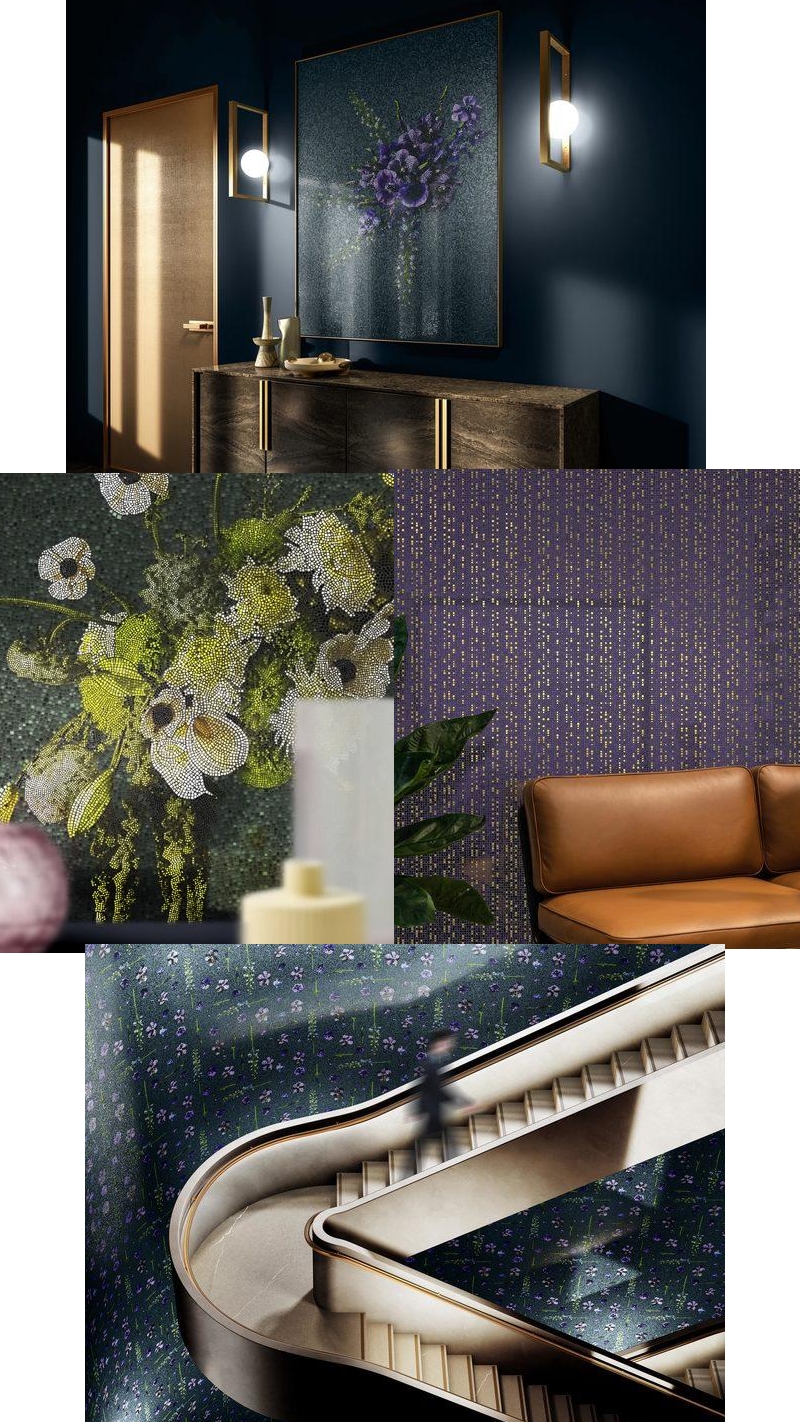 Anthemion – a collection of micro mosaic by Dylan Tripp for Mutaforma, the Italian high-end brand that realizes micro finishes for floor and wall decorations with glass mosaic.

Anthemion is the first collection created by floral designer Dylan Tripp for Mutaforma, a project that pays homage to the aristocratic charm of the planimetric vision of flowers, transforming their beauty on glass micro mosaic surfaces thanks to the company’s know-how and technologies.

With a special eye for shapes, colors and movement, Dylan Tripp gives life to small botanical worlds that reflect a style where spontaneity, elegance and poetry meet.

Just as the reality of flowers is made up of many parts, even tiny ones, in the same way the Mutaforma micro mosaic is made up of infinitesimale size tiles – the TILLA® glass tessera – which combine to create a whole.

“The meeting with Mutaforma was as fortuitous as it was illuminating. I did not imagine that mosaics and flowers had so much in common. The idea of color and movement from which I start and draw inspiration to create my floral compositions are the same stylistic elements that are needed for the design of mosaics. The thought of being able to work with a design company that makes a contemporary technique so rich in history and so tied to our millennial craftsmanship immediately loaded me with stimuli and ideas. Starting from the inspiration of ‘modified flowers’, we thought of highlighting the geometries and volumes that arise from my compositions, expanding them, isolating them and working on a color palette that was in nuance, to enhance them being an organic body,” added Dylan Tripp.

The central element of the collection is the floral world, represented by evoking – for elegance and aesthetics – the illustrated pages of one of the largest known florilegia, namely the Hortus Eystettensis of 1613, considered to be the father of all modern herbaria. The return of the floral as an extremely fascinating subject for artists and designers marks a point towards those elements that flowers represent: the decorative, the emotional, the grace, a sophisticated language of pure color and form that can be both raw nature and, as in this case, refined arrangement.

From the creative point of view, Anthemion does not want to be just a new creative representation of the floral world and some of its forms – which remains a must of the decorative patterns for this year too – but the representation of the artistic and technological talent of Mutaforma and its timeless mosaic, in this case used to expand and dissect together nature and in particular the floral universe, according to the designer’s vision. 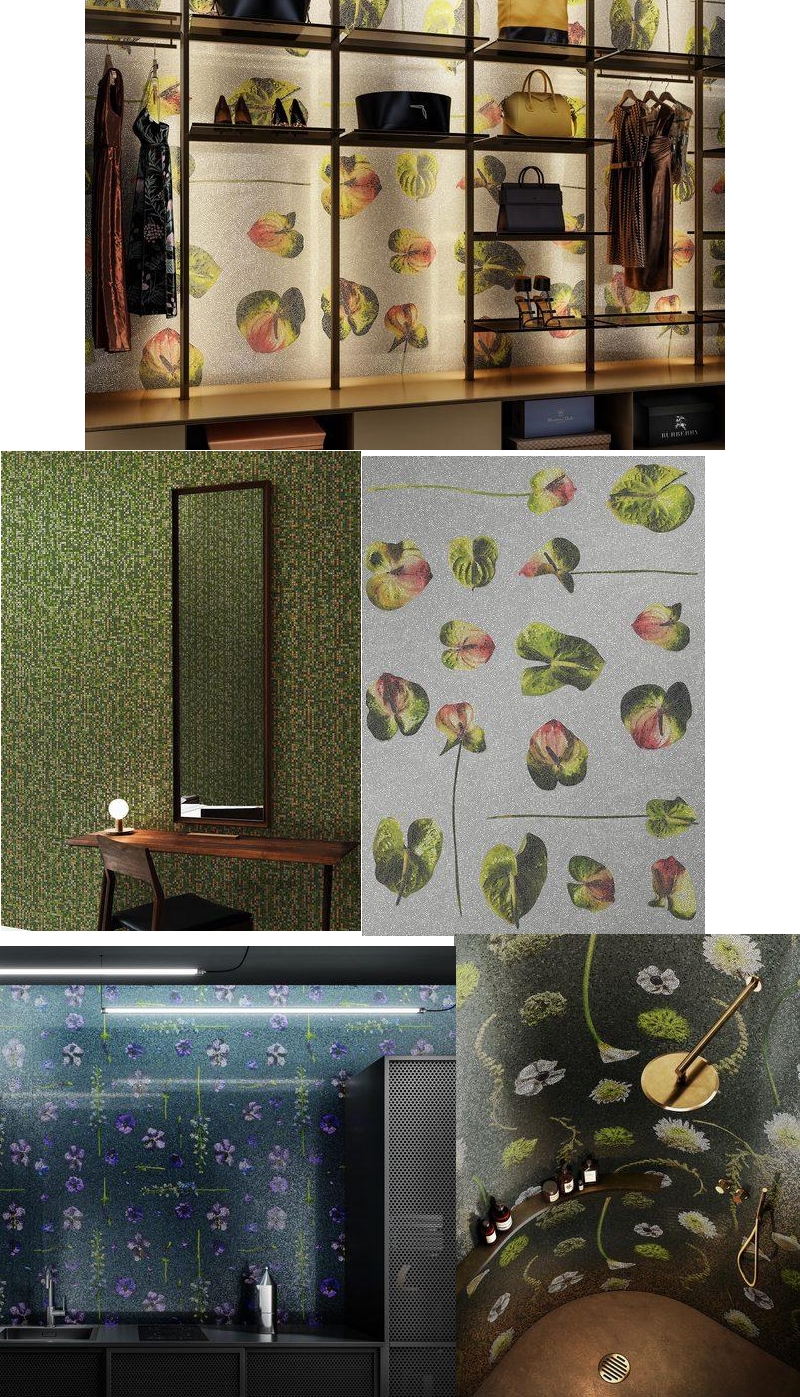 The formal principle of the collection is that of composition and decomposition.

Subsequently, with the arrangement and expansion of the floral parts – up to the so-called out of scale – a scenographic reproduction is obtained, without using the classic foliage of vegetation but observing the flower with the sectioning gaze of the botanist.

The selection of flowers was handled by the designer: these are floral species that are part of Dylan Tripp’s style and aesthetic apparatus and that go beyond traditional compositions. For this collection, Dylan Tripp therefore worked on three color ranges: blue, pink and green. The aesthetic and chromatic choice of the flowers has also been designed to be perfectly combined with the sophisticated color palette of the glass mosaic of the Mutaforma catalog.

The starting point was precisely the shades of violet and blue present in the flowers, creating unexpected combinations, such as orchids and anemones, but always linked by a precise chromatic intention, merged together with the veronica in an enveloping organic entity. Pattern: Cascades of flowers on velvet with the effect of whale blue that enhances the dark depth of the color palette.

The organic form that arises from this floral distortion has as inspiration the budding freshness of greens and whites. The result is a botanical sculpture that lives on its lightness, and thanks to the black background appears as a floral micro-world that gravitates in the universe. Pattern: The freshness of the color palette of this pattern is elegant due to the choice of flowers and their movement, such as calla, lilies and amaranthus. The dark center of the anemone acts as a link to the warm green of the background.

ANTHURIUM (pink anthurium and carnations) – A composition with a strong geometric component.

The anthurium, thanks to its structure, creates a very interesting volume, giving rise to a distorted explosion of the flower. The protagonist of this series is the strong contrast of colors. Acid green and white accompany pink which explodes in all its strength, with a result far away from the trivially romantic cliché of this color. 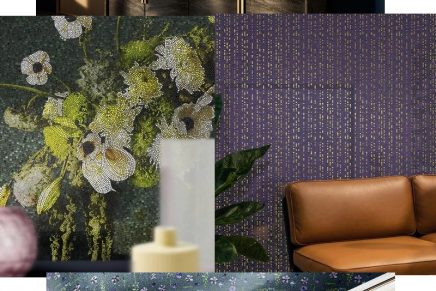 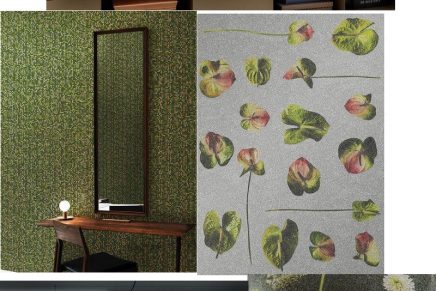