“We hope to open in the Summer of 2020 to show these seminal works by the celebrated British sculptor Anish Kapoor will go on show across the grounds and historic interiors of Houghton Hall in Norfolk for the exhibition Anish Kapoor at Houghton Hall,” announced houghtonhall.com.

The exhibition will feature 21 sculptures as well as a selection of drawings and smaller works representative of Kapoor’s ground-breaking body of work created over the past 40 years. Presented together, this series of works will challenge the classical architecture of the house and the idyllic beauty of the grounds, whilst being in continuous dialogue and engagement with Houghton’s history.

Anish Kapoor is one of the most influential sculptors working today, known for creating ambitious public sculptures adventurous in both form and engineering across vastly different scales and materials. 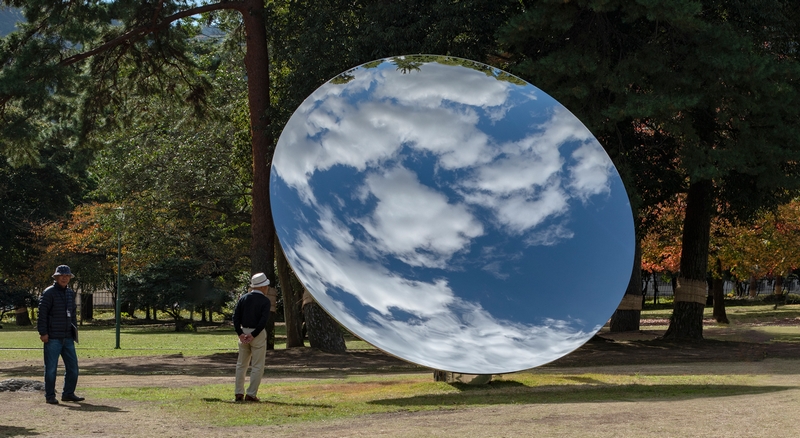 This article titled “Anish Kapoor: ‘Artists are not makers of luxury goods'” was written by Sarah Crompton, for The Observer on Saturday 14th March 2020 18.00 UTC

British-Indian artist Anish Kapoor, 66, is mounting his largest-ever UK exhibition of outdoor sculpture at Houghton Hall in Norfolk from late March, including his famous Sky Mirror, a five-metre stainless steel disc that turns the world around it upside down.

What kind of things did you want to show at Houghton Hall?
It’s one of the great houses of England, with a great history, and extensive grounds. I decided the stone works that I’ve made over the past 25 years, and I’ve never shown in the UK before, would sit quite well there. Then it felt right to put in some mirror works, and put the Sky Mirror in the grounds. It came together as quite a precise project.

What are you investigating with the stone sculptures?
Most stone carving, over the last centuries, has been to have a block of stone, and then carve, like Michelangelo did, from outside in. What I’ve been doing, perversely, is to carve the interior. The block stays as it was quarried, and then I’ve been working on the inner form.

Do you have a sense of yourself when you mount a retrospective exhibition?
Yes, inevitably. I don’t like retrospectives, really. I’m looking to bring to life bodies of work that I hope make sense together. I seem to have a disjointed practice, because on the one hand I’m making these very geometric, very pure objects; and on the other my work is messy and all over the place – whether it’s a great pile of wax or these ritualistic paintings that I am making for an exhibition at the Modern Art Oxford gallery in September. Yet they are one practice – and they are, in a way, very similar to each other.

What’s your overarching description of what you do?
Oh God, I’ve no idea! [Laughs] I really do feel very strongly that I have nothing to say; I have no message to give the world and nor do I want to give the world a message. What I’m looking to do is to make objects that question the nature of objects – stones that are empty; heavy that’s not heavy, black objects that veil themselves…

The black objects you are making with Vantablack, the world’s darkest black substance, will be shown for the first time in the Accademia in Venice next year. They are thrilling…
I’m very excited by them. The material is, in a way, mythological. Imagine being able to describe a material as the blackest in the universe – including black holes. That’s kind of daft, isn’t it?

How do you think it is now for young artists?
Incredibly difficult. I think the art world is in severe difficulty. At one level, it’s booming. But what does that mean for artists? We are not makers of luxury goods.

I am part of that system too, so I’m not speaking as an outsider. But if everything’s for sale, how is it possible to find anything that’s radical? It’s so hard to maintain one’s distance from the commodification of the object.

And for young artists today, it’s impossibly hard to find space in London, it’s so goddamn expensive. When I first had a studio in east London in the early 80s it cost £5 a week…

What advice would you give to someone starting out?
It’s taking your metier as an artist thoroughly, absolutely, totally seriously. It’s not a part-time activity… it is what we do all the time. Perseverance and endurance, or something like it, that’s what you need.

Do you still work every day?
Oh yes, I have a practice. I think Mae West once said: “I’m so tired of being admired.” I’m so tired of being inspired. Inspiration is marvellous, but it’s not really about that. I work a very normal day, 8.30am to 7pm, five days a week – I don’t work on a weekend. And it’s through the practice of working that things occur. It doesn’t matter what you do. Just do it.

You were vocally opposed to Brexit. What’s your feeling now?
It continues to be a disaster. Psychically it’s about where we are and how we see ourselves. This idea that Britain can do special deals and play a big nation… I think it’s a fantasy. An isolationist, sad fantasy. Yet political discourse has almost ceased on the subject. I hope it will return.

Would it make you think about leaving?
I’ve had serious thoughts about leaving. And sad thoughts, because I’ve been here 40 years.

Why do you feel the need to speak out?
We’re all citizens, and as citizens we have a voice. I feel it’s important to engage, but I do believe that’s different from agitprop. My art has its political position but it isn’t speaking in a political voice. But as a citizen I do! And so, stupid or otherwise, I’ll continue.

You’ve recently managed to stop the National Rifle Association of America using an image of your Chicago sculpture Cloud Gate in one of their films…
Yes, I did. They put out a vile little film using public objects as images of the so-called liberal invasion of traditional American space. I thought the whole way it was done was revolting, so I decided to fight on the basis of copyright. A group of American lawyers took it on pro bono, and I agreed to pay their expenses. They say it was the first action to cause the NRA to retreat from a position, and they’ve been retreating ever since. Yay!

On the subject of public sculpture, The Orbit, which you designed for the Olympic Park in east London, is apparently losing a lot of money…
It was made as a public sculpture, then Boris Johnson, in his previous incarnation [as mayor of London], turned it into a – what do they call it? – a visitor attraction. Oh, Jesus!

I could have had a war with him, but I didn’t want to. But it always was a bad idea, according to me. Either you do something as a public object, or it’s a commercial enterprise. To mix the two up is confusion. It doesn’t work.

Generally, you always seem enthusiastic and curious. Is that true?
I’m an idiot, you know. Just deeply engaged in what I’m doing. I’m not interested in doing what I know how to do. I’ve just had my 66th birthday and I hope I can work with the same kind of idiotic enthusiasm that I had when I was 20.